They've kept the fan-base happy. Now, let's see what they do with the players.

Faced with a clubhouse crisis and a fed-up fan-base, the Toronto Blue Jays on Saturday removed the most polarizing figure in club history when they fired general manager J.P. Ricciardi with a year remaining on his contract. The move was made in Baltimore, where the team will play its penultimate game Saturday night after a meeting with interim president and chief executive officer Paul Beeston.

The meeting comes after high-profile players such as Vernon Wells and Aaron Hill went public with concerns about manager Cito Gaston's relationship with the players. It's an issue that was first noted two weeks ago in The Globe and Mail but bubbled to the surface Friday in a CBS Sports report that the clubhouse was in danger of open mutiny against Gaston.

Canning Ricciardi is the easy part.

Alex Anthopoulos, a 32-year-old native of Montreal who went to McMaster University - and started his career at 23 as an unpaid intern helping break down video for the Montreal Expos - was promoted to vice-president of baseball operations and assistant general manager in 2006. Now he will replace Ricciardi effective immediately.

Beeston said that he will have a replacement for himself named as early as mid-October, although there are suggestions that Beeston will stay on as a baseball advisor. Anthopoulos's move will be popular, since he is well-respected among agents and baseball people and fits with Beeston's instinct to mentor Canadian-born baseball executives.

The move was not unexpected. Ricciardi, who joined the Blue Jays in November, 2001, has been with the team for eight years and has one year left on his contract and may end up moving into broadcasting. The Blue Jays are 75-85 going into Saturday's game against the Orioles after an unexpectedly strong start to the season.

Hired to replace Gord Ash after the Minnesota Twins refused to grant permission for the Blue Jays to speak to Terry Ryan and after David Dombrowski turned down the job to become president and general manager of the Detroit Tigers, Ricciardi came in on the coat-tails of Oakland Athletics GM Billy Beane preaching the gospel of Moneyball. His willingness to shed payroll and staff made him a good fit in the initial days of Rogers Communications's ownership of the team, although Ricciardi would later tell people that he was prepared to cut down even more only to have ownership tell him the team still needed some semblance of a competitive lineup because it was, after all, a television property, too.

Being owned by a large corporation whose focus is in other areas is a recipe for disaster in the current economic climate surrounding professional sports - the only thing worse than having Vernon Wells bat cleanup is dealing with shareholders - and Ricciardi could always count on the savvier elements of the club's fanbase to nod in agreement whenever he'd wring his hands and say the team didn't have the financial jam to compete with the New York Yankees and Boston Red Sox.

Then, along came the 2008 Tampa Bay Rays and their World Series appearance - and that excuse pretty much went out the door. If you want to know when the clock finally started ticking down on Ricciardi, it was when the Rays went to the Series and Paul Godfrey stepped down as president and chief executive officer to be replaced on an interim basis by Beeston - who was undyingly loyal to Gaston (with good reason, since the manager skippered the Blue Jays to back-to-back World Series) and who over the course of the summer widened his search for a president away from a facilities management guy to someone with a baseball pedigree.

Coaches, managers, trainers, players, reporters - Ricciardi left a lot of road-kill along the way, as usually happens when somebody spends eight years in a GM's job.

He fired Buck Martinez - who was wholly unprepared to be a major league manager - after the start of the 2002 season and replaced him with Carlos Tosca, who would in turn be replaced by John Gibbons, a long-time minor-league manager and Ricciardi's former roommate in the minor leagues.

But the constant managerial shuffle did nothing to get the Blue Jays past the Red Sox and Yankees in the American League East. Neither did a spending spree in the off-season before the 2006 campaign that saw Ricciardi summoned from his home in Worcester, Mass., just after Christmas and told that Ted Rogers had - in one of his mercurial moments - decided to commit $250-million to payroll in addition to purchasing the Rogers Centre. Ricciardi signed free-agent pitchers B.J. Ryan and A.J. Burnett and gave Roy Halladay what would turn out to be a shrewd contract extension. He would later negotiate extensions for Wells, Alex Rios and Aaron Hill. Two of those deals - those of Wells and Rios - are the worst contracts in club history.

But at the time, Ricciardi was widely lauded locally because after a messy split with Carlos Delgado, keeping Wells especially was seen as an article of faith with Blue Jays fans - even though the terms of the contract have now become a millstone around the franchise. And Anthopoulos, his replacement, was involved in the negotiations. Rios was cut; Wells has five years remaining on a $127-million deal.

Ricciardi's strength was filling in the edges with bargain basement free-agent signings and under-the-radar trades for players such as shortstop Marco Scutaro and pitcher Scott Downs. His major fault was spending money and "sunk costs," something high-payroll teams like the Yankees and Red Sox can afford to do. He gave Burnett an opt-out clause (giving in to an 11th hour demand), gave free-agent Frank Thomas a vesting option that ended up costing the club $8-million when he was cut in the second year of the deal, and had to swallow $15-million this year when Ryan was released with a year and a half left on his contract after a sudden drop in velocity and effectiveness. The Blue Jays also had to swallow some of Corey Koskie's $17-million deal when they traded him to the Milwaukee Brewers.

Ricciardi came in at a time when baseball was embroiled in a bizarre sort of civil war resulting from the publishing of the book Moneyball, in which author Michael Lewis went behind the scenes with the Athletics and trumpeted Beane's statistics-based system of management. Many of the book's anecdotes painted a harsh picture of old-time baseball guys, particularly scouts, as tobacco-chewing dinosaurs more comfortable with qualitative than quantitative analysis. One of Beane's tenets was that small and mid-market teams needed to focus on drafting as many close-to-major-league-ready players as possible, even if that meant eschewing higher-ceilinged high-school players.

Ricciardi was a proponent of that system initially and while Hill, Shaun Marcum, Adam Lind and Ricky Romero are products of it, Ricciardi has never lived down drafting Russ Adams with his first ever first-round pick and it was only this year that his choice of Romero ahead of shortstop Troy Tulowitzki stopped looking like one of the worst Blue Jays draft decisions of all time. By the end of his tenure, Ricciardi was no longer regarded as a Moneyball guy.

Ricciardi's personality emerged as an issue very quickly. His firing of long-time Blue Jays employees effectively ended a comfort zone that had surrounded the team stretching back to the mid-90s, and it didn't help that he and Godfrey contributed to the sense that he was coming in as what one former Blue Jays official called "the smartest kid in the class … when all he's doing is trying to invent the wheel."

Ricciardi was outspoken, preceded Toronto Maple Leafs general manager Brian Burke in using the airwaves to his advantage (Ricciardi was a Fan 590 staple), and enjoyed a riposte. Much of that came from his New England background, where discussion of the Red Sox' trials and tribulations is part of the daily bread. But Ricciardi got his back up when he felt attacks became personal - particularly rankling at continued shots taken at him for moving his family back to Worcester, Mass., after just a year of living in Toronto.

Earlier this year, Beeston asked Ricciardi if he would consider moving his family to Toronto in order to become president of the team. It was not a job offer as much as an inquiry of interest, but Ricciardi said no.

Ricciardi was unafraid to use the media to further his agenda and was particularly at home currying favour with certain U.S.-based correspondents. In the Internet age, he was a dream to have on your side and a nightmare to work against. He treated some segments of the Toronto media rudely - writing off Ryan's elbow injury as a back problem three years ago led to his now-infamous assertion that "It's not a lie if we know the truth," - and while Halladay's availability at the trade deadline was pretty much a given from the start of the year, it was when Ricciardi openly discussed trading Halladay first with Danny Knobler of CBS Sportsline and then Ken Rosenthal of Fox Sports that the issue exploded.

But in the end, Ricciardi's dealings with the media have the stuff of parochial, inside-baseball skirmishes that would have mattered naught to the fans had his teams won.

But they didn't. The bottom line is that after eight years the Blue Jays are no closer to the postseason than they were when Ricciardi took over and they have a fan base that is almost completely disengaged.

This was the first step in changing that disengagement. The easiest step. It can't be the last.

Questions come easily, but who's got the answers?
October 2, 2009
Ricciardi's reign in Toronto
Gallery
October 3, 2009 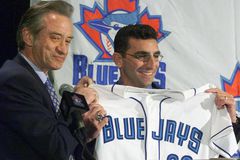 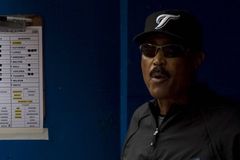 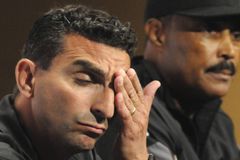