It took quite some time, but Carlos Beltran finally got there, winning a World Series title after 20 seasons in the majors.

Now he is leaving the Houston Astros and leaving baseball, retiring after a career in which he was a nine-time All-Star and was Rookie of the Year. The 40-year-old designated hitter and outfielder made the announcement Monday, 12 days after the Astros beat the Los Angeles Dodgers in Game 7 of the World Series.

He announced his retirement in an essay written for The Players' Tribune website. His story touched on what finally winning a championship meant to him.

"I realized early on that my purpose in this game was to share knowledge with younger players and to give back to the game of baseball," he wrote. "I always wanted to do that – that, and be the best teammate I could possibly be. Over 20 years, I feel like I accomplished that.

"So whether we won or lost Game 7, I would have still been happy with my career. But it still feels nice to have a ring," he continued.

Besides being named an All-Star nine times, most recently in 2016, and the 1999 AL Rookie of the Year, he won three Gold Glove and two Silver Slugger awards.

His production dropped dramatically this year. He hit .295 with 29 homers and 93 RBIs for the New York Yankees and Texas in 2016. He then batted .231 with 14 homers and 51 RBIs for Houston. Despite that, Beltran's veteran presence and his work with Houston's younger players including Jose Altuve, Carlos Correa and Marwin Gonzalez proved invaluable for the Astros.

"He was worth every penny for us ... he helped us win in a lot of ways, even though his numbers were not what they were last year, he contributed in a lot of ways that were not really seen by our fans," Houston general manager Jeff Luhnow said. "They were talked about a lot by our players. Also I think people know what I'm talking about. He really was a player-coach for us this year and he contributed in ways that lead me to believe there's no way we win the championship without him this year."

This season was Beltran's second stint with the Astros, after he was traded to Houston in June 2004. His work that post-season remains one of the best playoff performances in history. He hit .455 with four homers and nine RBIs in an NLDS win over Atlanta, then batted .417 with four more homers and five RBIs before Houston was eliminated by the Cardinals in the NLCS.

Beltran appeared in 10 games this post-season, including three in the World Series. He finished with three hits, including two doubles, and an RBI in helping the Astros to their first title.

Many of his current and former teammates expressed their gratitude and appreciation for Beltran on social media after his announcement on Monday. Correa posted a picture of the two of them on Instagram with a caption that read in part: "I will always look up to you brother! Thanks for making me a better player and a better person! I'm going to miss you so much!"

Houston right-hander Justin Verlander tweeted about Beltran's retirement, writing: "We only played together for a short time but what a ride we had! I learned a lot about what being a veteran means and the impact we can have. You're an amazing teammate and leader. What a way to bow out ... a World Champion!"

Yankees general manager Brian Cashman wouldn't say whether Beltran was a candidate to replace Joe Girardi as his team's manager. But he did rave about his career and the respect he has for him.

"He had leadership qualities, no question about that," Cashman said. "He was someone that people gravitated to in the clubhouse. I think managers or coaches could rely, or front offices could rely on (him), kind of directing things in a positive way or keeping the ship steered in the right direction."

After what Luhnow saw from Beltran in Houston this season, he could envision him becoming a manager one day.

"Certainly. He's one of the brightest minds I've come across in the game," he said. "Now whether or not, I haven't (spoken) to him about what is intentions are after this, but I think he certainly would be a tremendous asset to any organization in whatever capacity he chooses to contribute." 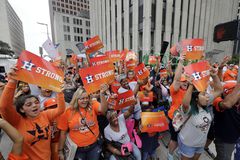 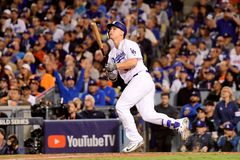