It is a trend that is as confounding to R.A. Dickey as the floating knuckleball that he has utilized to resurrect his career.

The first couple of times through the batting order, the Toronto Blue Jays No. 1 pitcher will exert his will against opposing batters, who more often than not depart the box muttering to themselves in abject failure.

Then, as the hitters somehow become more comfortable with the unpredictable nature of the pitch that Dickey is serving up, the hits start to flow, the walks begin to surface, and the supposed ace is suddenly the second coming of Josh Towers.

It happened again on Tuesday night, only this time Dickey was bailed out late by a fine seventh-inning intervention by the bullpen, led by lefty Brett Cecil, who struck out the always dangerous Adam Jones and Steve Clevenger with the bases loaded in a 3-3 game.

And the Blue Jays, powered by a trio of three, three-run home runs, would go on to savour a 9-3 victory over the Baltimore Orioles in the first of a three-game set at Rogers Centre.

The same uneven outing was exhibited by Dickey in his previous start Thursday in Minnesota where he was cruising along, shutting out the Twins through four innings.

In the fifth, Dickey could only manage one out, coughing up five earned runs in what amounted to a 7-0 whitewashing

So, Mr. Dickey, what is it with these late-inning meltdowns of late?

Dickey denied it has anything to do with hitters becoming accustomed to the nuances of the knuckler as the game wears on.

"I'm not as sharp," Dickey said. "Because the pitch does something different in all their at-bats leading up to that third-fourth time through the lineup it's much more of a stuff thing for me rather than a lack of what the pitch is capable of doing multiple times through the lineup.

"I lose some sharpness in those later innings, those middle innings, those fifth, sixth, seventh innings. But I feel like I'm a good enough pitcher to be able to survive them and be able to give us a chance to win. But I haven't executed a couple of pitches when I've needed them lately."

Dickey was enjoying a special night against the Orioles through the first five innings, mowing down a pretty good hitting Baltimore lineup with relative ease, allowing two measly hits and facing just two batters over the minimum.

But in the sixth inning, as Baltimore hitters were getting their third look at Dickey, his night began to falter.

His troubles began with a leadoff double stroked by Steve Lombardozzi, a blooper into shallow left field that should have been caught were it not for a miscommunication between Melky Cabrera and Jose Reyes, who were both converging on the ball.

Then Dickey issued his first walk of the game to Nick Markakis before Nelson Cruz launched a 1-1 pitch into the left field seats that provided Baltimore with a 3-0 lead.

Fortunately for Dickey, the Blue Jays bats had his back.

Edwin Encarnacion, who had gone the first 19 games without stroking a home run, stroked a three-run shot in the bottom of the frame to pull the Blue Jays back into a 3-3 tie.

It was a harbinger of things to come as third baseman Brett Lawrie and then Cabrera both swatted three-run home runs in the eighth to seal the deal for the Blue Jays.

As for Dickey (1-3, 5.90), he departed with a no-decision after struggling once again in the seventh inning, failing to register an out and leaving the game with the scored tied at 3-3 and runners at second and third.

The win was picked up by reliever Steve Delabar, who came on in the eighth inning where the Blue Jays put up a six spot on the board for the win.

"Gosh, you take away three innings [from the year] and it's a whole different stat line," Dickey said. "And so that's encouraging. I know I'm very close." 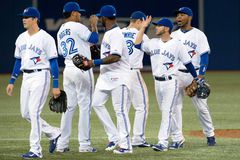