Blue Jays outfielder Jose Bautista flips his bat into the air after hitting a three-run homer in the seventh inning against the Texas Rangers in Game 5 of the American League Division Series on Oct. 14, 2015 in Toronto.

The Toronto Blue Jays were an offensive juggernaut last year, slugging their way to a league-best 232 home runs. Explore the data behind the biggest hits, from the big picture to the finer details, how pitching strategy both enabled and defeated batters, and take a closer look at the team's trio of powerhouse hitters

Jose Bautista's bat-flipping-worthy home run in Game 5 of the American League Division Series may have been the biggest hit of 2015, but it wasn't out of the ordinary for a team that landed on top of almost every offensive category in the regular season.

After months of underperforming their run differential, the Blue Jays stormed their way to their first American League East division title and playoff berth since their back-to-back World Series wins in 1992 and 1993. Throughout the regular season, the Jays went on two 11-game winning streaks, scored 127 more runs than the next highest-scoring team, racked up six grand slams and five walk-off blasts and were one long ball away from setting an American League record of three batters with at least 40 home runs each in a season.

As the 2016 season gets underway, here’s a closer look at the data behind one of the categories in which the Blue Jays excelled last year: home runs. Explore our in-depth look at all the big hits, the history, the pitches and the team’s top three powerhouse hitters.

Where each home run landed

In 2015, 18 different Blue Jays combined for a league-best 232 home runs. Only three other teams – the Houston Astros, the Baltimore Orioles and the New York Yankees – had more than 200 hits leave the park.

Choose a batter and select a dot to explore data on each home run.

How the long ball broke down

Blue Jay hits left the park in 121 of 162 regular season games in 2015, with at least one home run occurring in every series the team played. In almost half of those series, the Blue Jays hit five or more home runs. In games where they homered at least once, the Blue Jays went on to win 69 per cent of time.

Sort all 232 home runs by the following filters.

How the Jays fared against pitching

A closer look at the top three Jay sluggers 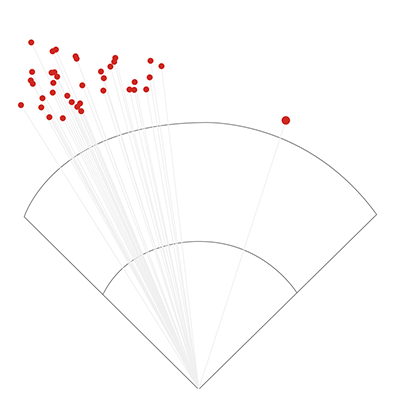 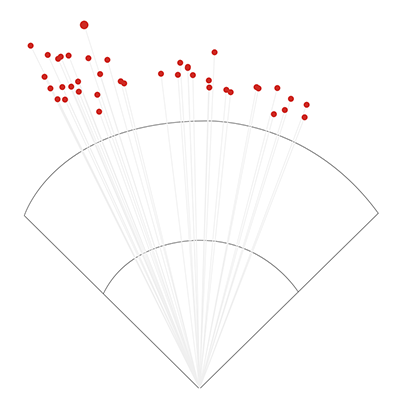 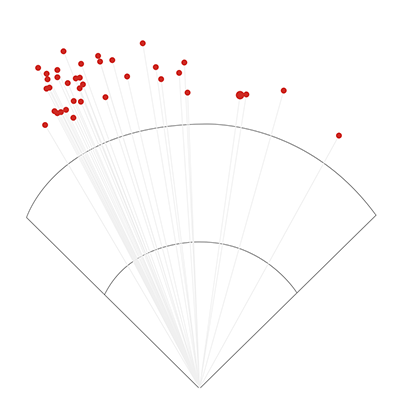 Josh Donaldson may stand out among Blue Jays players for his MVP-winning season thanks to his performance both on the field and at the plate, but Jose Bautista and Edwin Encarnacion more than kept up with him offensively.

The three sluggers were responsible for 41 per cent of the Blue Jays runs and 52 per cent of the team's home runs. Their 120 combined home runs is a number good enough to rival the three teams that scored the fewest home runs last year: the Atlanta Braves, the Miami Marlins and the Philadelphia Phillies. It's also a stat that broke the franchise record for home runs hit by a trio – Jose Canseco, Carlos Delgado and Shawn Green combined for 119 long balls in 1998.

All three landed within the league's top-10 home run hitters. Both Bautista's and Encarnacion's numbers were higher than average. Bautista's 2015 total is his third-best in seven full seasons as a Blue Jay – he hit 54 in 2010 and 43 in 2011 – and Encarnacion had his second-best year for home runs in six full seasons with the team – his best was 2012 with 42. Donaldson was in his first season with the Blue Jays.

Together the trio was responsible for batting in 41 per cent of the team's total runs – good enough for each to claim a top-five showing on the league's RBI leader list.

Individually, the trio racked up some impressive records throughout the year. Donaldson hit three walk-off home runs, a franchise record, and hit his 100th career long ball on Sept. 7. His American League MVP award is just the second for a Blue Jay – outfielder George Bell won in 1987.

Both Bautista and Encarnacion hit their 250th career home runs during the season. Bautista added a grand slam to his name and surpassed Vernon Wells for second place on the list of Jays all-time home run leaders. Encarnacion hit three grand slams and one walk-off home run. His nine RBIs in a single game on Aug. 29 ties a team record set by former third baseman Roy Howell and his 35 RBIs in August set a franchise record for RBIs in single month.

In their first postseason appearance in 22 years, seven Blue Jays combined for 14 home runs in eight playoff games. They hit eight against the Texas Rangers and six against the eventual World Series champions, the Kansas City Royals. Bautista led the team with four postseason home runs, including his now-legendary bat flip and an eighth-inning, game-tying, two-run blast in Game 6 of the ALCS. The Royals would score once more later that game to eliminate the Blue Jays and their hopes for a third World Series pennant.

Source: Unless otherwise noted, data is courtesy of MLB Statcast