The first time professional athletes frolicked on fake grass in a regular-season setting was on April 18, 1966, when the Houston Astros played their home opener at the Astrodome on AstroTurf, the revolutionary artificial surface touted as the next cutting-edge advancement in sports.

Ron Taylor, a Toronto native who was a key reliever with the New York "Miracle" Mets of 1969, was on the Astros' pitching staff when the ground-breaking moment occurred. Now a physician in Toronto, Dr. Taylor still recalls stepping out onto the new-fangled surface for the first time – and knowing the marriage between artificial grass and Major League Baseball would be tenuous at best.

"I didn't like it," Dr. Taylor said in a recent interview. "It was like playing on a gymnasium floor."

Unlike peanuts and popcorn, hotdogs and beer, the combination of synthetic sports fields and the game of baseball has always been an uneasy relationship.

After experimenting with artificial surfaces of one sort or another for half a century, most of the 30 teams in the MLB have concluded that – for reasons ranging from the health of their players to the aesthetics of the grand old game – the grass is not always greener on the other side.

This year, only two of the 30 Major League teams began the season on synthetic turf: the Tampa Bay Rays, who play at antiquated Tropicana Field, and the Toronto Blue Jays, who are at Rogers Centre, a domed facility where the retractable roof is closed more often than it is open.

And with the Rays actively pursuing a new stadium and the Blue Jays hoping to have grass growing indoors at Rogers Centre by the start of the 2018 season, fake fields in baseball could soon go the way of the bullpen golf cart.

"Unlike a lot of the other domes that are out there where the roofs are normally left open, this will be the first facility where the grass will actually be growing predominantly in an indoor environment," said Eric Lyons, an associate professor in turfgrass science and physiology at the University of Guelph.

The Blue Jays and the university are close to formalizing a business arrangement that will see the institution oversee the science of getting grass to grow within the stadium. Currently, six MLB stadiums have retractable roofs, with Rogers the only one not sprouting real grass.

At Miller Park in Milwaukee, for instance, large panes of glass in the roof allow for sunlight to nourish the turf even while the roof is closed. At Minute Maid Park in Houston, 50,000 square feet of glass in the west wall of the roof serves the same purpose. At Safeco Field, home of the Seattle Mariners, the low light levels of the Pacific Northwest, combined with shadows from the ballpark, necessitated that a sophisticated artificial "grow light" system be incorporated into the stadium's design.

Andy McNitt is a leading authority on all grasses, both natural and artificial, as the director of the Center for Sports Surface Research at Penn State University. He is also a long-time member of the U.S.-based Sports Turf Managers Association. McNitt sees no reason why the Blue Jays will not be able to lay grass down within Rogers and have it thrive.

"It's going to be a big investment in the lights, but certainly we have the technology to grow grass indoors," he said.

Lyons is planning to set aside an area within Rogers Centre – away from the current playing field – to start growing different species of grass to see what best thrives.

"The idea would be to start to grow and screen several grass systems and to create an environment similar to field level at Rogers Centre with the roof closed," he said. "And then we'd bring in the artificial lights and traffic the different grasses to see how they hold up."

By traffic, Lyons essentially means having the grass walked or run on, or subjected to the sort of treatment it will receive over the duration of a baseball game. There are also machines that can mimic the natural wear and tear on a sports field.

Another critical component, he said, will be figuring out the exact lighting to install within Rogers Centre to keep the grass healthy.

"We'll need to find out how much the roof will be open, how much natural light it's going to get, what the patterns of shade are when we do open the roof," Lyons said. "We're also going to want to know what the levels of light are during the day when the roof is closed."

At the height of its popularity, as many as nine MLB teams were playing on artificial turf in any one season from 1982 to 1995 and again in 1998 and 1999 when the Rays joined the loop, according to data provided by the league.

Since then, as teams moved into new venues or existing stadiums were upgraded, ballclubs have reverted back to natural grass as the surface of choice.

"Baseball's always been a traditional sport," McNitt said. "And I think the game started to move away from it primarily when we started to get away from those old multi-use, cookie-cutter stadiums, the old concrete donuts like they used to have in Philadelphia and Cincinnati that housed both football and baseball. And the game is played, primarily outdoors, during the warmer months when the sun is out and real grass just has a better look and feel."

Also, the game on artificial turf is not the same. The ball bounces higher and scoots faster along the ground. Pitchers, such as Dr. Taylor, loathed the faux grass, as it ultimately resulted in more hits and a higher earned run average.

"I threw a sinking fastball and I relied on ground balls to get people out," Dr. Taylor said. "Playing on the AstroTurf, the balls travelled faster and a lot of those outs would get through for singles. I really didn't like playing on it at all."

Colby Rasmus, the Blue Jays centre fielder, said from a performance standpoint he doesn't mind playing on artificial surfaces. "The ball bounces higher off the turf and the ball's getting to you quicker, which I like," he said. "In some of the parks I play in with thick grass, the ball takes forever to get to you."

John McDonald, the former Blue Jay infielder now playing for the Los Angeles Angels, is a defensive specialist who sees artificial turf as an advantage.

"On grass it's a little tougher to run and the dirt along the base paths gets chewed up a bit and the ball doesn't always have a true bounce," he said. "On the turf, everything stays more or less constant and you get a bounce you can trust over time."

The one thing most players agree on is that playing on artificial surfaces extracts more of a physical toll on the body. "Your back gets stiff a little bit," said Blue Jays shortstop Jose Reyes. "And you also feel it in your legs, your knees." Many players, including Reyes, soak in a tub filled with ice water for 15 to 20 minutes after nearly every game on artificial turf.

If the Guelph team works its magic, the Blue Jays will no longer have to cope with the concrete-backed impact of fake turf. And, Lyons notes, the significance of the research could go beyond baseball.

"The more we learn about how to grow plants indoors, the more we learn about how plants grow," he said. "So we're not just helping the Toronto Blue Jays grow grass in a dome. We're understanding how plants take carbon dioxide and produce plant material, whether it be food or biofuels or whatever, and how much water it takes to do that and all those things. There's so many great scientific physiological questions we can ask while solving the Toronto Blue Jays problem." 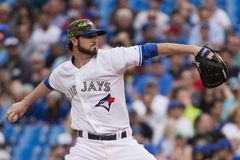 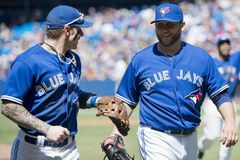 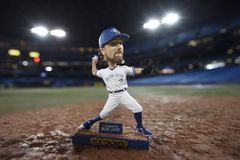