More than 40,000 people will trundle through the turnstiles at Rogers Centre on Sunday afternoon for the finale of a three-game set between the Toronto Blue Jays and the Boston Red Sox. For fans, the opportunity to see the World Series champion Red Sox for the first time this season in a heated American League East divisional matchup is reason enough to go.

For others, it's all about a six-inch polyresin figurine with a springy, oversized head.

It is the R.A. Dickey bobblehead giveaway, where the first 20,000 fans into Rogers Centre will receive a treasured collectible of the Toronto knuckleball pitcher, who is scheduled to start on the mound against the Red Sox.

And the two events nearly didn't coincide, for an unlikely reason that involved the biggest news story in the world.

Promotions are announced before the season begins. The Blue Jays like to receive their bobbleheads at least six weeks in advance. But Dickey's, travelling to Vancouver from China on a ship, was delayed after security in the area was increased following the disappearance of Malaysia Airlines Flight 370.

R.A. Dickey, the six-inch version, arrived at the Jays offices on Thursday, with only three days to spare.

Michelle Seniuk, the manager of promotions for the Blue Jays – and essentially the bobblehead chief – said there were "some tense moments" and fears the cargo wouldn't arrive in Toronto in time for the game, and the club made arrangements to fly it in from Vancouver at great expense, but a train got them here in time.

Since the 1960s, bobbleheads have become popular marketing vehicles and have been embraced by professional sports organizations such as Major League Baseball in an effort to attract more fans to games.

Even troubled Toronto Mayor Rob Ford has one that he is selling to help finance his re-election campaign.

The Blue Jays, who averaged 31,316 to their home games last season, also view the concept as one of their key marketing strategies to keep fans excited about coming to the ballpark.

"Bobbleheads are hugely popular with the fans, our most popular promotional vehicle," said Anthony Partipilo, the vice-president of marketing and merchandising for the Blue Jays.

And as for the players, you can forget all those Gold Glove and Cy Young awards that are distributed each season. To have thousands of miniature toys manufactured in your own likeness is seen as the ultimate perk.

"It's just a little caricature which is cool to have forever, a little doll made of yourself," said Toronto pitcher Brandon Morrow, who had a bobblehead made in his honour in 2012.

Partipilo said it is a lasting memento that illustrates "that you've reached a pinnacle in your career when there is a bobblehead figurine of yourself. That is like another plateau you hit. Players love it."

So do the fans, who will go to great lengths to secure the trinkets.

Partipilo said it is not uncommon for people who can't attend on the giveaway day to purchase four or five cheap seats in the 500-level and then send friends to pick up their bobblehead. The stand-ins will often leave before the first pitch.

Partipilo said such tactics are frowned upon.

The Blue Jays have three bobblehead giveaways this season, including Jose Reyes on June 8 and Mark Buehrle on Aug. 24.

Partipilo would not say how much it costs to manufacture 20,000 figurines, saying only it represents a substantial portion of the club's yearly marketing budget.

All Toronto's bobblehead days are scheduled for Sundays. Market research has shown that more people attend games on that day when a special promotion is attached.

In 2013, the Blue Jays averaged 36,765 for home games on Sundays. In the three bobblehead promotion days that figure jumped to an average of 44,894, a healthy increase of just over 22 per cent.

For what is a seemingly simple trinket, the process to bring a bobblehead to life is a complicated process. It begins in February during spring training when the Blue Jays will identify which players they will want to "bobbleize" for the coming season.

From there the club will send out dozens of photographs of the player to BDA Inc., a large U.S.-based merchandising company that a number of professional sports organizations have ties to.

From there, BDA sends the pictures over to a manufacturing plant in China where the task of making the bobbleheads begins in earnest.

It is not always a smooth process. Often the early bobblehead renditions returned in digital form to the Jays for inspection don't resemble the player at all.

That was the case with Morrow.

"Mine was like, generic Caucasian guy," Morrow said. "If you covered up the name across the bottom you would never guess it was me."

It is Seniuk's job to make sure the bobbleheads have more than a passing resemblance to the actual player.

She said it sometimes takes about 10 or 12 revisions, as was the case last season when the Blue Jays put out a Reyes figurine. She said that last season's Brett Lawrie bobblehead was the easiest, needing only six revisions.

"It never works the first time," she said. "We start with the digital picture they'll send back to us [to] suggest adjustments – make the nose bigger, the eyes smaller, change this, change that. The players would die laughing if they actually knew how I have to describe their faces.

"And people have no idea how much work goes into the making of these things. They're all hand-painted. They have people painting 20,000 pairs of eyes. It's crazy." 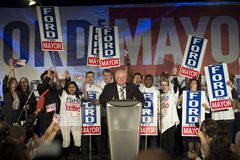 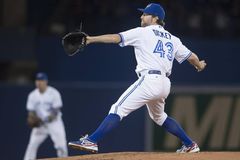