Tom Cheek called the first 4,306 regular-season Blue Jays games consecutively from April 7, 1977, to June 2, 2004, until leaving for two days off to attend the funeral of his father, also named Tom, a Navy fighter pilot in the Second World War.

For the YouTube generation and beyond, he's commemorated by his signature "touch-'em-all-Joe" call in the 1993 World Series. For legions more, Cheek will always be remembered as the voice of the Blue Jays, the deep and comforting baritone coming over the radio waves on summer evenings.

"When you hear Tom's voice, you don't say, who is that?" says Paul Beeston, president and chief executive officer of the Blue Jays. "You know it is Tom."

On Saturday, Cheek, who passed away in Oct., 2005, is to be honoured posthumously at the Baseball Hall of Fame in Cooperstown, N.Y., for contributions to the sport through broadcasting. His wife, Shirley Cheek, is to accept the Ford C. Frick Award and speak in her husband's place. Prior winners include Tony Kubek for his work with NBC and the Blue Jays, and Dave Van Horne, for his with the Montreal Expos and Miami Marlins.

Baseball fan Christopher Waddell, director of Carleton University's School of Journalism and Communication, says that while baseball broadcasters may have individual home-run calls and varying abilities to spin stories between pitches, their success is commonly defined by the relationship with the fans of the team. In a sport made for radio, for listening to a game while mowing the lawn, lounging on a dock or driving down the highway, Cheek become a familiar and reliable presence in the everyday lives of his listeners.

"When you hear Tom Cheek's voice, you know what it is – it's baseball to all the fans that follow the Blue Jays in Canada, and that's what defined him as a great broadcaster," says Buck Martinez, a former major-league catcher and now a Blue Jays television broadcaster. "He was so good for so long, he earned the right to stay in his position. For the Blue Jays and Telemedia, he was the best at what he did."

Shirley says the couple, who married in 1959, was down to "$5, maybe $10" when he left the Cambridge School of Broadcasting before he could graduate, to become a disc jockey in Plattsburgh, N.Y., which led to a position as sports director for stations in Burlington, Vt. The Montreal Expos, launched in 1969, allowed sports directors from network stations to participate in Wednesday home broadcasts for a while. Cheek would drive to Montreal, tape himself doing the play-by-play alone in a booth at Jarry Park, then do a critique of himself on the way home.

Meantime, in Toronto, media executive Len Bramson had formed a partnership with legendary broadcaster Foster Hewitt, who owned radio station CKFH (it became CJCL, and sold to Telemedia in 1981). Their company, Hewpex, won the radio rights for the expansion Blue Jays and Cheek was hired to become the play-by-play man. At the press conference to announce the hire, Shirley Cheek turned to Hewitt, told him about her school speech, and said, "My father if he were still alive, would be so ecstatic to know that I'd met you."

Bramson hired Early Wynn as a colour analyst. Wynn was a 300-game winner as a pitcher in 23 major-league seasons through 1963 and, as it happened, one of Cheek's boyhood heroes. They became an endearing team in spite of – or perhaps because of – Wynn's unique way with the English language. "Tom was knowledgeable about baseball, and Early could spin the stories," says long-time clubhouse manager Jeff Ross.

Cheek enjoyed the social aspect of baseball, the postgame dinners with team personnel such as manager Cito Gaston, the winter caravans, the events with affiliate stations, and especially the golf prior to games. Ross, an original employee of the team, would accompany Cheek on dinners and golf games: "He would always say to me, 'Ross, we're beating the system here, we're beating the system.'"

Martinez says Cheek earned the players' respect "because he never assumed it was something that just anybody could do."

He greatly admired players such as Paul Molitor, Robin Yount, Roberto Alomar and Derek Jeter who mastered fundamentals of the sport, who played the game the right way. "He took time to know the players," Martinez says. "He didn't want to be their friends, he just wanted to know what made them tick."

In the booth, Cheek's passion for his work prevailed over the occasional mistake or confusion about where the base runners might have wound up following that George Bell double. Howarth says that while Cheek guarded against homer-ism, his tone of voice betrayed whether the team was playing well or playing poorly, and that characteristic made for "a wonderful connection" between him and the audience.

Before Cheek attended his father's funeral, his colleagues in the radio booth had noticed an uncharacteristic ability to retain information. On his 65th birthday, June 13, 2004, he underwent surgery for a brain tumour and on October 9, 2005, that great big recognizable voice was gone.

Cheek encountered his veritable moment of fame in the 1993 World Series, and he nailed it.

Ninth inning, Game 6, Toronto trailing by a run with two runners on base, Mitch Williams on the mound for the Philadelphia Phillies, Joe Carter at the plate for the Blue Jays, the count two balls and two strikes. Williams threw a fastball, Carter drilled it over the left-field fence, and the crowd at the stadium then known as SkyDome erupted in delirium. As Carter jumped up and down on a celebratory romp around the basepaths, Cheek shouted out to him: "Touch 'em all, Joe! You'll never hit a bigger home run in your life."

"I've been listening to that call for 20 years," Beeston says. "I've heard it 1,000 times. It captures what we were at that point in time. It's spectacular. It brings back memories of Tom." 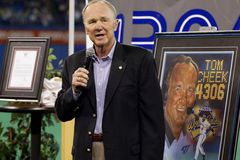 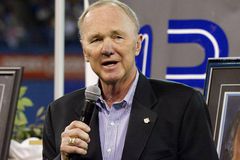 Cheek to return to broadcast booth
March 7, 2005
Cheek's turn for broadcasting award?
February 21, 2005
Follow us on Twitter @globe_sports Opens in a new window
Report an error Editorial code of conduct
Due to technical reasons, we have temporarily removed commenting from our articles. We hope to have this fixed soon. Thank you for your patience. If you are looking to give feedback on our new site, please send it along to feedback@globeandmail.com. If you want to write a letter to the editor, please forward to letters@globeandmail.com.
Comments