It'll never work, because it just can't, not any more – but evidently that isn't a reason not to try.

Not when you're a preternatural optimist like Warren Cromartie.

The former Montreal Expos outfielder and first baseman has a dream, and it's to bring baseball back to the city that gave him his big-league start in 1974.

Don't say it's impossible, that the game has moved on from a city it abandoned in 2004, it'll only encourage him.

There are compelling reasons, the 59-year-old believes, to think Major League Baseball can be enticed back into the largest untapped market in North America.

He ticks them off: a new revenue-sharing scheme to help the financial weaklings, a strong Canadian dollar, new revenue opportunities online, rising broadcast revenues in the United States, a vibrant local corporate sector and considerable, if somewhat latent, fan interest.

The context has changed, says Cromartie, who makes his living as a radio host in Florida but maintains close ties to Montreal and founded a group last summer to try to drum up interest in acquiring a team.

Now that group has launched a series of market surveys and feasibility studies – a process involving the Board of Trade of Metropolitan Montreal, business consultancy Ernst and Young, and BCF, a Montreal-based corporate law firm – to measure if it can happen.

The plan is for the studies, which will cost $400,000 – half from the board of trade, half from as-yet unidentified corporate donors – to be released this fall.

Asked how long it might take to bring a team to Montreal ("a five-tool city," as he called it), Cromartie shrugged, spread his hands and said, "I just can't say, not if we're being realistic."

This much is true: it's a massive, ambitious undertaking, one that Sylvain Vincent, Ernst and Young's managing partner for Eastern Canada, said is in the range of a billion dollars – including the cost of a new, purpose-built downtown ballpark.

It helps that he's enlisted the help of the board of trade's president, Michel Leblanc, and some of the same consultants who built the business case for a new publicly funded NHL-ready arena in Quebec City.

But baseball isn't hockey, not in Canada, and while Leblanc said it's an open question whether the endeavour can go ahead in the absence of public money, he added "our preference at this point is that it be a private project."

The Montreal Baseball Project has already consulted with architects to scout out possible locations for the downtown stadium the Expos never had – the Griffintown area, just southwest of the city centre, is the focus of the loudest rumours.

Whether Montreal's corporate sector, which wanted nothing to do with the Expos in the decade or so before they decamped for Washington, D.C., can be wooed successfully into underwriting the cost of a stadium and a team is also an open question.

There is also the conspicuous absence of a deep-pocketed owner-in-waiting.

Finally, there's the small matter of convincing MLB commissioner Bud Selig to return to a city the league couldn't bail out of quickly enough – as Leblanc diplomatically put it, the circumstances surrounding the Expos' final chapter were "troubling."

Cromartie said "we have lines of communication open with Major League Baseball," but ducked specific questions on whether he has spoken to Selig or his lieutenants about their interest in adding a second Canadian team.

Supporters of the project point out that the Expos had some great years, and that independent observers like the Conference Board of Canada have proclaimed the economic viability of baseball in Quebec's largest city.

Cromartie insists that "we have more believers than non-believers" and supporters are quick to point out MLB has eventually returned to every market it has ever left.

It's a hypothesis that will be severely tested in the coming months. 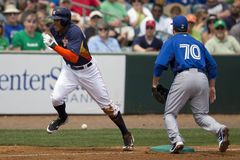 Youth is not wasted on the rebuilding Miami Marlins
March 7, 2013 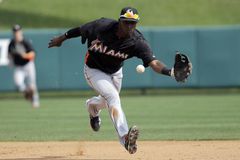