A sullen Jose Bautista sat at a table in the back of the Toronto Blue Jays clubhouse late Friday night, a beer clasped in his hand, mulling over the circumstances of a play he won't soon forget.

Bautista drained the bottle, grabbed a towel and then padded off to shower. It would be another 30 minutes or so before he could bring himself to face the media.

"Now I wish I would have thrown the ball home, obviously," Bautista said when he finally met with reporters. "God knows what would have happened if I would have done that, anyway.

"We could have played much better baseball, not only tonight but in the other games we lost also."

This is what losing felt like to the Blue Jays, and it was not sitting well.

With a gut-wrenching 4-3 setback to the opportunistic Kansas City Royals, the Blue Jays came within two wins of advancing into the World Series for the first time since 1993.

Instead, it will be the Royals who will be representing the American League for the second consecutive year in the Fall Classic against the New York Mets, the pennant winners from the National League.

The series will begin in K.C. on Tuesday night.

The Royals took out Toronto in the best-of-seven AL Championship Series four games to two in a playoff setback that the Blue Jays were having trouble trying to digest.

This was a group that believed they were a team of destiny and now they are heading home, empty-handed, to contemplate a playoff run filled with what-ifs, would-haves and should-haves.

"I don't think any of us were ready for it to end," first baseman Chris Colabello said. "Even down 2-0, 3-1, I don't there was ever a second we didn't think we weren't going to win the game.

"I know at some point there's only one team left standing, obviously. It's a great group. It's a shame it had to end."

All season long the Blue Jays competed with a supreme confidence in their own abilities, an arrogance that all championship-calibre teams possess.

Now it is over.

How the East was won

It was a feisty regular season for the Blue Jays, a mercurial journey that stretched the emotions of the fan base as the team churned to its first playoff appearance in 22 years.

The addition of catcher Russell Martin, the most expensive free-agent signing in franchise history, only added to the intrigue.

Then came the lows of spring training, when both Saunders and Marcus Stroman, who was being counted on to be a cornerstone of the rotation, suffered knee injuries.

Through the first half of the regular season, Toronto's offence was superb but the team had difficulty winning tight, low-scoring affairs. The Blue Jays were spinning their wheels, struggling to maintain a .500 record by the all-star break.

In an American League East division that was still ripe for the taking, Anthopoulos got bold at the trade deadline at the end of July, acquiring proven blue-chip all-stars in pitcher David Price and shortstop Troy Tulowitzki.

Outfielder Ben Revere, relievers Mark Lowe and LaTroy Hawkins were other pieces that were added.

The team took off after that, going 40-18 over the final two months of the season.

After trailing the first-placed New York Yankees by as many as eight games on July 28, Toronto – bolstered by an 11-game win streak – surged into first place for good on Aug. 23 and wound up winning the division by six games.

After falling behind the Texas Rangers 2-0 in the best-of-five AL Division Series, the Blue Jays roared back to win the next three games to advance against the Royals.

What's up next season

The Blue Jays will most certainly have a familiar look heading into next season.

Bautista and fellow slugger Edwin Encarnacion both have options that will probably be exercised by the club. Bautista is slated to earn $14-million and Encarnacion $10-million, which are both club-friendly terms.

Knuckleball pitcher R.A. Dickey is also slated to earn $12-million on a club option. Considering how difficult it is to add an arm that is almost guaranteed to chew up 200-plus innings, the betting is that Dickey will also be back.

Tulowitzki remains under control as does Donaldson and look for Colabello to be brought back to play first base.

Starting pitcher Mark Buehrle will probably head off into retirement, as will Hawkins. Free agent Dioner Navarro, who played the good soldier all season as the catching backup to Martin, will probably test the open market for a starting job with another team.

The Blue Jays will make a big push to resign free-agent starter Marco Estrada, whose solid performance in the postseason has undoubtedly earned him a raise.

Look for Estrada to be seeking at least a two-year deal in the $20-million to $22-million range The biggest decision will be with Price, the rental ace who was brought in at the trade deadline to help put the Blue Jays over the top.

The market will dictate that Price will command a long-term deal, probably in the seven-year range and in excess of $200-million, a sum that will likely see him playing elsewhere in 2016.

"They've got a very strong core," Price said, when asked to assess the Blue Jays future. "That's special. The feeling that we have in this clubhouse, every single day is, that's why you play the game, it's what you want to be a part of."

The turning point of Game 6

The play that led to the winning run on Friday night was not so much the result of a poor decision by Bautista as it was great hustle by Lorenzo Cain and heads-up coaching on behalf of the Royals.

It was just a good baseball play all the way around.

The score was knotted at 3-3 after Bautista swatted his second home run of the game, a two-run shot in the top of the eighth inning.

After a 45-minute rain delay, the Blue Jays sent rookie Roberto Osuna to the mound and he was shaky, issuing a leadoff walk to Cain, who has great speed.

Eric Hosmer, the next K.C. batter, then lashed a hit down the line in right field that sent Cain scampering around the base paths.

Bautista was on the ball quickly, his momentum causing him to spin all the way around before he threw the ball back into the infield.

It was at that moment that Mike Jirschele made the decision, from his vantage point as the Royals' third base coach, that won K.C. the game.

"This whole series, I've been watching Bautista on plays like that and he just comes up and throws it to second base," Jirschele recalled afterward.

So, with Cain already churning toward third as Bautista was gathering up the ball, Jirschele took a gamble and started waving his arms, signalling the K.C. base runner to round third and head for home.

"I was just hustling all the way, giving it all I had," Cain said. "I was definitely surprised when I saw Jirsch sending me, but we trust each other. Once I saw that, I just gave it all I had to score."

As Jirschele anticipated, Bautista winged the ball to second base where Tulowitzki was covering, wanting to hold Hosmer to a single.

By the time Tulowitzki realized what was happening, his throw home was too late to prevent the sliding Cain from scoring what would prove to be the winning run.

"It was a heads-up play by Lorenzo and by their third base coach as well," Donaldson observed. "They took advantage of a well-placed hit. Obviously that was the winning run."

"I thought I cut it off quick enough to where if I threw to second I'd prevent him [Hosmer] from going to second and Cain from scoring," a downcast Bautista said. "But obviously I was wrong.

And all Bautista could do was perch on his haunches down in right field in the aftermath of the play, wondering how it might have played out differently. 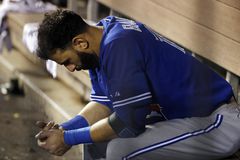 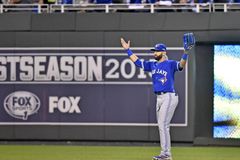 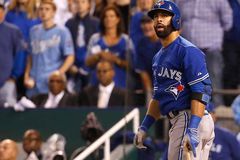