It was on a trip to Seattle when former Blue Jays ace Roy Halladay realized he was playing for something bigger than a city: He was representing an entire country.

The retired Toronto pitcher is among the 2017 Canadian Baseball Hall of Fame inductees, and reminisced about his time playing in Canada with affection.

"I had no idea that there were that many Blue Jays fans that far west," Halladay said. "It just baffled me. I figured it was just Toronto.

"I think the first taste of it I got was doing the winter caravan, and all the stops we made and seeing how many people showed up at all these different stops. But you'd go to Seattle and see that many people there, it definitely was something you absolutely did realize as a player … you felt like you were representing Canada.

Halladay was an eight-time all-star whose .661 winning percentage is the best in Jays history. He also ranks second among Jays pitchers in wins (148), shutouts (15) and strikeouts (1,495).

The Denver native calls Toronto his "home away from home." His 16-year-old son was born in the city. One favourite memory is the reception he received at Rogers Centre when he returned as a visiting player with Philadelphia.

"It just really meant a lot to me," Halladay said. "I always considered it home there, so to get that reaction was phenomenal."

He cheered from afar during the Blue Jays' playoff runs the past two seasons, saying with a laugh, "I am so jealous, you have no idea. It's absolutely awesome."

Halladay, who coaches his two sons, is planning a return to baseball and said he will definitely be working with a team – perhaps Toronto – by the time spring training opens.

"I don't know what team it will be with, or in what capacity, although I can say I have talked to the Blue Jays," Halladay said. "But I really do want to get back into baseball, and I really enjoy working with younger players, younger pitchers, the development of pitchers … that kind of whole area is something that really entices me."

Guerrero, meanwhile, speaking through an interpreter from the Dominican Republic, said: "I was surprised and excited to hear that I'm being inducted.

"I knew I would need to wait at least one more year to join the National Baseball Hall of Fame in Cooperstown, but I'm very pleased to join the Canadian Hall of Fame first, since I was given my first opportunity to play Major League Baseball in Canada."

Carter was the president of Baseball Canada for from 2000 to 2016, the longest-serving president in the organization's history. During Carter's reign, the men's and women's national teams captured 13 international medals, including gold medals at the Pan American Games in 2011 and 2015. He called the gold-medal game at the 2015 Pan Ams in Toronto one of the highlights of his tenure.

"I was fortunate enough to be sitting directly behind home plate, and when we won, I thought they were my boys, my sons," Carter said. "I felt so proud to be part of that."

The late Hudlin, a native of Victoria, served as an umpire in his home province for more than 40 years. He was the first non-American umpire to work the Little League World Series in Williamsport, Pa., in 1967. Seven years later, he returned to umpire the event, making him the first international umpire ever to work two Little League World Series. He died in 2014 at the age of 91.

Managed by Ernie Whitt, Canada won its second straight Pan Am Games gold with a thrilling, extra-inning win over the United States on July 19, 2015. Whitt said he's never watched the video of his team's Pan Am victory.

"That just lives in my memory," Whitt said. "Every major win that we've had with the team is etched in stone in my memory, and it's something that I don't know whether video would even give it any justice. I like it just the way it is now, in my mind."

The induction ceremony is set for June 24 in St. Marys.

Aaron Sanchez to appear on Canadian cover of MLB The Show 17
January 26, 2017 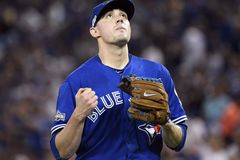 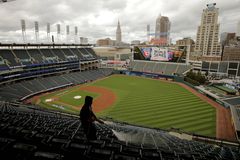