The dream started at age 12 for Adeiny Hechavarria, when he first watched a pirated recording of a major-league baseball game.

Inspired, he'd occasionally sneak into one of the resort hotels near his home in Santiago De Cuba, trying to catch some live action amid the rich tourists sitting at the bar.

He was awed by the majestic fields, crisp uniforms and large crowds. He decided that he too one day would play in the big-leagues.

But fulfilling that dream, highly unlikely for North and Latin American children, is nearly impossible for a kid from Cuba.

Even if someone possesses the raw talent and the drive needed to reach the majors, few are ever able to leave their family and friends behind on the island.

Hechavarria, a shortstop prospect who signed with the Toronto Blue Jays for US$10 million over four years last spring, is among the handful of baseball players to make it out.

And despite a daunting series of challenges since arriving in the United States last year, and the pain of being away from his family, the 21-year-old hasn't had a moment of regret.

"I'm proud of what I did," Hechavarria says of his decision to defect during an interview interpreted by Blue Jays coach Luis Rivera.

"It's my dream to be a baseball player."

Few in professional baseball have had to go through as much in order to chase their dream.

Hechavarria had long flirted with the idea of one day trying to escape Cuba, but he became convinced it was the right thing to do when as a 17-year-old he played in a Pan American tournament in Mexico.

He was stunned by the difference in quality of life between Mexicans and Cubans, and the idea of defecting took hold. At home, he talked things over with his father, Diosmede, who urged him not to take the risk.

It didn't matter - Hechavarria's mind was made up.

Turning that decision into reality, however, was a much more complicated and clandestine process.

For Cuban baseball players, Hechavarria explains, finding someone to trust is extremely difficult. Undercover government agents are everywhere, he says, offering ways off the island to test a person's loyalty.

Often, people trying to get off the island are caught well before they even reach the ocean, or if they do make it onto the boat, before they reach international waters.

"There are undercover people that ask you to do that just to see if you want to leave, and if you say yes, then they put you under arrest," says Hechavarria. "I had to be very careful to know who to trust. I figured out who was the right guy by looking around and asking questions. And I decided it was time for me to leave.

"I was lucky I only had to do it once. A lot of people have to try it more than once."

The plan for Hechavarria was to get on a boat bound for Mexico and figure things out from there. But he couldn't be seen making his way from Santiago De Cuba - a city at the southeastern end of the island, nearly 900 kilometres from Havana - to the shore alone through the backwoods.

Sometimes simple bystanders can be paid informants, he says, and if he was recognized, his plan would have fallen apart.

Carefully, he found his way to a boat with a capacity for about 30 people. He and 11 others made the trip through choppy waters to Mexico.

"I'm not afraid of the water because I grew up near the water, but when I was in the middle of the ocean and there was only water, that's when I was really scared," he says. "For the first few days in Mexico I felt terrible, I felt like I was lost.

"I was in the middle of nowhere and I didn't know what to do."

Once ashore, Hechavarria says vaguely that he was recognized by someone he didn't know, and that person helped get him set up with residency. Eventually he connected with agent Bart Hernandez, who brought him to the Dominican Republic for some workouts.

Hernandez also tipped off Marco Paddy, the Blue Jays' director of Latin American operations. The two had earlier forged a relationship while Paddy was with the Braves and serving as a mentor for another Cuban shortstop, Yunel Escobar, also a Hernandez client and now with the Blue Jays.

Paddy had seen Hechavarria play for Cuba and proceeded to watch the shortstop work out several times in the Dominican, had dinner with him and Hernandez, and then phoned assistant GM Tony LaCava.

"The kid was looking pretty good," Paddy recalls. "I told Tony this is a guy we need to make a run at."

LaCava, GM Alex Anthopoulos, special assistant to the GM Dana Brown, pro scouting director Perry Minasian and amateur scouting director Andrew Tinnish were all in attendance as Hechavarria held a private workout at the team's academy in the Dominican. He sold them there on his worth.

Hechavarria returned to Mexico to await the bidding process and the paperwork to get an American visa, and was officially signed April 13.

That's when the process of acclimating to life in North America started, and Hechavarria is still getting used to things.

"Everything is different than it is in Cuba, but the most difficult thing so far has been the English barrier," he says. "I'm taking English classes and I'm going to try and do the best to get the most out of those classes so I don't have to worry about the English barrier."

Playing baseball has been the easiest part for him, although he didn't start well.

Hechavarria opened the 2010 season at single-A Dunedin but batted just .193 in 41 games while making nine errors in the field. The Blue Jays promoted him to double-A New Hampshire anyhow on June 28, and under the mentorship of Rivera, the Fisher Cats manager at the time, he started to blossom.

In 61 games he batted .273 while making 11 errors, but helped along through his relationship with Rivera, he also began to adjust to his new life.

"I would always bring him into my office just so he could free the thoughts in his mind about his problems and his worries, non-baseball stuff," says Rivera, who served as a father-figure to Hechavarria. "He was very close to his family, it was really hard for him knowing he had nobody here.

"Try to put yourself in that situation, you go to another country and nobody is waiting for you, you have nobody to talk to. It's going to be a hard situation. We just tried to make him feel comfortable."

Times are better on that front for Hechavarria, who was joined in the United States by his father three months ago. He hopes that he can soon bring mother Mirta and older brother Alien to join them at his home in Plantation, Fla.

"That's my wish," he says. "I know it's going to be hard, but hopefully one day I can do that. If I can bring them here, I will feel like I have everything I need from Cuba."

The sacrifices, he says, have all been worth it. On the field in his first big-league spring training, Hechavarria is turning heads with his fluid motion, smooth swing and quickness.

It's easy to see why Rivera says "there's no way he's not going to get to the big-leagues. He's a baseball player, man."

The Blue Jays aren't sure whether he'll start the season at double-A or triple-A, but Hechavarria's goals for 2011 are clear. His focus is on smoothing out the rough edges around his game, and seeking out a shot at the big-leagues this year.

After all, reaching the majors is why he risked his life and left his old life behind. 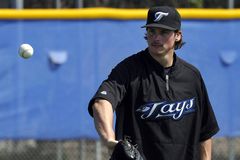