Old reliable behind the plate

Once again, this will be the primary domain of Russell Martin, one of the busiest catchers since breaking into the majors in 2006. Martin has caught in 1,365 regular-season games, second only to Yadier Molina's 1,419. That represents more than 11,000 innings at baseball's most demanding position and, at age 34, you have to wonder when that taxing workload will start to exact a toll on Martin's productivity. Bothered most of last year with a sore left knee that required off-season surgery, Martin still stroked 20 home runs, tying him for the fifth highest mark among catchers. But his .231 batting average was his lowest in five seasons and Martin was obviously wearing down by the end of the year, hitting just .161 with only five extra-base hits over his final 27 games. Still, Martin's signal calling remains impeccable and his contribution to a starting staff that was arguably baseball's best in 2016 cannot be underestimated. This season, Martin will have veteran Jarrod Saltalamacchia as his backup, with a career batting average of .234 and a switch-hitter to boot.

A bag of contention

A potential sore spot for the Blue Jays would be first base following the messy departure of fan favourite Edwin Encarnacion to the Cleveland Indians. Encarnacion, who had 42 home runs last year when he split the duties with Justin Smoak, will be missed. As for Smoak, the the switch-hitter had a dismal season at the plate, batting just .217 with 112 strikeouts. His 2.7 at-bat-to-strikeout ratio was the second-worst mark in the majors among players who played in at least 120 games. But all that didn't stop Blue Jays General Manager Ross Atkins from proclaiming early in spring training that he thought Toronto's best lineup this season featured Smoak, who is solid defensively, as the regular first baseman. Smoak responded with just 11 hits and 17 strikeouts through his first 19 games of spring training, a rather unsavoury .224 average that doesn't exactly inspire optimism. In July of last year, Smoak signed a two-year contract extension for $8.25-million (U.S.) with an option for the 2019 season. But if he gets off to a slow start look for the Blue Jays to move quickly to Plan B with newcomer Steve Pearce seeing regular duty at first.

Travis aiming to be a healthy choice at second

There is no doubt Devon Travis can hit, with a .301 batting average and 19 home runs in the two seasons he has been a Blue Jay. And he provides Toronto with its best option leading off, which was a rather unsettled area a year ago where even Jose Bautista hit at the top of the order on 40 occasions, not exactly the spot you want to see one of your best power/RBI weapons. "I think if he [Travis] stays healthy, he's got a chance to be one of the better hitters in baseball," Toronto manager John Gibbons said. But staying healthy, that's been the rub for the 26-year-old since he arrived in Toronto for the start of the 2015 season. Injuries have caused Travis to miss just over 50 per cent of Toronto's regular-season games the past two years and a stubborn knee issue has slowed his work during spring training. Although he has played in only four Grapefruit League games and collected seven hits – four for extra bases – in 13 at-bats, all signs are that come Monday in Baltimore Travis will be in the starting lineup, playing second and batting leadoff. Depending on the final makeup of the 25-man roster, should Travis stumble early the Blue Jays have solid defensive backups with either Ryan Goins or Darwin Barney.

Josh Donaldson at third base, Troy Tulowitzki at short and Jose Bautista in right field. If all three can remain healthy there is no reason to assume this trio cannot continue to display their prodigious skills. The Blue Jays will need continued high-octane outputs from all three, offensively and defensively, if they hope to contend. Donaldson is one of only three players in the game the past two years (Colorado's Nolan Arenado and Boston's David Ortiz are the others) to hit at least 75 home runs, bat .290 or better and score at least 220 runs. The stoic professionalism of Tulowitzki will continue to have a positive effect in the clubhouse and he remains one the of the game's top defenders. And Bautista, with his well-publicized off-season free-agent exploits, will be playing with a rather large chip on his shoulder that could motivate him to bounce back from a lacklustre, injury-marred 2016.

A dicey proposition in left

The outfield will have a familiar look, starting with Kevin Pillar in centre, ready to add to his already bulging highlight-reel collection of daring catches. And Bautista, who played for the Dominican Republic in the World Baseball Classic, will again be in right. That leaves left field as another conundrum for the Blue Jays. It would appear that free-agent newcomer Steve Pearce has the regular job locked up, which is a bit of a stretch considering the 33-year-old has never been an everyday player over his 10-year career. Even during his best season – 2014 with Baltimore when he batted .293 and hit a career-best 21 home runs – Pearce was a positional nomad, getting 47 starts at first, 27 in left and another four in right. Further complicating matters is that Pearce is coming off surgery to his right (throwing) elbow and the Blue Jays pampered him. Last Saturday was his first game of the spring lining up in left. Melvin Upton Jr. and Ezequiel Carrera are in the running as the fourth utility outfielder and it is doubtful that there is room for both on the 25-man roster.

The starting pitching, arguably the best in the AL last year if not all the majors, remains the team's strength. And it has a chance to be even better in 2017. All the key hurlers who finished with the team last season are returning, led by lefty 20-game winner J.A. Happ. Toronto's starters posted an AL-best 3.64 earned-run average last season, almost half a run better than the staff of the Cleveland Indians, who won the pennant. Toronto's starters led all of the majors in total innings pitched with 995 1/3 and stymied opposing hitters with an AL-low batting average of .236. Marcus Stroman, fresh off a masterful starting performance for the United States in its championship victory over Puerto Rico in the World Baseball Classic, appears poised to deliver consistently for Toronto. Aaron Sanchez, whose 2016 workload was closely monitored, posted the lowest starter's ERA (3.00) in the AL. His .882 win percentage (15-2) was baseball's best among qualified pitchers. Marco Estrada, who made the all-star team but could not play because of a bad back that bothered him all year, reports that he is still dealing with sporadic back pain but is in a much better spot than a year ago. And Toronto is perhaps most excited about the prospects of Francisco Liriano, the other lefty in the starting rotation who was a trade deadline addition to the team last season. Liriano has been lights-out during the spring, posting a 1.88 ERA with 25 strikeouts during 14 1/3 innings.

The Blue Jays bullpen has undergone a bit of an overhaul but will still feature Roberto Osuna at the back end. Still only 22, Osuna has emerged as one of the game's top young closers, posting 56 saves over two years. Last season Osuna garnered 36 saves in 42 save opportunities. Some concern has been expressed this spring about a bit of a drop in the velocity of his fastball, which usually ranges in the mid-to-upper 90 miles an hour. But the Blue Jays say they aren't concerned, that it is still early. Veteran Jason Grilli and the free-spirited Joe Biagini will both return and will be primarily the eighth-inning setup hurlers. Although the final makeup of the seven-man bullpen will not be made final until Toronto concludes its exhibition schedule this weekend in Montreal against Pittsburgh, it will contain at least two newcomers in J.P. Howell and Joe Smith, a couple of MLB veteran free-agent signings. Howell, 33, is a lefty who is the defacto replacement for Brett Cecil, who signed this off-season with the St. Louis Cardinals. 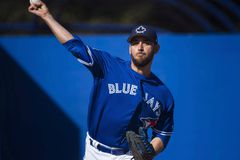 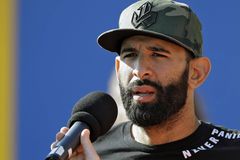 Montreal baseball investors have met MLB’s conditions: source
March 29, 2017
Follow us on Twitter @globeandmail Opens in a new window
Report an error Editorial code of conduct
Due to technical reasons, we have temporarily removed commenting from our articles. We hope to have this fixed soon. Thank you for your patience. If you are looking to give feedback on our new site, please send it along to feedback@globeandmail.com. If you want to write a letter to the editor, please forward to letters@globeandmail.com.
Comments