Kevin Pillar didn't like the way his body was moving through workouts when he first reported to the Toronto Blue Jays camp last month.

So he changed his whole routine with one goal in mind — be more like a baby.

"It kind of sounds weird unless you see it happen, but my focus is really to try to move like an infant child," the Toronto centre-fielder said before Wednesday morning workouts at Florida Auto Exchange Stadium.

"They do a lot of things right: they know how to properly roll over, they don't allow their big muscles to dominate their bodies."

Pillar's new routine, which emphasizes flexibility and mobility through rolling and stretching, is aimed at targeting the body's smaller muscles. The results are already beginning to show.

"The big thing I've noticed is I wake up in the morning and I feel better," he said. "I'm not as sore as I used to be."

Pillar, who played 159 games last season, estimated he felt "below average" physically for about half of them.

Part of that had to do with the way he plays in the outfield — with reckless abandon. He runs at top speed to track balls, dives through the air to catch them and lands hard on the artificial turf-covered concrete of the Rogers Centre.

The highlight-reel catches that punctuated Pillar's 2015 season may not be as prevalent this year.

"With improved mobility and quickness hopefully I don't have to dive as much," he said. "But when I do dive, hopefully I'll be able to bounce back quicker than I did last year.

"It'll be easier to get up from. I'll be less sore, I'll recover a little bit quicker. Those are my main focuses."

While position players don't have to officially report until Thursday, Pillar has been here since Jan. 20 — three days after purchasing and moving into his first home with his wife, Amanda, in Thousand Oaks, Calif.

Pillar, second baseman Ryan Goins and first baseman Chris Colabello have all been working out together at the Jays facility along with all-star slugger Jose Bautista.

"The off-season is fun to get away but after a while you miss that camaraderie," Pillar said. "We really just want to build on what we started last year. It's fun to see your friends and family at home and get away from the game but you miss that aspect of competition and brotherhood and friendship.

"For guys like me, Goins and Colabello, last season was really our first full season and we just want to push each other to be better this year."

Pillar, who had to battle for a starting outfield job last spring, finished the season with a .278 batting average, 12 home runs and 56 RBIs. But he cemented himself as the team's centre-fielder with his strong defence.

Now that he's virtually assured a spot on the big-league roster, Pillar's focus has changed.

"As much as I want to say it won't change, I think it does a little bit," he said. "I've never been in a position where I've had job security so I don't like to look at it like that. But at the same time I understand where I stand with the team now.

"I'm still going to go out and compete but in the back of my mind I understand that I'm playing for something bigger than a job. I'm playing for the whole regular season and to help the team win."

Toronto manager John Gibbons believes Pillar can only get better with a full major-league season under his belt.

"Kevin came into his own last year, did a tremendous job," Gibbons said. "The year before he was up and down a little bit, trying to establish himself and last year he did it. 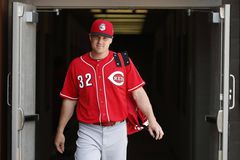 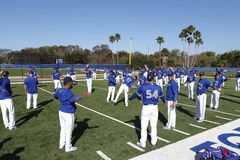 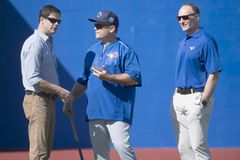