Once Mark Shapiro was lured from the Cleveland Indians to take up the position as president and chief executive officer of the Toronto Blue Jays over the summer, it seemed just a matter of time before some of his old Cleveland colleagues followed.

The anticipated front-office purge started Thursday night when the American League club confirmed that Ross Atkins, who this past season was the Indians' vice-president of player personnel, is the next general manager of the Blue Jays.

Atkins will formally be introduced at a media conference on Friday morning at Rogers Centre in Toronto.

Atkins, 42, replaces Alex Anthopoulos, the Montreal-born former GM who resigned abruptly after constructing the team that made a stirring run to the AL Championship Series this past season before falling in six games to the Kansas City Royals.

After Anthopoulos rebuffed the Blue Jays' efforts to sign him to a long-term deal to work under Shapiro, Tony LaCava, a long-term Blue Jays front office executive, was promoted to interim GM by the new CEO.

It is believed that LaCava and Atkins were the only two serious candidates for the job, although it was reported that Toronto also interviewed Rene Francisco, the Royals assistant general manager of major-league and international relations, about the position.

LaCava, whom Shapiro signed to a contract extension after the conclusion of the 2015 season, will remain with the organization.

LaCava's new title, which is being described by the team as a promotion, is senior vice-president of baseball operations (which was one of Anthopoulos's former designations) and assistant GM.

With Major League Baseball's winter meetings slated for next week in Nashville, it only made sense that Shapiro would want to have his new GM by his side at the annual meet-and-greet affair, where clubs gather to discuss league business and conduct off-season transactions.

Including LaCava, Atkins will become the seventh GM in Blue Jays history.

Atkins is hardly a big name outside Cleveland, where he has spent his entire professional career with the Indians' organization after being selected in the 38th round of the 1995 draft as a right-handed pitcher.

A native of Greensboro, N.C., Atkins never played a day at the major-league level and joined Cleveland's player-development department in 2000. He has spent the past 15 years honing his executive skills in that area.

From 2004 to 2006, Atkins was the club's director of Latin American operations, after which he was the director of player development for three years.

From 2011 to 2014, he served as Cleveland's VP of player development before being promoted last year to VP of player personnel.

Anthopoulos has never publicly stated his reasons for wanting to leave the Blue Jays after their most successful season in 22 years, other than saying he felt it was the right time.

It is believed that Anthopoulos left after it became clear that he would not have the autonomy running the baseball team under Shapiro that he had with Paul Beeston, the club's outgoing president and CEO, who tended to be the business conduit between Anthopoulos and owner Rogers Communications.

Shapiro has made it clear that he intends to have a hand in the product on the field, so it will be interesting to see how the dynamic with Atkins plays out.

Certainly Atkins is joining a team that, despite a hugely successfully 2015 campaign, has a lot of holes – none more pressing than trying to fill the void left by the departure of lefty ace David Price, who earlier this week signed a seven-year, $217-million (U.S.) free-agent contract to play for the Boston Red Sox.

It is believed that the Blue Jays were never really a serious bidder for Price, not willing to tie up that kind of money on one player. But Price's departure has left many wondering about Toronto's commitment to repeating as AL East champions in 2016.

While LaCava was handling the interim reins as Toronto's GM, the Blue Jays re-signed pitcher Marco Estrada to a $26-million, two-year deal; traded reliever Liam Hendriks to the Oakland Athletics for starter Jesse Chavez; and then signed free-agent starter J.A. Happ to a $36-million, three-year deal.

While the starting pitching remains suspect, Atkins will also have to concern himself with the catcher's position now that the Blue Jays decided to non-tender Josh Thole for 2016, making him a free agent.

With Dioner Navarro, last year's backup to Russell Martin, reportedly having agreed to a new free-agent deal with the Chicago White Sox, the Blue Jays are suddenly very thin in talent behind the plate.

A look back at some of the top pitchers who left the Toronto Blue Jays
December 3, 2015 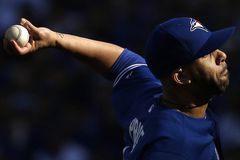 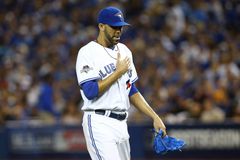 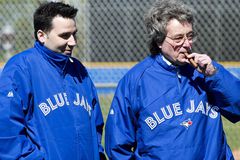