A renewed lease for the Toronto Argonauts to play at Rogers Centre will effectively serve as notice to vacate, clearing the way for grass to be installed for baseball no later than 2018.

The Toronto Blue Jays have determined it is possible to grow and maintain a grass playing surface inside the facility by digging up the floor, adding a drainage system and topping it with about 30 centimetres of dirt.

"They can't do it with the Argos there, and more to the point, the Argos can't play there if they have grass," he said.

It would be especially complicated to maintain natural turf in the indoor stadium, despite its retractable roof, with football cleats chewing it up. So, with the CFL schedule intersecting baseball seasons by up to four months, there will be no room for the Argos at the inn.

Opened in 1989, at a cost to taxpayers of nearly $600-million, Rogers Centre (then-called SkyDome) was the latest and greatest of the multipurpose genre, a brand since made extinct. Today, it stands as one of the oldest stadiums to house Major League Baseball, and one of only two with artificial turf (along with Tropicana Field in St. Petersburg, home of the Tampa Bay Rays).

Rogers Centre and the Blue Jays are owned by Rogers Media (a subsidiary of Rogers Communications Inc.). The Argos are owned by Canadian Senator David Braley (who also owns the CFL's B.C. Lions).

Appearing on a radio show in March, Blue Jays CEO Paul Beeston said the parent company had given the team the green light to investigate re-engineering the stadium to accommodate a grass field. "It's definitely going to happen. The only question is whether it's 2016, '17 or '18."

The lease renewal for the CFL team, which has played at Rogers Centre since 1989, is expected to include a clause that would allow the Argos to exit early, perhaps as soon as the 2015 season. The team's last deal expired after the 2012 season, capped by the Argos' Grey Cup win at Rogers Centre last November.

Beeston declined comment, as he was continuing to negotiate with Rudge.

With the Argos on the verge of being given notice, and with the baseball team having determined grass can thrive, it leaves the question of whether ownership is prepared to undertake the capital cost.

While a firm decision hasn't been made on grass, Rogers Media president Keith Pelley said, the company does not intend to build a new baseball stadium.

"Rogers Centre is in the perfect [downtown] location and is a terrific stadium," he said in an e-mail. "We will continue to make improvements to make it better for our fans."

Installing a grass baseball field at Rogers Centre would be problematic but not impossible, experts said.

"Nothing's impossible. Everything can be engineered … but it's not as simple as trucking in dirt and laying sod down," said Steve Schiedel, vice-president of Greenhorizons Group of Farms Ltd., a Cambridge, Ont.-based company that installed a temporary grass field in Rogers Centre during the summer of 2010, for a pair of soccer matches.

Because Rogers Centre is surrounded symmetrically by high walls to support the retractable roof, special lighting may be required to stimulate grass growth. But the biggest hurdle is lack of drainage.

Beeston has emphasized consistently that, as a Canadian and a CFL fan, he had no intention of orphaning the Argos. At the same time, he wanted to ensure the football club would be pursuing other options aggressively.

So, grass field or not, the Argos are on the clock.

The CFL club is taking a look at sharing outdoor BMO Field with Maple Leaf Sports and Entertainment Ltd.-owned Toronto FC of Major Soccer League in order to provide fans with a more intimate atmosphere, but significant renovations to the facility would be required for football.

A decade ago, discussions took place between the Argos and University of Toronto to move into downtown Varsity Stadium. Situated on the subway line, Varsity could have been renovated to accommodate the CFL (as McGill University's Percival Molson Memorial Stadium was for the Montreal Alouettes). Instead, U of T tore down most of the building to favour track and field.

"Tragic," said Rudge, who wasn't involved with the Argos at the time. "It would have been a jewel in the middle of the city. But you can't look back."

Rudge said BMO Field is currently the practical choice, being located 3 kilometres west of Rogers Centre on land once occupied by Exhibition Stadium (former home of the Argos and Blue Jays).

Rudge, admitting the CFL team operates in the red, said the Argos could become profitable by adding 5,000 to 9,000 seats at BMO (capacity: 20,195) while creating operational synergies with MLSE in ticketing and other departments.

There's also talk of MLSE buying the club from Braley.

Tim Leiweke, CEO of MLSE, said in a conference call last week that renovation of BMO is being considered to accommodate football.

"The commitment we're going to make [to TFC fans] is, we will not ruin the intimacy of the viewing and the current setup for MLS," he told reporters. "And we will do it in a way where we're not going to turn the field into dirt."

Blue Jays shut down Jose Bautista for the season
September 4, 2013 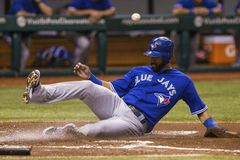 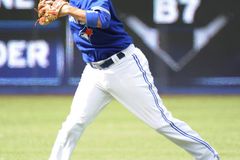 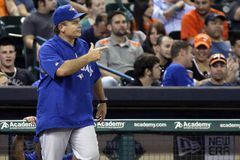 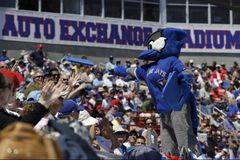