Toronto slugger Jose Bautista would like to be a Blue Jay for life. It appears to be up to the team's new front office to make the next move.

Bautista, who is entering the final year of his contract, is coming off one of his best seasons and helped the Blue Jays end their long playoff drought last year. He made it clear in a phone interview Thursday that he would like to finish his career with Toronto.

"It would be an honour if I had the opportunity to do so," Bautista said from Tampa.

Now the question is when – or if – general manager Ross Atkins and/or team president Mark Shapiro will be willing to spend the big dollars needed to get him signed to another multiyear extension.

"I have to have something to consider at some point if I'm going to make that decision, which hasn't happened yet," Bautista said. "So I'm going to continue to go about my business just like any other year and any other day because I don't really have a decision to make right now."

Bautista, who has been a top power hitter for several years, posted big numbers again last season with 40 homers and 114 RBIs. Teammate Edwin Encarnacion, who hit 39 homers and had 111 RBIs, is also entering the final year of his deal and their long-term status will be a key talking point with spring training set to begin this month.

Bautista said he recently had a positive meeting with Atkins and Shapiro at his Florida home.

"I think it [went] well," he said. "They've spoken about how they want to get to know us, at least referring to myself and Edwin. They've been the ones vocal about the fact that they're considering extending us, which would be an honour for us if we get considered.

"They felt like they had the need to get to know us a little bit and I feel the same way. They're new to the team, I don't really know them personally or their style of management per se other than what I've seen or heard in the press from their previous jobs, which was to be conservative because you're in a small-market type of thing.

Atkins and Shapiro both previously worked in the Cleveland Indians' front office. At a recent media availability in Vancouver, Atkins described the meeting with Bautista as "a great interaction."

Bautista enjoyed a breakout season in 2010 when he hit 54 homers and drove in 124 runs. The Blue Jays rewarded him the following off-season with a five-year contract worth a guaranteed $65-million (all currency U.S.) and his 2016 option was picked up at $14-million.

The team will likely have to pony up much more than that to keep him for 2017 and beyond. Given the big-dollar free agent deals that were completed this off-season, a top-flight talent such as Bautista would likely command an annual salary somewhere in the neighbourhood of $25-million.

Bautista added that his agent has not given the team any kind of deadline.

At a meeting with the Toronto chapter of the Baseball Writers' Association of America last December, Shapiro was asked whether contract extensions would be a top priority in the off-season.

"As I've said before, at some point they'll be a priority," he said. "We still have arbitration to deal with and roster construction, at some point, that will be a discussion."

Bautista powered the Blue Jays to victory with a key homer – complete with epic bat flip – in the decisive fifth game of Toronto's first-round playoff series win over the Texas Rangers. The Blue Jays went on to lose the American League Championship Series to the Kansas City Royals.

"Fans-wise, city-wise, having the country behind us and every other aspect of being a Toronto Blue Jay player is something that I love," Bautista said. "Now hopefully that matches up with the new front office desire to win now, kind of like myself.

"So we'll see. Only time will tell if that's going to be synchronized."

Bautista, who made his big-league debut in 2004, played 142 games with Pittsburgh in 2007 and was dealt to the Blue Jays the following year.

"I'd be a fool not to consider being extended by the franchise that gave me a second chance to be an everyday player in the big leagues and then experience a ton of success," he said.

The right-fielder is still very much in his prime at 35 and feels he can play at a high level for several years to come.

"I have to go by how I feel, and I feel great," Bautista said. "I feel like I could play for another 10 [years]. Whether that's realistic or not, again time will tell. But I have no set number of years that I would like to play moving forward.

"I'll play until they tell me that I can't or they kick me out or they just send me home."

The Blue Jays were eliminated in six games by the Royals, who went on to win the World Series. It was Toronto's first playoff appearance since winning a second straight World Series in 1993.

If Bautista tested the market in the next off-season, he would be a headliner in what is expected to be a weak crop of free-agent outfielders.

Bautista will return to Toronto next week to serve as a coach at the NBA all-star celebrity game on Feb. 12 at Ricoh Coliseum. The NBA all-star game is set for Feb. 14 at Air Canada Centre. 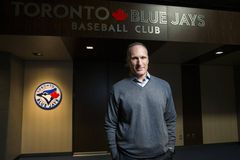 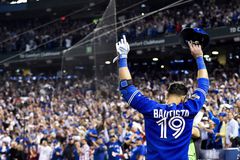