Ahead of Thursday night's rained-out opener with the New York Yankees, reliever Brett Cecil was doing his best to be invisible in the locker room.

That always works the other way round.

"Brett, could I talk to you for a minute?"

"About your good run of form."

Cecil hasn't allowed a run since June 21 – back when the Blue Jays were another ball club, rather than a panting, national thing.

Generally speaking, players like being stroked about a nice stretch of play. Not on this team, and not any more.

"I don't really want to talk about that," Cecil said, taking an awful long time to tie a single shoe.

"Are you afraid of cursing it?"

Cecil turned his head just enough so that you could see his eyes, but not so far that he was actually looking at you: "You're cursing it right now."

Bad news: I'm on the voodoo hook until he appears again.

Thursday's opener with the Yankees was called 90 minutes before first pitch.

On cue, rain began to pelt the Bronx as they made the announcement. They'll play a doubleheader on Saturday to make up the game.

Nothing changes in the Toronto pitching order. David Price gets an extra day, and will now start Friday. Marco Estrada and Marcus Stroman will share Saturday's duties.

Since the Jays are off Monday, while the Yankees have to wait a week to sort things out, a very small advantage may accrue to Toronto.

That's where we're at now – at a place where fractional benefits suddenly seem important. We're into squeaky bum time, from now until whatever this is going to be ends.

Unused to this situation, the Jays are doing their best to make each day as average as the next.

On Thursday afternoon, the locker room was devoid of humanity – as usual.

Price had his handwritten "If you don't like it, PITCH BETTER" stickie up in his locker – as usual.

Stroman and Kevin Pillar were lying on a couch, heads nearly touching, reading something on Pillar's phone and giggling – I'm not sure if that's usual, but it is cute.

When you have the benefit of dropping in and out of a clubhouse, you spend the first few minutes each time thinking, "What's changed?" Aside from a few new faces, the answer with the Jays is still "Nothing." You don't feel a sudden rise in temperature or the nervous tension that sometimes creeps into a club on the brink. Appearing defeated off the field of play is the last stage of attaining that state on it. It's always preceded by hysterical shows of bravado.

The Jays didn't look very good while dropping two of three in Boston, but none of that stink appears to have trailed them to New York. No one felt the need to wash his hands of the series, which is a good thing. Because they know that we know that they know that denying a thing is as good as confirming it.

We're about to get very deep into just-keep-it-together time, so here's the exception that proves that rule. Starter Mark Buehrle commence'd aux festivals on Wednesday when he insisted that, despite all those stories you've been reading, he is most definitely not angry at Stroman for taking his start on Saturday. Definitely not. Not happening. Loves the guy. Not heads-touching-on-the-couch sort of love. But close. They text.

(Since he is old, Buehrle believes the magic of texting is the new glue that binds people together. Sort of what the church used to be.)

Since no one had written/thought/hallucinated that Buehrle might resent Stroman, it came off as a bit odd. But it takes veteran savvy to give your team speech via misdirectional scrum interview – "No leaks. Or I will be forced to text you." Every week now, we enjoy another This is the Series That Changes Everything series. But this really is it. Or, at least, could be.

Beyond the AL East, all the other favourites are hitting the skids. Houston is being reeled in by Texas in the West. Kansas City is looking very vulnerable as the best record in the league – Toronto trailed it by four games going into Thursday's night's schedule. The Royals had lost seven of 10.

As such, it's not just the Yankees that the Jays are playing this weekend – it's all of baseball. This has the potential to be a statement series that resonates beyond Canada.

The Jays have begun paying off a lot of historic debts since the trade deadline, but they still haven't broken through completely. People outside Toronto know about them, but they aren't watching them. That could start right here and ride for the next three weeks.

(You'll notice I have resisted the urge to say six weeks. I wanted to very badly but … oh no.)

"I have some wild dreams," manager John Gibbons said about the next little while.

"That's maybe more information than we need," someone said.

They're both right. Anyone who cares about this team has those dreams. They're alive as long as no one feels the need to talk about them.

The final push to connect the two starts this weekend at the intersection of Grand Concourse and 161st Street.

Regardless of how it turns out, this can't be the end of the season in a bad way. But it could in a good one.

Jays get dinner handed to them in embarrassing loss to Red Sox
September 10, 2015 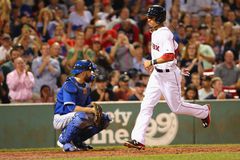 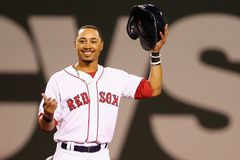 Jays explode for four runs in the tenth to down Red Sox
September 8, 2015 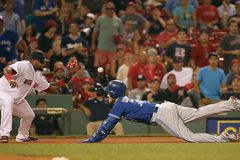