Everything broke right for the Blue Jays to begin with on Monday night.

Cleveland was forced to the bullpen only two outs into the game. Toronto strung together a few hits. Not many, but a couple.

They received another decent outing from their own starter. Not great, but not terrible.

In photos: Blue Jays drop Game 3 of the ALCS

The circumstances are these – Toronto must now win four games in a row to advance to the World Series.

"It's definitely a daunting task, but it's been done before," manager John Gibbons said afterward.

Once. It's been done once in 115 years of baseball.

So while you can't start cutting yet, there is good reason to begin some of the autopsy prep.

What's gone wrong for Toronto over the past four days? Baseball. Baseball has gone wrong.

They've been outhit, outpitched, outdefended, outhustled, outthought and outcoached. As of right now, Cleveland has two reliable starting pitchers. There's no shame in losing, but losing this comprehensively to a team this depleted? It's getting shameful fast. No wonder huge stretches of Monday's game were played in funereal silence.

Once again, the offence was the main culprit – the one-through-five hitters were 2-for-17. Both hits were singles. Most of these crimes of baseball were committed against the chum of the Cleveland bullpen.

A long, withering look will justifiably fall on Jose Bautista. It's not all his fault, but he's always the guy doing all the complaining. On Sunday, he'd spoken darkly of the "circumstances" of this series – Bautista-ese for crap umpiring.

He was bumped to first in the batting order in the hopes of sparking the team.

Instead, we first noticed him in the top of the first as he was awkwardly tracking backward on a long Mike Napoli flyball. Bautista mistimed his jump. The ball hit his glove and rolled out. He slammed into the fence and went down hard. A few minutes later, he struck out.

In all, it was a tidy metaphor for everything the Jays have (not) managed against Cleveland.

But then it all started to shift. You could feel it.

We'd been told Cleveland starter Trevor Bauer "cut" a finger on his pitching hand while repairing a drone a few days ago. Upon reveal, it looked more like an awful gouge.

Cleveland had hoped that Bauer's grotesquely mangled digit would stay stitched for two hours. It lasted about ten minutes.

By that point, blood was quite literally dripping from Bauer's hand, his pants were becoming a Jackson Pollock and Toronto manager John Gibbons was moseying out to complain. Poor Bauer initially tried to hide the offending digit inside his shirt.

Here it was – the turning point. It all seemed too perfect.

Three hours before first pitch, an Ontario judge declined to issue an emergency injunction that would have prevented Cleveland from displaying its controversial logos.

Cleveland didn't respond verbally to the judicial provocation. Instead, they engaged the debate through semiotics.

They could've gone with their standard road greys, which have the word 'Cleveland' stencilled across the chest and a corresponding 'C' cap logo.

That would have been a nice, conciliatory gesture. Which went untaken.

They opted for their home blues, featuring 'Indians' and Chief Wahoo on the hat.

Some series are open warfare. This one had become psy-ops.

As such, this was Toronto's chance to send a message back. That message was "What time is the bus home? Because I'd like to shower quick and get on the first one."

Michael Saunders did hit a home run. Ezequiel Carrera did hit a triple. That's really the end of what Toronto did. Or perhaps it's more correct to say that's the end of the good things Toronto did.

They did kill themselves with leadoff walks, allowed runners to roam at will and maintained their staggering inability to get a hit when it mattered. During the regular season, they averaged about five runs a game. They've scored three in three against Cleveland.

The Jays have looked bent all series long. By the end of Monday night, they were broken.

By contrast, Cleveland was buoyant. Man, they look like they have fun out there.

Like all playoff teams, Toronto's players are currently working for free. It's supposed to be a good time. The Jays making it look more like forced labour.

In truth, Cleveland hasn't been a whole lot better. It's just that every night, one man stands up and does the work.

On Monday, it was Mike Napoli, a man shaped like several sacks of potatoes sewn together. He hit a double, a home run and advanced to second on a ball in the dirt (ed. note: We're going to need to bulk buy exclamation marks). He scored from there.

Unlike in any other game, the real point of possibility was in the first few innings. Once it got deep, you knew Cleveland was going to the meat of its bullpen. By the time Andrew Miller emerged in the eighth, the crowd was close to giving up. The team already had.

So what now? In all likelihood, nothing.

Coming back down 2-0 against Texas a year ago was a little like putting on a pair of jeans and finding a twenty in the front pocket.

Digging out from this point of disadvantage would be the equivalent of a lottery hit. Doing it the way the Jays are currently playing would be finding a needle in a stack of needles.

If you're trying to talk yourself into it, think of it as a matter of psychology and probabilities. In more than 80 per cent of series in which a team goes down three-games-to-none, they are swept.

The question now becomes – How meekly would they like to surrender? 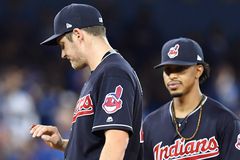 Ontario court denies bid to block Cleveland Indians name, logo
October 17, 2016
Follow us on Twitter @globeandmail Opens in a new window
Report an error Editorial code of conduct
Due to technical reasons, we have temporarily removed commenting from our articles. We hope to have this fixed soon. Thank you for your patience. If you are looking to give feedback on our new site, please send it along to feedback@globeandmail.com. If you want to write a letter to the editor, please forward to letters@globeandmail.com.
Comments