Josh Donaldson was hunkered down in his home in Alabama on Friday night, a 28-year-old being a little kid, playing a retro video game and watching some sports on the television.

It was at that moment that the Major League Baseball all-star third baseman with the Oakland Athletics learned the jarring news that he had been traded to the Toronto Blue Jays.

"I was up in my man cave … and playing some old-school Mortal Kombat and watching the golf channel at the same time," Donaldson said during a telephone conference call on Saturday morning. "I looked down to my right and my phone just started exploding so I decided to check it out.

And what a trade it was.

After shocking the baseball world two weeks ago when he signed catcher Russell Martin to a lucrative free-agent contract Toronto general manager Alex Anthopoulos was back at it on Friday.

That is when word broke that he had acquired one of the game's premier corner infielders.

To pry Donaldson away from Oakland, the Blue Jays had to give up four players, including Canadian Brett Lawrie, Toronto's starting third baseman when he was healthy.

Anthopoulos told reporters during a conference call late Friday night after the deal was completed that he was not seeking to trade Lawrie, a hyperactive, athletic competitor from Langley, B.C., whose progress the past couple of seasons has been slowed by injuries.

"We wanted to keep Brett and add to the team," Anthopoulos said. "We really liked Donaldson, we wanted to get him. Those were the players they needed, those were the players they wanted. As much as you don't want to part with those guys, you're going to have to give up some pretty good players to get a guy like Donaldson. It takes time to come to terms with that I guess when you're on the other side."

Lawrie took to Twitter on Saturday to thank Jays fans for their support.

"I cannot thank you enough for allowing me to Play in my own 'backyard'," he wrote.

He later added: "A's fans ... I look forward to competing everyday for you guys."

Donaldson finished eighth in the American League most valuable player voting in 2014 after batting .255 with 31 doubles, 29 home runs and 98 runs batted in while posting an on-base percentage of .342.

And he is also durable having played in 158 games in each of the past two seasons.

Donaldson said that the moves that the Blue Jays have made is a clear indication to the rest of baseball that they are all in for the 2015 season.

"I 100 per cent can say that they're trying to win right now," Donaldson said. "And what they're also trying to do is prepare themselves for the future. Russell Martin has a longterm deal. I'm not exactly sure where Jose [Bautista] and Edwin [encarnacion] are at in their time. With [Marcus] Stroman and a couple of other guys on that staff, they have a young nucleaus of pitchers who are very talented and very good.

"I definitely think the elements are there to win. It's just about going out there and playing the game and at the end of the day getting the W."

Orginally a first-round draft pick (48th overall) of the Chicago Cubs in 2007 as a catcher, he was traded the following year to the A's who would eventually convert him to third base.

Donaldson actually made his Major League debut on April 30th in Toronto against the Blue Jays in 2010 and hit his first home the next day off pitcher Dana Eveland."

A right-handed bat, Donaldson said that he has carefully studied the swinging habits of Bautista, the Toronto rightfielder who has one of the game's most postent power strokes.

"I started looking for guys who I felt were like comparable as far as body type, as far as what I thought I could do, as far as production, as far as hitting," Donaldson said. "Bautista was a guy at that time he was doing big things and it still doing big things. So I definitely thought about him a lot. I've probably watched thousands of hours of Bautista's swinging and really tried to learn."

Donaldson said that he wasn't expecting to get traded at this juncture of his career, but the thought of coming to Toronto excites him.

"I'm still a little shocked," he said. "But I tell you what, somebody I'd seen on Twitter or something the other day, somebody had put me in one of those Toronto Blue Jays uniforms, in the all-whites.

"I tell you what, those uniforms are pretty sexy." 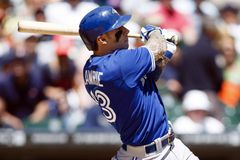 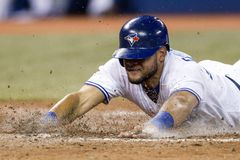 Coffee shops and fan advice: How the Blue Jays got Martin
November 20, 2014 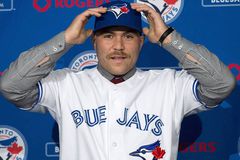