For Mark Shapiro, the new Toronto Blue Jays' president and chief executive officer, and Tony LaCava, the club's interim general manager, the real work will be filling out a threadbare starting rotation for next season's team.

"Marco was a huge part of our success last year," said LaCava. "He started out [in the bullpen] but worked himself into the rotation and he never looked back. He performed great and he was a great teammate. He exemplifies everything we're looking for in a Blue Jays player. He earned this contract."

LaCava was presiding over his first formal player-contract announcement since taking over the GM's duties from Alex Anthopoulos in early November.

With Shapiro coming over from the Cleveland Indians intent on having a larger say in player-personnel matters than outgoing CEO Paul Beeston ever did, Anthopoulos turned down the club's efforts to sign him to a new long-term deal once the 2015 baseball season concluded.

To look at the beaming Estrada and then listen to him speak on Tuesday, it was evident that losing him to another team was never really in the cards. Toronto was the place he wanted to stay.

"I'm excited to be a Blue Jay again," Estrada said. "We've got good things coming our way. I'm really excited for next season. We've got almost everybody coming back and I'm just thankful for the opportunity. And I'm ready to go, ready to get started."

A couple weeks ago, the Blue Jays extended the free-agent pitcher a one-year qualifying offer of $15.8-million. That guaranteed that the club would receive a draft pick in compensation if Estrada were to sign with another team.

In the end, when the Blue Jays offered to lengthen the contract by a year, Estrada decided the security was more important than testing the free-agent waters.

"I felt this was win-win for me regardless," said Estrada, who earned $3.9-million this past season. "Either way, it was going to be a huge jump in pay. Obviously I wanted the years. I would have taken probably less for more years. But it's just the way things worked out. Two years is plenty."

In his first season with the Blue Jays after coming over from the Milwaukee Brewers in a trade for Adam Lind, Estrada went 13-8 with a 3.13 earned-run average over 181 innings. His 13 wins, ERA and innings pitched total all represented career bests.

In the postseason, Estrada was Toronto's clutch pitcher, earning victories in two must-win games, first against the Texas Rangers in the AL Division Series, and then in Game 5 against the Kansas City Royals in the AL Championship Series, where he pitched into the eighth inning in a 7-1 Toronto triumph.

The Royals would go on to eliminate Toronto in six games and then defeat the New York Mets in the World Series.

"I still to this day feel like we had the better team," Estrada said. "Not to take anything away from Kansas City, they're tremendous and they were just hot at the right time. And I did feel like if there was another team that was going to beat us, it was probably going to be them. They were right there with us. They were matched up pretty equally, and they just did all the little things right, and that's what got them to the World Series and eventually [they] won the whole thing. We could have easily have done the same thing. A base hit here or there would have been the difference. It's just the way baseball works sometimes."

Adding to the starting-pitching depth continues to be LaCava's biggest off-season priority heading into spring training in February.

"We've got to keep going and we're going to stay focused on that," he said. "As I mentioned, we're talking to other free agents and we're also engaged with some teams, trying to see if there are any trades out there that can help us."

The Blue Jays currently have Estrada, Marcus Stroman and R.A. Dickey as three of the five starters in the rotation. Drew Hutchison will vie for another one of the openings, and there is still the chance that relievers Aaron Sanchez and Roberto Osuna will be stretched out at camp for a shot at starting roles.

David Price, whom Toronto obtained in a trade deadline deal to help push them over the top in their pursuit of the team's first playoff berth in 22 seasons, is now one of the top arms available on the free-agent market.

LaCava responded coyly when asked if the Blue Jays are hopeful at being able to sign the highly prized Price.

"Without being specific to any one guy, we're engaged with a number of free agents, and we're talking to a lot of teams as well," LaCava responded. 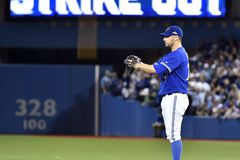 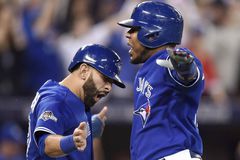