For decades, a circa-1860s Brooklyn Atlantics team baseball card was tucked away, first inside a secret drawer of a bedroom set and then between the pages of a photo album.

Now the pre-Civil War card that's been in the same family for more than 150 years is going on the auction block, where it could bring as much as $50,000 (U.S.).

Heritage Auctions is offering it on July 30 at its Platinum Night Sports Auction in Chicago held in conjunction with the 2015 National Sports Collectors Convention. Online bidding opened on Tuesday.

Florence Sasso, of Great Barrington, Mass., knew little about the card that shows her great-great-uncle Archibald McMahon, an outfielder for the squad, pictured with eight of his teammates in bib-style shirts and two gentlemen in suits.

"My mother gave it to me about 25 years ago," the 75-year-old Brooklyn native said. "We had my grandfather's bedroom set, which had secret drawers, and she kept it there inside a Fanny Farmer chocolate candy box. She gave it to me because no one else wanted it."

Sasso placed it in a photo album and then refiled it in a "McMahon folder" after coming across it one day. But it wasn't until she began taking free genealogy classes at a local senior centre that she looked for it to show a volunteer there who "knew about baseball."

An Internet search came up with another Atlantics card – a post-Civil War card from 1865 – that had recently sold for $92,000 at a small Maine auction.

"We were all jumping around," Sasso said. "I always wondered why people jumped around when they're excited, but I was doing it."

The Atlantics were a founding member of the National Association of Base Ball Players – the sport's first organized league that held the championship from 1859 through 1861.

The card is a photograph mounted on a 2.5-inch-by-four-inch cardboard – known as a "carte de visite" – probably taken in a Brooklyn photo studio. An undated newspaper clipping pasted to the back lists the players' names.

"It's one of the seminal cards from the beginning of the game," said Chris Ivy, director of sports auctions at the Dallas-based auction house. "The fact that it's got a direct link to a member of the team and has been in the same family for over 150 years is very interesting."

The only other known example of the card is in the private collection of Corey Shanus, a Westchester County real estate developer and noted collector of 19th-century baseball memorabilia who acquired his card about 15 years ago in a trade of other memorabilia.

"The Brooklyn Atlantics was the dynasty team of the 1860s. This is the oldest known CDV of a baseball image … it's an extraordinary find," Shanus said in a telephone interview.

"It's the infancy of baseball," he added. "It's a collector's kind of thing. It's just so early."

Among the other players depicted on the card is Richard (Dickey) Pearce, who went on to become one of the first professional baseball players credited with pioneering the shortstop position and inventing the bunt.

The card's provenance can be traced to a 1923 obituary of McMahon's 92-year-old brother. It says John McMahon "also was an ardent baseball fan and had a picture in his home of the original Atlantics team, of which his brother, Archibald McMahon, was a member."

"It's probably the mostly exciting thing that ever happened to me in my life," Sasso said. "I just hope whoever buys it cherishes it. It's a piece of history."

The Gretzky of Gretzky memorabilia selling his collection
May 16, 2013 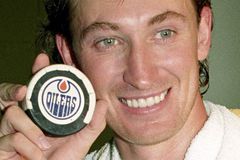 Elvish has left the building: Rare book auctioned had Tolkien verses in English, not Elvish
June 5, 2015 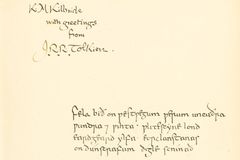 That $12-million McLaren in Sotheby’s window heads to auction
June 4, 2015