Prior to Sunday's game against the Houston Astros, 38-year-old Toronto Blue Jays reserve infielder Mark DeRosa spoke proudly about hitting his 100th career home run on Saturday, and more sweetly about the science of hitting that went into an at-bat against the Los Angeles Dodgers' Chris Capuano earlier in the homestand for his 99th homer.

Capuano had surprised him with a pair of off-speed pitches for two quick strikes before he worked the count to 2-2, waited for a curveball that his study of video indicated would be coming, and spanked the pitch out of the park.

On Sunday, 26-year-old Colby Rasmus waited out reliever Wesley Wright similarly, "telling myself that I was looking for a cookie and not swinging at anything else until I get it." He would chop a full-count sinking fastball up the middle to drive home Emilio Bonifacio with the winning run in a 2-1 victory.

The patient at-bat, in contrast to the club's free-swinging approach, and two innings after Jose Bautista was ejected for the second time in seven weeks for arguing balls and strikes, illustrated the challenge facing Blue Jays general manager Alex Anthopoulos this week, with the non-waiver trade deadline arriving Wednesday.

Will the present roster mature into a winner in 2014 with gentle off-season tweaking, or would Anthopoulos be wise to begin reshaping it now?

The Jays have lost 20 of the past 30 games, finished a critical homestand at 3-7, and are in last place in the AL East as they embark on a 10-game West Coast swing. Several veterans acknowledged the obvious, that they're effectively playing out the string.

With half of the 30 major-league teams within seven games of a playoff position at the start of Sunday's play, the list of available impact players is small. Anthopoulos may find himself in a potentially favourable market situation.

Clubs looking for starting pitching include Boston, St. Louis, Baltimore, Cleveland, Los Angeles, Cincinnati and Arizona. Their primary targets are said to be Jake Peavy of the White Sox, Bud Norris of the Astros and Cliff Lee of the Phillies.

Toronto left-hander Mark Buehrle (6-7, 4.50 ERA) is being mentioned in rumours surrounding the Cardinals. He is owed $37-million (U.S.) in the next two seasons. A proven innings eater and the Blue Jays' most reliable pitcher since early May, Buehrle is within reach of a 13th consecutive 200-inning season, so while his mechanics are perfect, his arm may wear down. He hasn't asked for a trade. Still, he said, in Anthopoulos's place, he would see the advantages of trading him away.

Texas, Detroit, Pittsburgh, Los Angeles and Arizona are looking for bullpen help, and Jays left-hander Darren Oliver could be moved to Texas or perhaps another contender, if only as a favour to him. Oliver, 42, confirmed on Sunday that he intends to retire after the season. He played one more season in pursuit of a championship ring.

"I'm not playing any more after this year," he said. "Of course, I've said that the last five or 10 years so nobody believes me. I've talked with my wife and I'm just going to go ahead and do the paperwork following the season. When she believes me first, everything else will take care of itself. You'll see my name [on the scroll] at the bottom of the TV screen. "

Clubs are expected to ask about all-star relievers Steve Delabar and Brett Cecil, along with closer Casey Janssen.

Baltimore and Pittsburgh are looking for an impact-hitting outfielder, and Bautista, with 24 homers and 64 RBIs, would be a major prize for a contender. The Jays have given no indication that they're considering a trade.

Regarding his ejection, Bautista said: "If I fail on my own, it upsets me, and if I feel like opportunities are being taken away from me, it upsets me even more." However, the club seems to be growing weary of Bautista's reactions, however justified by errant calls. "I understand his frustration," Jays manager John Gibbons said. "But we need him on the field." 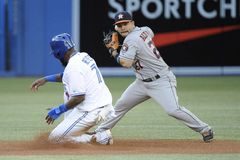 Encarnacion's two home runs in one inning, one a grand slam, seals win for the Blue Jays
July 26, 2013 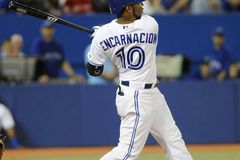 Johnson gets knocked around again as Jays lose to Astros
July 27, 2013 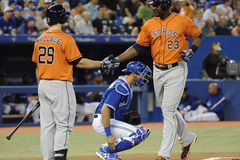