Aaron Sanchez learned not to let little things bother him.

Sanchez allowed two hits in seven innings of one-run ball, and Jose Bautista drove in two runs with a solo homer and a double to lead the Toronto Blue Jays over the Boston Red Sox 5-3 Sunday.

Cruising with a no-hit bid two outs into the fifth, Sanchez gave up a broken-bat single to Marco Hernandez, playing in his first major league game. Sanchez dropped his head a bit and muttered.

A stolen base and run-scoring single later, he was back in the dugout. It didn't affect the rest of his outing.

"I think that was a big learning curve. That only happened a start ago," the 23-year-old right-hander said. "For me, it's going back out there, attacking the zone and not letting something affect me like I did my last start."

"I've seen young guys that give up a hit and give up a run, and the next thing you know they've imploded," he said. "That stood out to me. I've seen it too many times before."

Edwin Encarnacion added two singles and a run batted in for the Blue Jays, who had lost two in a row and were 1-4 against the Red Sox. Kevin Pillar had three singles and made two nice catches in centre after being dropped from leadoff to eighth in the batting order.

Travis Shaw hit a two-run homer off Jays closer Roberto Osuna in the ninth inning, but Osuna recovered to retire the next three Boston batters in order.

The teams meet in the finale of the four-game series on Monday in Boston's annual Patriots' Day game, which is scheduled for an 11:05 a.m. start and coincides with the running of the Boston Marathon.

Steven Wright (0-2) had his second good start against the Blue Jays in eight days. The knuckleballer gave up two runs and six hits in six innings, struck out six and walked none.

"They pitched better," Wright said. "He [Sanchez] was nasty. He was throwing upper 90s. He was hitting his spots, changing his speeds really well."

After scoring just five run in the previous two days, the Blue Jays took a 2-0 lead in the first.

Bautista's homer caromed off the left-field foul pole and rolled behind the infield, where it was picked up by third-base umpire Angel Hernandez. The Jays followed with three straight singles, with Chris Colabello driving in a run.

Hernandez, making his major league debut, had his soft liner drop into left in the fifth when his bat shattered and went back into the new protective screen along the first-base line. He scored on Mookie Betts's single.

Josh Donaldson's run-scoring double off the Green Monster made it 3-1 in the seventh. Encarnacion had his run-scoring single in that inning.

Toronto had a scare in the fourth inning when Colabello was hit on the head by a fastball of 87 miles an hour from Wright. After being seated on the ground for a few minutes and checked out by a trainer, he got up and trotted to first. Wright walked down and the two briefly spoke, which appeared cordial.

Colabello said he was fine afterward.

"He said something to me coming down the line and again when the inning ended," he said. "He was so apologetic."

And Pillar regained a bit of confidence, Gibbons suggested, when he robbed Ryan Hanigan with a sliding catch in the fifth and made a running grab with a leap at the wall against David Ortiz the next inning.

"He needed that. He's been scuffling a little bit," Gibbons said. "One thing you know you're going to get is stellar defence."

Toronto's J.A. Happ (0-0, 3.00 ERA), who has given up two runs or fewer in each of his initial two starts, hopes to keep his string of solid starts going Monday. He's facing right-hander Clay Buchholz (0-1, 10.00), who has allowed five runs in each of his two starts. 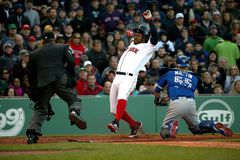 Dickey disappoints again in Blue Jays’ loss to Boston
May 16, 2018 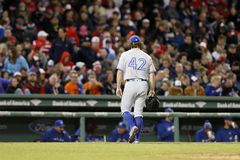 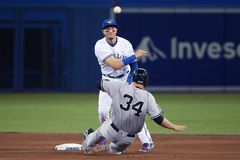