With Blue Jays down 5-0 and Max Scherzer comfortably on his way to a 13th victory without a loss, in the fourth inning of Wednesday night's game Colby Rasmus slid hard, directly into the leg of second baseman Omar Infante. His Tigers teammates suspect that Rasmus's slide might have inflicted a knee injury or high ankle sprain, as Infante got up slowly and limped off the field.

Two innings later, Blue Jays reliever Todd Redmond hit Torii Hunter on the shoulder with a pitch. When Hunter jawed at Redmond, both benches and bullpens emptied, albeit hesitantly.

"It was all about Rasmus sliding with his spikes up," Hunter said, after the Tigers dispatched the Blue Jays, 6-2, in front of more than 28,000 at the Rogers Centre o Wednesday. "No way he's getting a double play there, and the score's 5-0. Infante's a very important piece of our ball club. Nothing against the young man Redmond, but I was upset with that play."

Rajai Davis, difficult to double-up as one of the speedier players in the league, had grounded to shortstop Jhonny Peralta in the hole, with Rasmus on first. Rasmus slid late, striking Infante behind the second-base bag.

"Nothing no different than I ever do," Rasmus said. "I go in hard every time. My intention is not to hurt anybody. That's the way I was taught to play."

Scherzer called the play "very dirty" but did not retaliate, and manager Jim Leyland withheld comment other than to say the team is relieved the injury appeared to have been limited to a shin bruise. The Tigers are especially sensitive, as pitcher Rick Porcello got suspended six games on Tuesday for hitting Ben Zobrist of the Tampa Bay Rays, in retaliation for Rays closer throwing high-and-in on Detroit slugger Miguel Cabrera in the previous game.

"If we were to retaliate on [Rasmus], we would get suspended," Scherzer said. "But really, he should be suspended. There's no reason to slide in late like that. The whole suspension thing is only when you throw at someone. That's not right."

Should the Tigers elect to plunk him in Thursday's series finale, the last game of the season between the two clubs, Rasmus is prepared to shrug it off.

Scherzer is otherwise attracting attention these days with a relentless attack on baseball's history books. He set a franchise-record with a 13th consecutive win without a loss to start a season, the first to accomplish that feat since Roger Clemens went 14 straight for the Boston Red Sox in 1986.

"I don't put too much stock in the win-loss record," he said. "I judge a season on how I pitch and right now I'm doing a lot of things right, minimizing the walks. I'm giving the team a chance to win, and they've gone out every time and won."

He has now logged 18 starts dating back to last season without a loss, tying a 73-year-old club record established by Bobo Newsom in 1940.

By striking out eight in 6-1/3 innings, he has fanned at least six batters in all 17 starts this season, the second longest such streak in American League history behind Pedro Martinez's 29-gamer to begin the 2000 season for the Red Sox.

Toronto manager John Gibbons tried to counter Scherzer by using Jose Bautista, batting .347 at Rogers Centre entering the game, in the No.-2 slot to max-out his at-bats. Adam Lind, returning to the lineup after leaving Sunday's game with back spasms, hit third in place of Edwin Encarnacion (hamstring strain), while Rasmus went into the cleanup slot for the second time this season. Davis, hitting .359 with 15 stolen bases in his previous 27 games and thriving recently in the 2-slot, was moved to fifth in the order.

Lind and Rasmus whiffed back-to-back to strand Bautista (double) on second base in the first inning, Rasmus with his 101st strikeout. Scherzer struck out four of the first five hitters faced, and Lind fanned three times before the 28-year-old right-hander gave way to reliever Bruce Rondon in the seventh.

Scherzer has received nearly eight runs per game of offensive support this season, highest in the AL.

The Jays committed three errors in the first three innings, two by starter Josh Johnson (1-3), to pave a path for five unearned runs.  In the second inning, second baseman Emilio Bonifacio let a double-play grounder go through his legs, and that play came immediately after he'd failed to charge a ball hit by Prince Fielder off Johnson's glove. Ultimately, his error led to Peralta's RBI single and Alex Avila's three-run homer for a 4-0 lead.

Detroit obtained Scherzer, a No. 1 draft choice in 2007, from Arizona in a three-team trade in December of 2009 that involved the New York Yankees. GM Dave Dombrowski also netted Austin Jackson in that transaction, and from the press box on Wednesday he witnessed the centre fielder make a leaping catch of J.P. Arencibia's long fly to end the inning with Mark DeRosa on third with his first triple since the 2009 season.

The lead had grown to 6-0 when Rasmus and Maicer Izturis delivered RBI singles in the fifth inning.

After Chien-Ming Wang failed to get out of the second inning on Tuesday night in a 7-6 loss to the Tigers, Gibbons was looking for a long outing from Johnson, who had lasted just 3-1/3 innings in his prior outing last Saturday in Boston. Instead, Johnson worked five innings. Wang was sent to Triple-A Buffalo, replaced by Redmond.

The Jays (41-43) have six wins and seven losses in a 14-game stretch against the Orioles, Rays, Red Sox and Tigers. They face Detroit ace Justin Verlander (8-5, 3.77 ERA) as the four-game series wraps up on Thursday night. 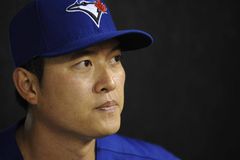 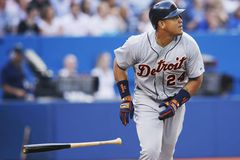 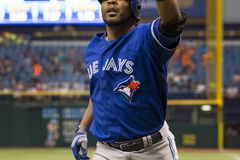 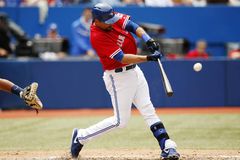