Justin Smoak felt like he let the team down in the first inning when he struck out with two men on and nobody out.

The Toronto slugger made up for it in a big way.

Smoak belted a two-run homer in the seventh inning and launched a grand slam in the eighth to power the Blue Jays to a 7-4 win over the New York Yankees on Sunday.

The go-ahead blast came on the ninth pitch of a showdown with Yankees setup man David Robertson (0-1). Smoak was thrown four straight breaking balls before he turned on a 93-m.p.h. fastball.

"I was able to have that last good swing on it."

The victory gave Toronto (2-2) a split of its season-opening four-game series at Rogers Centre.

Tyler Clippard (1-0) worked an inning of relief for the win and Seung Hwan Oh pitched the ninth for his first save. Smoak, who tied a career high with six runs-batted in, had three of Toronto's 12 hits.

"You can't do any better than he did today," said Toronto manager John Gibbons. "Especially with the game on the line, down a run and two outs against one of the top relievers in baseball."

Toronto starter Marcus Stroman was on a pitch count after being hampered by a right shoulder injury at spring training. He laboured through a 21-pitch first inning – walking a pair – before escaping with back-to-back strikeouts.

In the bottom half, Yankees starter Sonny Gray walked Devon Travis, who moved to third on an infield single by Josh Donaldson. Gray responding by fanning Smoak and the next two batters.

Stroman was in form until giving up a two-out walk and three straight hits in the third inning. Brandon Drury capped the four-run frame with a two-run homer.

"I think it was probably one of the worst sliders I've ever thrown in my life," Stroman said. "It just kind of casted out."

It was Drury's first home run as a Yankee. New York managed just five hits on the afternoon.

Gray was pulled after giving up a leadoff single to Smoak in the fifth inning. The right-hander allowed one earned run, seven hits and three walks while striking out eight.

Donaldson walked in the seventh inning before Smoak hit his first homer of the season on a 1-0 pitch from Tommy Kahnle.

In the eighth, Martin led off with a single and moved to third on a one-out double by Aledmys Diaz. Travis grounded out and Donaldson was intentionally walked before Smoak hit his second career grand slam.

"I threw everything I had at him," Robertson said. "He just won today."

The game took three hours three minutes to play and announced attendance was 29,091.

Toronto will close out its seven-game homestand with a three-game series against the Chicago White Sox starting Monday night. 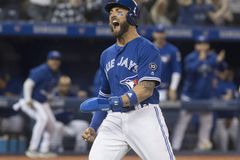 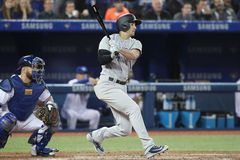 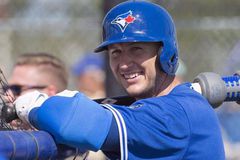