Marcus Stroman was the last to leave the dugout, as he always is, when the Toronto Blue Jays took to the field for the first time for their game Wednesday night against the Tampa Bay Rays at Rogers Centre.

The spotlight now his own, Stroman doesn't exit the dugout as much as he makes an entrance onto what will be his stage for the next several hours, leaping like a ballet dancer as he alights onto the artificial surface.

As he bounces his way toward the mound, the golden hardware that is draped around his neck sways this way and that. On a mere mortal it would likely bring on whiplash, but the bling suits Stroman.

As is his habit, Stroman circles in behind the mound, from where he fires his first warmup pitch long distance to catcher Raffy Lopez before settling onto the rubber.

Height Doesn't Measure Heart proclaims Stroman's copyrighted slogan. Nor does it gauge showmanship, which this brash 26-year-old possesses in abundance.

Welcome to the Stro Show, starring the stutter-stepping Blue Jays starting pitcher whose on-mound antics every fifth day have helped to liven up what otherwise has been a mostly mediocre season for the American League team.

Stroman had his good stuff again on Wednesday, pitching a precise, sound game while inducing oodles of ground balls as the Blue Jays (58-62) hung on to defeat the Rays (60-62) 3-2 to take a 2-1 lead in the four-game set.

Steve Pearce hit a home run, his 12th in the fourth inning, to provide the Blue Jays a 2-1 lead. Pearce also doubled and scored Toronto's third run when Goins singled through the middle on a drawn-in Tampa Bay infield in the sixth.

Stroman lasted 6 1/3 innings and allowed two runs off six hits with seven strikeouts before he tired noticeably. He had to be bailed out by his bullpen after leaving the bases loaded with his team leading 3-1.

Aaron Loup walked the only batter he faced to force in the second Rays run, which led to the ejection of Toronto manager John Gibbons. The skipper was none too happy with the strike zone being proffered by home plate umpire Lance Barksdale.

On came Dominic Leone, only just welcomed back to the Blue Jays lineup earlier in the day, and he got Evan Longoria looking for a big strikeout. Leone then induced a pop out from Logan Morrison to halt the damage right there.

Stroman is pumped up at the best of times but was especially so on Wednesday, several hours before he even set foot on the playing field.

Normally it is the starting pitcher who gets to choose the music that is played in the clubhouse before the start of the game.

Stroman, clad in his black undergarments, was listening on headphones while sitting in front of his locker.

He would occasionally belt out an off-key line or two from whatever song was rattling his ear drums, much to the bemusement of first baseman Justin Smoak, his nearby locker mate and captive audience.

But when it has come to his performance on the field this season, Stroman has been almost pitch-perfect, a ground-ball maestro who finds ways to compete deep into almost every contest.

Before the game the Blue Jays activated catcher Miguel Montero from the disabled list where he has been recovering from a sore groin. Leon was also reinstated from the bereavement list.

To make room on the 25-man roster, left-handed pitcher J.P. Howell and catcher Mike Ohlman were both designated for assignment.

The Blue Jays appear to have dodged another injury setback after Ryan Goins, himself already subbing at shortstop for the disabled Troy Tulowitzki, proclaimed himself alright after injuring himself getting thrown out trying to steal second in the sixth inning.

Goins made a head first dive hoping to beat the throw and the cleated foot of Tampa Bay shortstop Daniel Robertson came down heavily on the Blue Jays' extended left arm as Robertson applied the tag.

Goins was replaced in the lineup the next inning by Rob Refsnyder, who took up at second base with Darwin Barney being shifted over to short.

After the game, displaying a nasty-looking abrasion on the forearm, Goins said he expected to be okay.

"It was more numb at the time, I think because it was smashed," Goins said. "But it's not as bad now so come back [on Thursday] and figure it all out."

Roberto Osuna came on in the ninth to earn his 31st save. 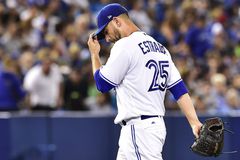 Regardless of the position, Blue Jays’ Ryan Goins just loves to play
August 14, 2017 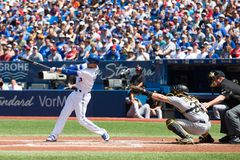 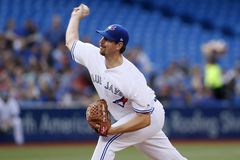