The Toronto Blue Jays are flat, which is shocking considering the time of year and what's at stake. The pitching has been so-so and the offence is more miss than hit. The thrill-a-minute ecstasy that last year's squad provided through the stretch drive and into the playoffs is now but a fading memory.

With the way the Jays continue to perform, looking lost at the plate and sullen in the clubhouse, the chances of being able to replicate those heady days seem slender at best as the club now heads out for a seven-game West Coast road trip.

Wednesday's abysmal affair at Rogers Centre was the latest example of how things have turned so drastically wrong for a team that was basking in first place in the American League East a little over a week ago.

The Tampa Bay Rays, who have long been factored out of the playoff picture, ran roughshod over Toronto, pounding their way to a convincing 8-1 win in a game in which the Blue Jays mustered just two measly hits.

Tampa Bay starter Alex Cobb, in just his third game since returning from a lengthy rehab after having Tommy John ligament reconstruction surgery, was electric, allowing the lone Toronto run off two hits over 6 2/3 innings.

The Rays took two of three this week from the sinking Blue Jays, who now find themselves in third place in the East, 2 1/2 games behind the front-running Boston heading into last night's Red Sox game against the second-place Baltimore Orioles.

Toronto has now lost its past four series and has won just four of its last 14.

The only positive is, despite all the carnage, the Blue Jays are clinging to the second AL playoff wild-card berth, but even that is tenuous with Detroit and New York nipping at their cleats.

"We've just got to start winning some games, that's for sure," beleaguered Jays manager John Gibbons said in what has to be his biggest understatement of the season.

"It just seems even worse because we're all struggling right now," said Marco Estrada, the Toronto starting pitcher who lost his third consecutive outing on Wednesday.

"It's kind of been a snowball effect. We've just got to stop it. We've got to find a way to do it.

Playing a third straight game without their offensive catalyst, third baseman Josh Donaldson, who continues to be plagued by a sore hip, the Toronto started out strong against the Rays.

Estrada was in control early on – striking out Logan Forsythe on an 89-mile-per-hour fastball to open the game, then fooling Kevin Kiermaier, who swung way out in front of a 79-mph changeup.

Evan Longoria was Estrada's third strikeout victim, getting caught looking on a cutter.

Estrada would go on to retire Brad Miller and Nick Franklin on strikeouts to begin the second inning, becoming the first Blue Jays pitcher to ever strikeout five straight batters to start a game.

"It's unreal the way this game works out," bemoaned Estrada afterward. "I felt really good."

Everything was going so well on all fronts for the Jays.

On offence, Devon Travis led off with a double to extend his hit streak to 11 games and was then sacrificed – sacrificed! – to third base on a bunt by Michael Saunders.

It marked just the 19th time this season that the Blue Jays have resorted to small ball, and the gambit worked as Edwin Encarnacion lifted a sacrifice fly to centre to give Toronto a feel-good 1-0 lead.

Meanwhile, Estrada cruised into the fourth still with a perfect outing on his plate. But not for long.

Forsythe broke that up with a leadoff single, and when Kiermaier then plunked one over the left-field wall off Estrada, the Rays had a quick 2-1 lead.

Estrada, a bit rattled by all that, walked the next batter, Brad Miller, who would come around to score on a single by Corey Dickerson.

The Jays troubles went from bad to worse in the three-run sixth, highlighted by a two-run home run shot by Dickerson off Matt Dermody, who had just come on in relief of Estrada.

Estrada allowed four runs off four hits over 5 1/3 innings, walking three and striking out seven. His record fell to 8-9.

"It looked like he hit a wall and he was starting to labour there in the fifth inning," Gibbons said of his starter. 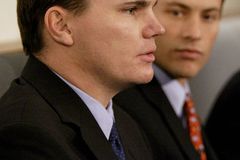 Donaldson out of Blue Jays lineup for third game, will get MRI on hip
September 14, 2016 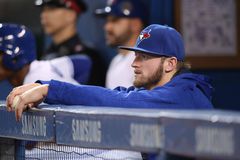 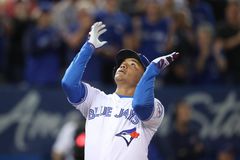