During one spring training at the height of his powers as a Toronto Blue Jay, Roy Halladay was asked to shepherd a painfully ill boy named Sean Clayton around the club's facility. It was Sean's wish to meet the best pitcher in baseball.

As a rule, Mr. Halladay did not do interruptions. He was obsessed with routines to the point of mania. But he broke them that day to spend hours with Sean. They ended up huddled together in a dugout, forehead to forehead, whispering and sharing a bag of sunflower seeds.

"It's the good part about being a baseball player," he said.

Mr. Halladay was already perhaps the greatest pitcher ever produced by the Toronto organization, and on that day it occurred to you that he was one of its great people as well.

Mr. Halladay, 40, died Tuesday in an aircraft crash in the Gulf of Mexico just off the coast of Florida. Police said he was alone in the plane, but couldn't confirm where the plane was headed. The cause is thus far unknown. The National Transportation Safety Board is investigating.

According to his social-media feeds – something Mr. Halladay embraced impishly once he quit his day job – he took delivery of an amphibious, two-seat craft three weeks ago.

The aircraft's manufacturer released a video at the same time, featuring Mr. Halladay and his wife, Brandy.

In it, Mr. Halladay explains that his father was a pilot and that getting his own pilot's licence was a goal he had put off until after he'd left baseball.

"She's fought me the whole way," Mr. Halladay says, grinning at his wife.

It's difficult to watch that video now, knowing that something said playfully has been awfully realized.

But having known him just a little, it's difficult to imagine there was any way to stop Mr. Halladay from doing something he wanted to do. He had a remarkable ability to make his wishes real.

He was a standout talent in high school, drafted in the first round by Toronto, sprinted up the minor-league levels, made his debut for the Blue Jays when he was 21 and then very nearly fell apart. He was sent back to the minors and completely remade.

Somewhere in that process, Mr. Halladay stopped being a pitcher, and instead became the brain that operated a pitcher's body.

He came under the influence of a sports psychologist named Harvey Dorfman and his book, The Mental ABC's of Pitching. Though he'd memorized most of it, Mr. Halladay enjoyed holding a copy of Mr. Dorfman's instructional in his hands as he rocked Talmudicly at his locker, reciting passages to himself.

That was the only sort of speaking he appeared to enjoy. Though an enormous man – 6-foot-6, 225 pounds – Mr. Halladay had a way of hunching to make himself seem smaller. He did not like being noticed and never seemed to fully warm to his nickname, Doc.

Mr. Halladay had trouble explaining how he became so good – two-time Cy Young winner, eight-time all-star, owner of a perfect game as well as a playoff no-hitter – and didn't like trying. After watching him for years, one suspected it was more an act of will than physicality or mechanics.

One of his teammates, David Purcey, summed it up thusly: "Some guys can pitch. Doc paints."

On one occasion, Mr. Halladay's signature weapon – the cut fastball – deserted him briefly. He made a small adjustment to resuscitate it. Asked to demonstrate what he'd changed, he moved his finger a micrometer across the ball.

"It's everything," Mr. Halladay said.

There is an overdone tendency to attribute shamanistic qualities to a certain type of athlete, but Mr. Halladay made it unavoidable. When you tried to get inside his cognitive regimen, he'd say he'd quit playing chess because he'd got "too deep into it," or explain how he spent his downtime on the bench reconstructing outfield placards in his mind in order to hone his mental acuity.

While other guys sat in the clubhouse playing cards before a game, Mr. Halladay would be in the back sprinting on a treadmill. He worked out so hard in the off-season that he consumed 7,000 calories a day just in order to maintain his weight. His ethic was so Herculean that it made everyone around him vaguely ashamed of themselves, including his teammates.

Though fantastically rich and famous, he kept a wry perspective on what it all meant. When then-U.S. president George W. Bush said that the Toronto ace was his favourite pitcher, Mr. Halladay deadpanned, "Any time the leader of a country acknowledges you, it's cool."

He only rarely showed that human side in public, most often with his two young sons. I recall a night in Colorado. Mr. Halladay had pitched, though I couldn't say how well.

Afterward, he came out of the visitor's clubhouse and spotted his father waiting there in a crowd. Mr. Halladay lit up. He skipped across the hallway and folded himself down and into the smaller man's arms like a child. The next day, after recharging his cells, he was returned to robotic efficiency.

Some very talented athletes are deep, but Mr. Halladay was an ocean. You could not know or explain him. All you could do was enjoy what he did.

He left a moribund Jays organization after the 2009 season in order to give winning a spin in Philadelphia. Such was the regard he was held in, that not a single person in Toronto begrudged him the chance.

He never did get his World Series ring, but has probably done enough to earn a place in baseball's Hall of Fame. He'll first appear on the ballot in 2019.

Upon leaving the Phillies in 2013, he signed a one-day contract with Toronto so that he could retire with the club that gave him his chance.

After quitting baseball, Mr. Halladay seemed to take a conscious decision to lighten up. He fished more and gained a little paunch. He deployed an endearing, middle-age-dad-style of humour on Twitter – every picture of Mr. Halladay grinning or clowning around still seems odd to those who knew him when he played.

He coached kids some and got his pilot's licence. He did all the things he couldn't when he was too busy being utterly consumed by becoming one of the great ballplayers of the 21st century.

Forty is far too soon, but the breadth of Mr. Halladay's accomplishments cannot be defined by time. He decided what he wanted to be and he became that, again and again.

What better thing can be said of any life? 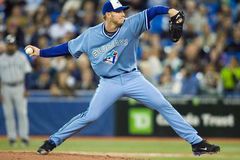 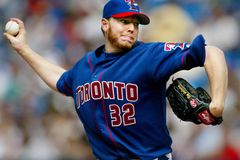 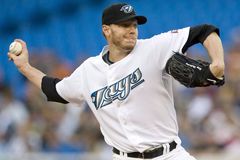 Roy Halladay, Vladimir Guerrero to join Canadian Baseball Hall of Fame
April 14, 2017
Follow us on Twitter @globeandmail Opens in a new window
Report an error Editorial code of conduct
Due to technical reasons, we have temporarily removed commenting from our articles. We hope to have this fixed soon. Thank you for your patience. If you are looking to give feedback on our new site, please send it along to feedback@globeandmail.com. If you want to write a letter to the editor, please forward to letters@globeandmail.com.
Comments