The scene for the 2015 American League Championship Series shifted from Toronto to Kansas City again Friday, with the Blue Jays looking to avoid elimination in the best-of-seven series 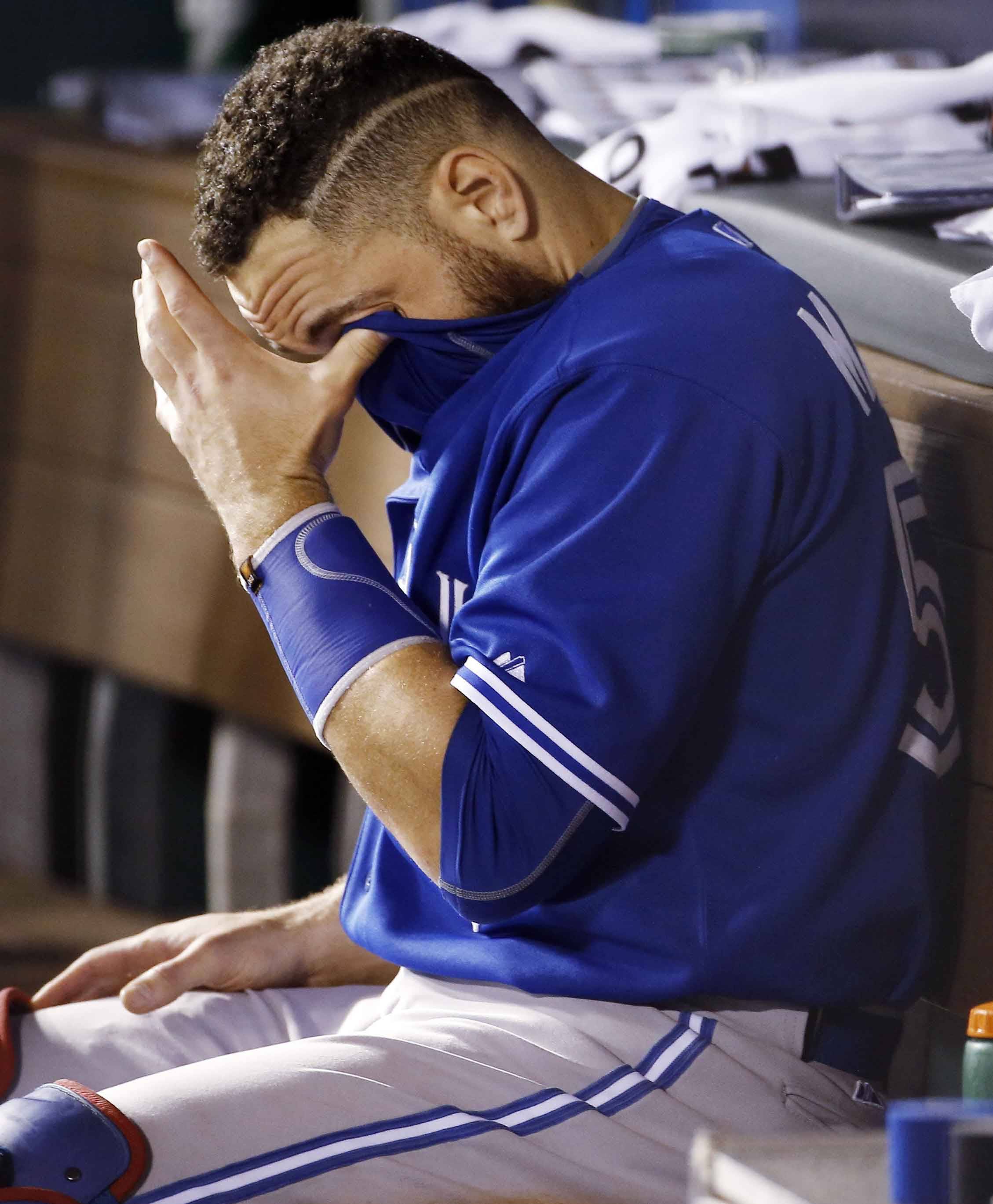 – Top of 1st inning: Blue Jays LF Ben Revere drills a lead-off double down the 1st base line. SS Josh Donaldson strikes out swinging, is thrown out at first base. Revere stays at second base. Bautista pops up to shallow right field, Royals RF Alex Rios makes the out. Toronto DH Edwin Encarnacion grounds out to end the inning. Revere left on second base.

– Bottom of 1st inning: Royals SS Alcides Escobar grounds out to second base where Jays Ryan Goins picks it and delivers a strike to first base. One out. Ben Zobrist takes an inside pitch and pulls it down the LF line for a solo home run. Lorenzo Cain grounds out for out number two. And Eric Hosmer grounds out to Troy Tulowitzki, ending the inning.

– Top of 2nd inning: Jays 1B Chris Colabello flies out to LF for the first out of the inning. Troy Tulowitzki grounds out to Royals 3B Mike Moustakas. Catcher Russell Martin strikes out looking to end a quick 1-2-3 inning.

– Bottom of 2nd inning: Jose Bautista catches a long fly ball in left-centre field hit by Kendrys Morales for the first out of the inning. Mike Moustakas hits a bomb to CF, it's caught by a fan in the first row of the outfield. Play under review to see if it qualifies as a home run. Umpires review with officials in New York. Ruled a home run. Royals lead two-nil. David Price comes back with a called third strike curveball on Royals catcher Salvador Perez, making the second out. Alex Gordon strikes out for the third out of the inning.

– Top of 3rd inning: Jays CF Kevin Pillar nearly hits a home run to get the Jays on the board, but it hooks just foul. Then he lines out to Royals 1B Eric Hosmer, who leaps to get the out. Number-nine hitter Ryan Goins strikes out for the second out of the inning. Top of the order comes up to the plate but Ben Revere also goes down swinging to end the inning.

– Bottom of 3rd inning: Jose Bautista catches a high fly ball in foul territory. Alex Rios is the first out for the Royals. Royals SS Alcides Escobar also flies out to Bautista in right field. Two outs. Zobrist steps up the plate, Price works the count to 3-2 and walks the Royals second baseman. Lorenzo Cain hits a little roller between Price and Goins, dies on the infield green, allowing Cain to reach first base safely. Runners now on first and second, with Eric Hosmer up at the plate. Hosmer hits a chopper toward Goins, who charges and cleanly fields it to get the Jays out of tough spot. Inning over; Royals leave two on base.

– Top of 4th inning: Josh Donaldson starts the inning, hits a routine ground ball to SS Alcides Escobar for the first out of the inning. Jose Bautista smacks the ball so hard it's surprising the cover doesn't come off it. Lands deep in the stands behind the left field fence. Solo home run cuts the Royals's lead to 2-1. Edwin Encarnacion up next but grounds to third base for the second out. Chris Colabello keeps the inning going by hitting a single to straightaway left field on the first pitch. Jays SS Troy Tulowitzki up next, works Royals pitcher Yordano Ventura to a 3-2 count and then watches the third strike paint the outside corner. Colabello left on base. 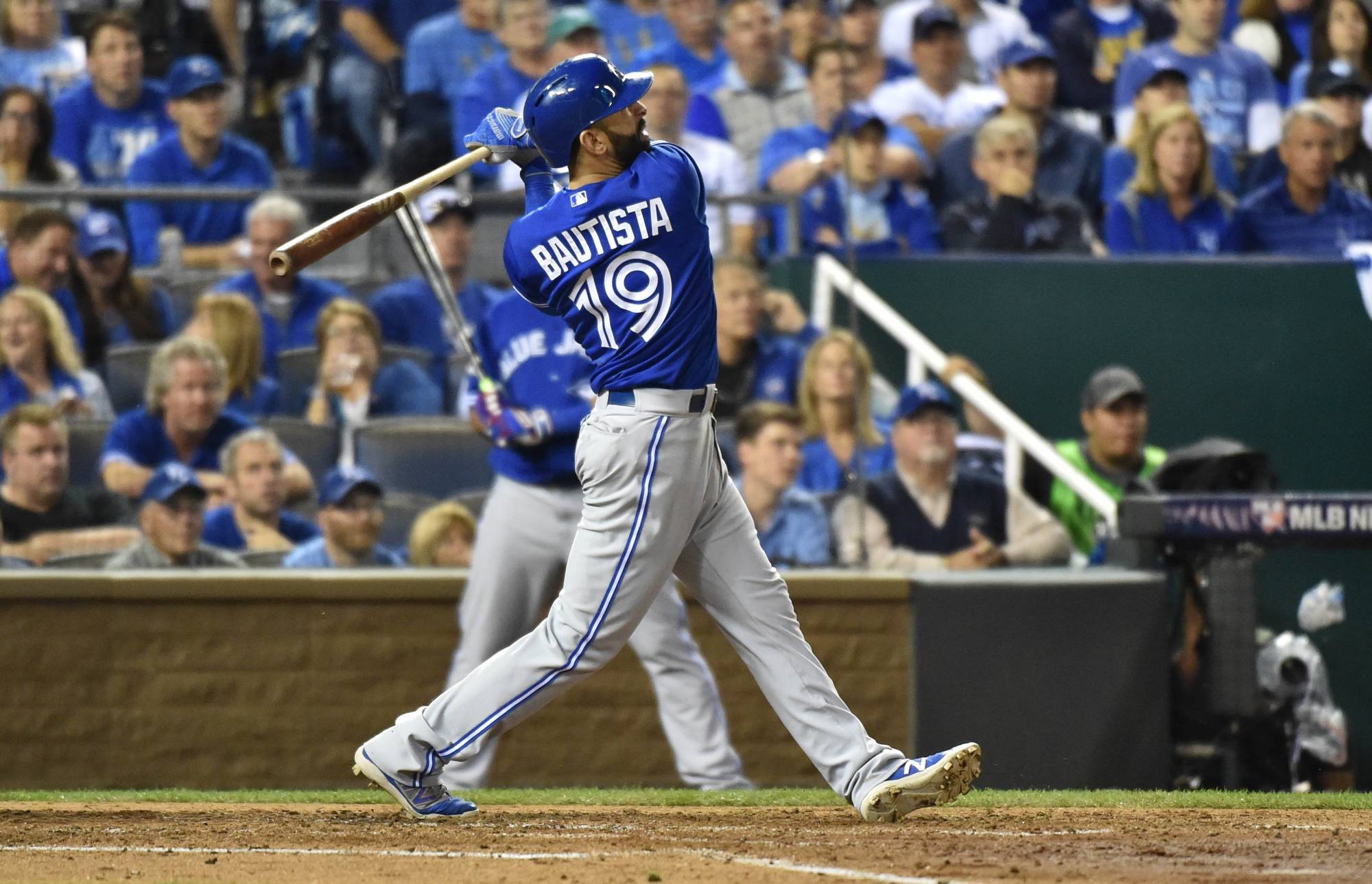 – Bottom of 4th inning: Inning starts with a strikeout as DH Kendrys Morales whiffs at strike three. Price hands Moustakas a chair as he watches the third strike knick the inside corner. Two outs. Price strikes out the side, catching Roayls catcher Salvador Perez looking at a third strike.

– Top of 5th inning: Jays catcher Russell Martin walks to start the inning. Kevin Pillar shows a bunt at 1-0, pulls back for ball two, then works the count to 3-1. Pillar watches ball four skim the dirt. Martin advances to second base. Royals reliever Luke Hochevar begins to warm up in the bullpen. Goins watches the first strike, then bunts foul down the third-base line, bringing the count to 0-2. After fouling a few off, Goins flies out to Lorenzo Cain in centre field. Runners stay at first and second base. One out. Ben Revere up, looks at a first-pitch strike, then flies out to left field. Martin and Pillar still stuck at second and first base. Donaldson hits a low line drive that Mike Moustakas makes a diving catch to his left to get the third out of the inning. Jays leave two on.

– Bottom of 5th inning: David Price strikes out Alex Gordon, the fourth batter in a row. Fans cheer as Alex Rios rips one down the left field line, but it's foul. Rios then hits a single up the middle. Next up is SS Alcides Escobar. Price strikes out Escobar with a cutter. Alex Rios steals second, but Blue Jays challenge the call. Call stands; Rios is safe. Royals second baseman Ben Zobrist pops up the second to end the inning. Royals strand Rios at second.

– Top of 6th inning: Royals starter Yordano Ventura back out to start the inning. Jose Bautista pops up, grimaces as the ball is easily caught to mark the first out. Edwin Encarnacion hits one to the gap in left-centre field, slides into second base for a double. Royals manager Ned Yost comes out to the mound and pulls Yordano Ventura. Kelvin Herrera now pitching for the Royals; throws a first pitch strike to Chris Colabello. Colabello strikes out on a fastball. Two outs. Troy Tulowitzki pops up for the final out. Jays leave the tying run on second base.

– Bottom of 6th inning: Lorenzo Cain leads off the inning for the Royals. David Price starts the inning with 74 pitches thrown in the first five innings. Troy Tulowitzki fields a ground ball from Cain for the first out. Price gets his eighth strike out of the night when Eric Hosmer goes down swinging. Two out. Price jams Kendrys Morales on the inside, he pops up. Catcher Russell Martin and third baseman Josh Donaldson collide in foul territory. Somehow Martin holds onto the ball, ending the inning. 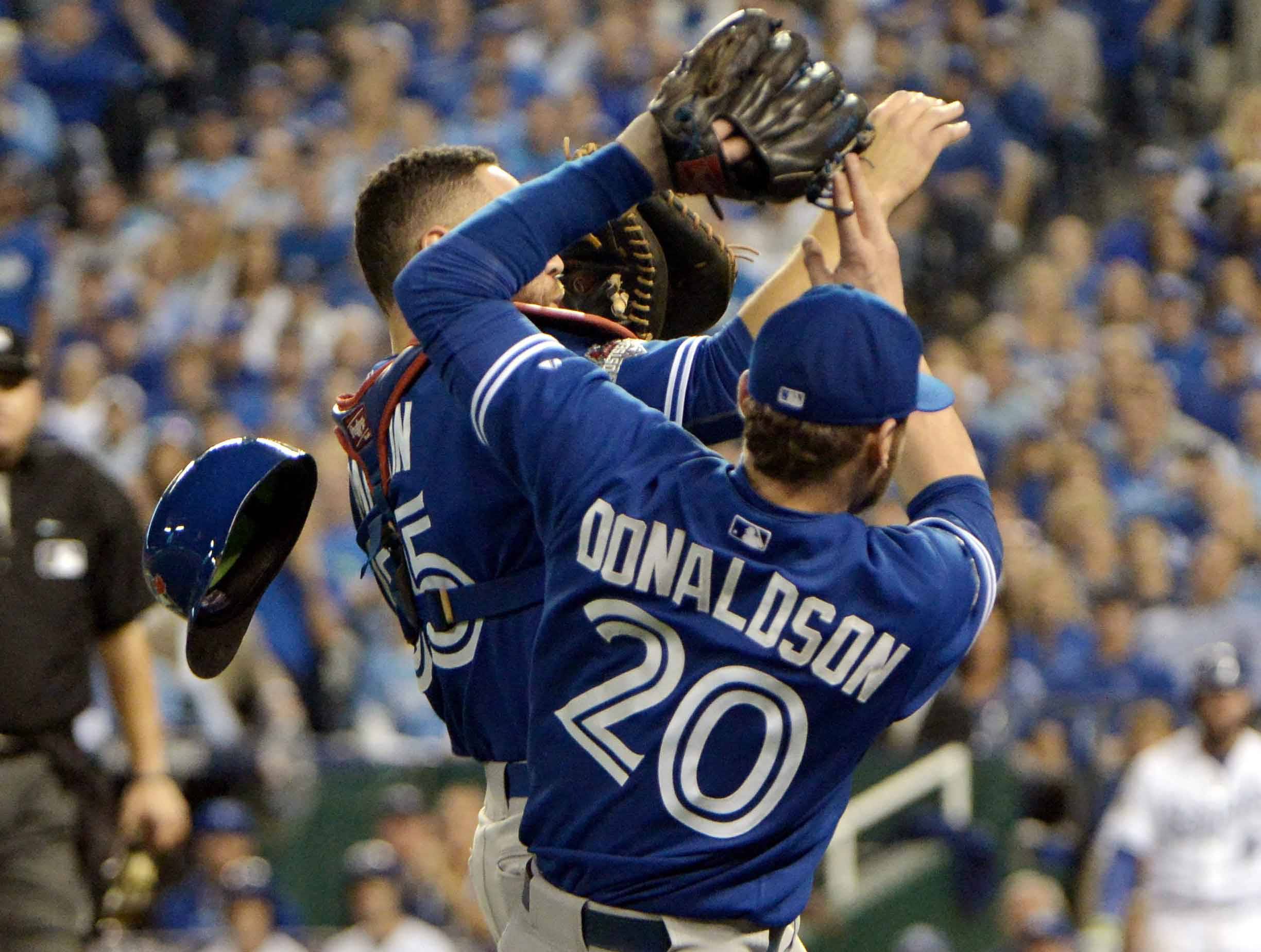 I think the Blue Jays need to devote one full practice to calling for the ball.

– Top of 7th inning: Russell Martin to lead off for the Jays. He looks a 100 mph ball off the outside of the plate. Martin releases a profanity as he pops out to CF. One out. Kevin Pillar hits to opposite field, as Royals right fielder Alex Rios catches it near the foul line. Ryan Goins works the count to 3-2 against Kelvin Herrera. He delivers a big swing but misses. Herrera has a 1-2-3 inning, leaving Jays with only six outs to score.

– Bottom of 7th inning: Mike Moustakas strikes again, sending the ball into shallow centre field for a base hit on a broken bat. Salvador Perez launches the ball deep into left field, where Ben Revere leaps into the air, stealing an extra-base hit from Perez. Moustakas, who had already taken off for second base, nearly gets thrown out on his sprint back to first base. Alex Gordon up. Ryan Goins makes a sliding snag to get Gordon out at first base. Moustakas advances to second base. David Price is pulled. Jays reliever Aaron Sanchez heading to the mound; throws a first pitch strike to Alex Rios. Rios hits a single to LF as Moustakas scores from second. Score is now 3-1. Alcides Escobar hits another single. Rios advances to second base. Jays pitching coach Pete Walker visits with Sanchez on the mound. Zobrist hits a bouncer to Chris Colabello at first base, who jogs to first and gets the out. 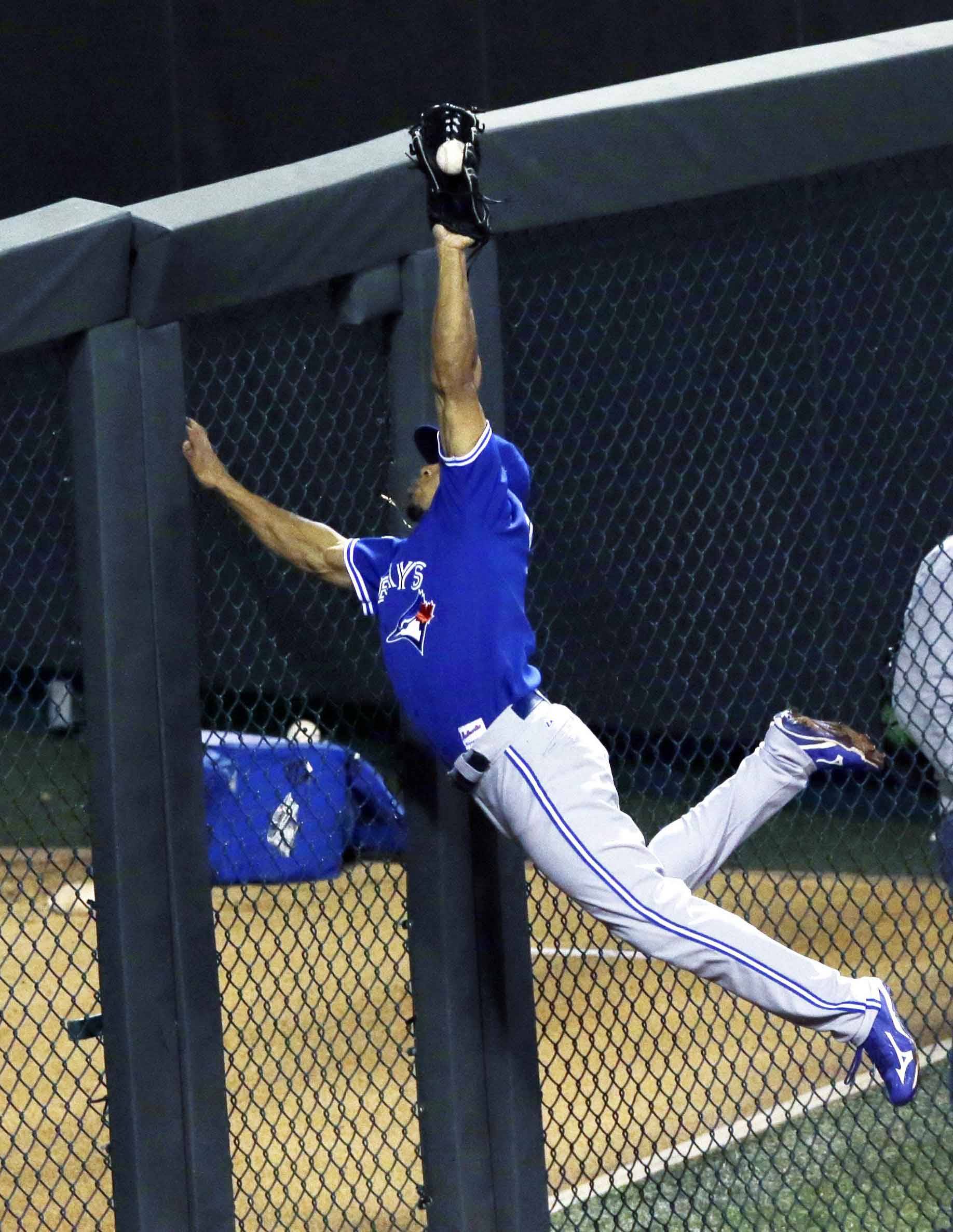 – Top of 8th inning: Royals pitcher Ryan Madson starts the inning. Ben Revere is up - complete with a cut in his arm from his flying catch last inning. He hits a grounder behind third base, shortstop Alcides Escobar fields it but can't make the throw to first in time. Revere safe. Donaldson is at the plate. He represents the tying run. Donaldson walks back to the dugout after watching the third strike paint the outside corner of the plate. One out. Bautista socks another homer to left field, tying the game. Edwin Encarnacion walks. Ryan Madson is pulled. Fans take the pitching break to complain about Fox Sports inadvertently putting up a presumptuous graphic:

This worries me somewhat. pic.twitter.com/kIBpKUDint

– Top of 8th inning (con't): Wade Davis is now pitching for the Royals. Chris Colabello up and pops up to Zobrist at second. Two outs. Troy Tulowitzki is up and the second ball gets away from catcher Salvador Perez. Encarnacion trots off to second on the wild pitch. Tulowitzki strikes out to end the inning, leaving Encarnacion stuck at second base.

Correction: This is sixth time Royals have given up lead of 2+ runs in 8th inning or later since start of '14 season.

– Bottom of 8th inning: A rain delay puts the game on hold for nearly 45 minutes. But once the tarp is lifted, Roberto Osuna takes the mound for the Jays. Lorenzo Cain is the first batter. He walks after working Osuna to a full count. Next up, Eric Hosmer, who drills a single into right field. Fielded cleanly by Jose Bautista who hits the cutoff man, Troy Tulowitzki. But Cain is already rounding third base. Tulowitzki fires the ball to Russell Martin at the plate but it's not in time. Cain scores. Royals lead again with a score of 4-3. No outs. Royals DH Kendrys Morales hits another single, this time to centrefield. Hosmer advances to second base. Terrance Gore comes in to run for Morales at first base. Mike Moustakas flies out to right field, where Bautista makes the catch. Catcher Salvador Perez up next. He hits a grounder to Troy Tulowitzki at shortshop, who flips it Ryan Goins at second. They get Gore. Goins fires to first and successfully turns the double play. Inning ends.

– Top of 9th inning: Wade Davis returns to the mound, after an hour-plus delay. Russell Martin hits a single to centrefield on the first pitch. Manager John Gibbons sends Dalton Pompey to run for Martin. Pompey steals second base on the first pitch, getting himself into scoring position. Pompey steals third base, no throw down. Kevin Pillar works a walk out of Wade. Runners now at the corners. 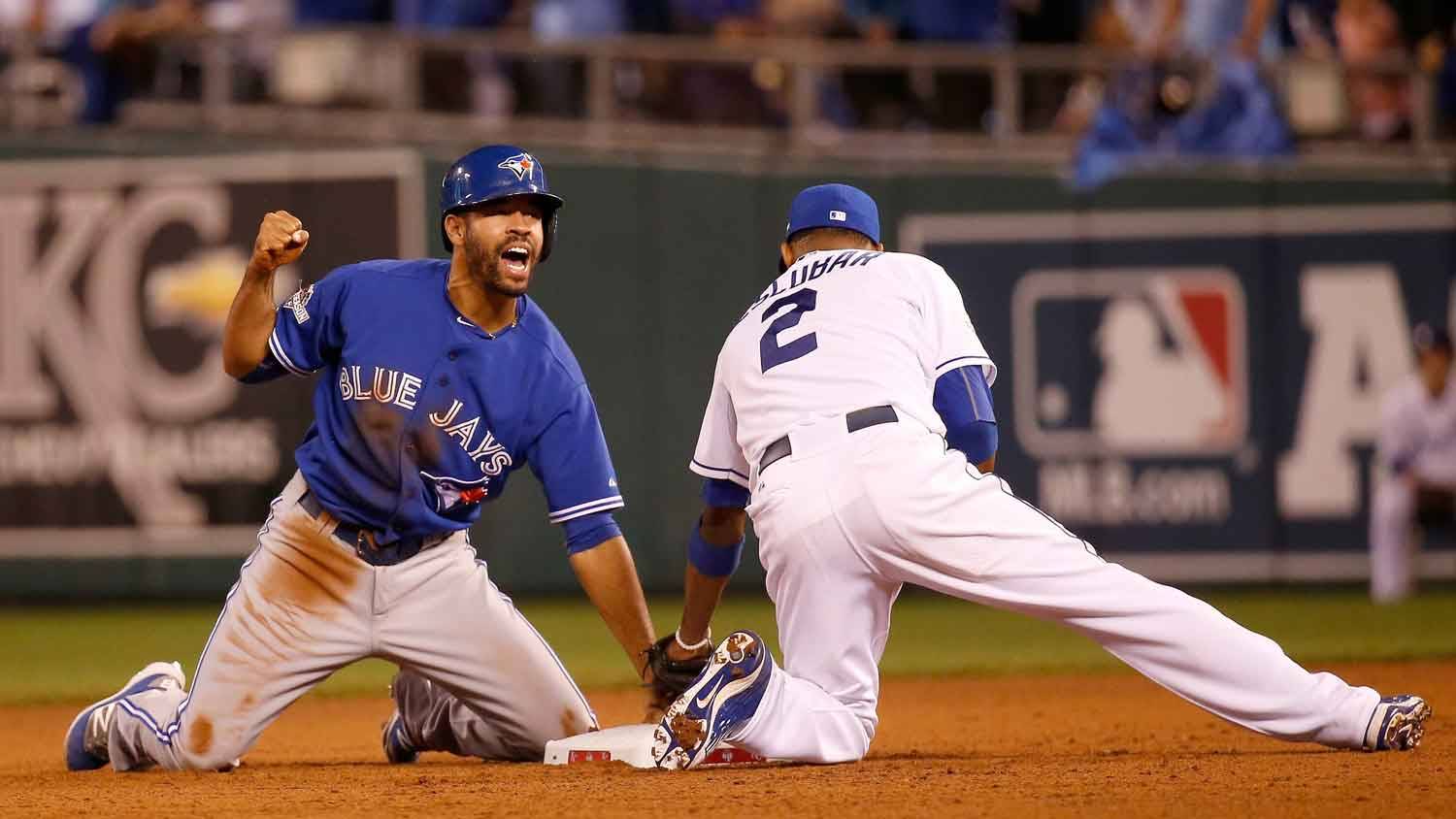 – Top of 9th inning (con't): Dioner Navarro pinch-hits for Ryan Goins. Navarro strikes out for the first out. Pillar steals second on Navarro's swinging third strike. Royals infield comes in, hoping to get the out at the plate. Ben Revere up. 1-0. 2-0. 2-1. 2-2. Revere swings and misses. Out number two. Josh Donaldson comes to the plate. Donaldson connects but hits it directly to Moustakas at third and is thrown out at first. Game is over. Royals win and eliminate Blue Jays from the postseason. And a nation deflates.

Thank you for the great season Blue Jays, loved every minute.