Upon entering the visiting team's clubhouse to prepare for an afternoon workout they could not help but notice the large sign that was posted on one of the walls.

"The road to success is always under construction," the sign read, rather poignantly given the dire circumstances the broken-down Blue Jays now find themselves.

The Blue Jays are under construction – make that reconstruction now that they've lost Brett Cecil, their bullpen ace, for the rest of the year.

The 29-year-old lefty tore the muscle in his left calf chasing down the Rangers' Mike Napoli, who Cecil picked off first base during the eighth inning of Friday's marathon at Rogers Centre.

After tagging out Napoli, Cecil limped off the field, his season over. That is not a good sign given the strong left-handed batting expertise that the Rangers feature in their lineup each and every night.

The frustrated Cecil was later joined by his equally dejected teammates after the Rangers earned a 6-4 victory in 14 innings to take a 2-0 hammerlock in their best-of-five American League Division Series.

The playoff has now shifted to steamy Texas for the next two games and the Rangers can now eliminate the Blue Jays with a win here Sunday night.

Game four, if necessary, will be played here on Monday.

If the Blue Jays can somehow hang on to force a deciding fifth game it will be played back in Toronto at Rogers Centre on Wednesday.

But that won't be an easy task.

Since the best-of-five divisional format started in 1995, of the 29 teams that that lost the first two games at home only two were able to pick themselves up off the mat and rally for the win: the 2012 San Francisco Giants and the 2001 New York Yankees.

"I tell you they were in good spirits [Friday] night – plane ride, bus rides – everything," Cecil said on Saturday. "I like to see that. I don't want to hear dead silence.

For Cecil, the timing for a tough injury could not be worse.

The last month of the season he has practically been unhittable, his devastating curveball helping to stymie opposing batters who have only been able to grind out four hits in 10.2 innings pitched in 13 appearances.

Along the way, Cecil has not allowed an earned run while tallying 22 strikeouts against the 38 batters he has faced.

"It was definitely a big loss, he's been so good for us, arguably the best reliever in baseball the last three months," Toronto manager John Gibbons said. "He's been up there with the best of them.

"Against this Texas lineup, so many lefties, that's where he really was important to us. But that's the way it goes, you move on."

Cecil was hoping the injury was not that severe, that he would be able to return to action in a couple of days. But then he was told he was gone for the year.

"When the doc told me I cried going back to my locker," Cecil said.

To fill his spot, the Blue Jays have added Ryan Tepera to the post-season roster, a right-hander who appeared in 32 games for the Blue Jays in his rookie season over three separate stints with Toronto in 2015.

Tepera has proven effective in spurts but he is hardly the equal of Cecil, whose absence will leave Aaron Loup as the only left-handed option out of the bullpen for Gibbons to call upon.

Gibbons said he considered reinstating left-handed starter Mark Buehrle to the roster as a replacement for Cecil but ultimately rejected the notion.

Buehrle is not used to coming out of the bullpen. And his effectiveness as a stopper against left-handed hitters is hardly overwhelming with lefty hitters averaging a .264 batting average throughout his career.

Gibbons said he is willing to roll the dice that Tepera can handle the job.

And he is hopeful that his world-class offence, which has been stifled to just six runs and 14 hits through the first two playoff games, can regain its stride.

"We need a big outburst with the bats, score a lot of runs, really," Gibbons said. "You look at our season, we score and we win. We score, and we score in bunches, and that's kind of our trademark. Their pitching's really shut us down the last two games so we need to do that to win.

"And I think hopefully, we do it one time, catch our breath a little bit and gain a little confidence, maybe we can hang onto this thing." 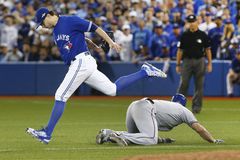 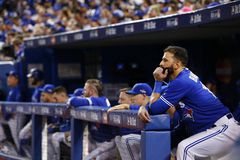