Pitcher David Price was allowed to leave for the greener pastures of the Boston Red Sox with little more than a "Nice knowing you" salutation from the Blue Jays, his former employer in Toronto.

Jose Bautista and Edwin Encarnacion are not getting any younger, and both are eligible to declare for free agency at the end of the 2016 season.

There is a logjam of candidates to play left field, including Michael Saunders, who has yet to prove that his surgically repaired left knee, which kept him sidelined for 2015, is ready to roll.

The likes of Jesse Chavez and J.A. Happ, who can charitably be described as serviceable pitchers over the tenure of their major-league careers, have been added to the fold to offset the loss of Price and Mark Buehrle, the rubber-armed innings eater whose contract expired.

Into all this uncertainty steps Ross Atkins, who was formally introduced on Friday as the new general manager of the Blue Jays.

A first-time GM, whose 15-year apprenticeship in the player-development system of the Cleveland Indians deemed him worthy of the Toronto promotion, said he sees no reason why the Blue Jays can't again be a force in the American League East in 2016.

"I think, first and foremost, I see this team as a very, very good one that people will fear," the 42-year-old North Carolina native said of the AL East defending champions. "And they're going to be competitive."

The state of the starting pitching, he admitted, will be something he will look "to fortify."

The team suffered a big loss when Price, who helped lead the Jays into the playoffs, became a free agent. On Friday, he officially became a member of the Red Sox after agreeing to a mammoth seven-year, $217-million (U.S.) contract.

Mark Shapiro, Toronto's new president and chief executive officer, who made the call to hire Atkins, said the Blue Jays realized the kind of money Price would command on the open market.

As a result, he said the club never "aggressively" tried to sign the lefty to a new deal to keep him in Toronto.

"It's a question of how you build a championship team within the parameters you're given. It's as simple as that."

Even without Price anchoring the rotation, Atkins said the mighty Blue Jays offence, which averaged 5.5 runs a game in the regular season, remains something to behold.

"I know, first-hand, pitching coaches that absolutely feared playing this team and lost sleep over thinking about the lineup," Atkins said. "Because how in the world are we going to attack the Toronto Blue Jays? And that team's intact."

The hiring of Atkins to replace Alex Anthopoulos, who walked away from a lucrative contract offer at the end of the season, marks the first major hiring for Shapiro, who has been on the clock for about five weeks.

And Shapiro didn't go far beyond his comfort level to find the new GM, plucking Atkins from Cleveland, the organization for which he had worked since 1991 before agreeing to the new job in Toronto.

"I met Ross about 20 years ago," Shapiro said. "He was a 38th-round draft pick with the Indians and I was the farm director for the Indians. It was clear through our one-on-ones … that Ross's questions were a little different than the other players."

Rather than inquire about the normal things young players will inquire about, such as the size of the meal per diem or whom they have to sit beside in the clubhouse, Shapiro said Atkins's thoughts ran deeper, more toward the side of process and player development.

Likely, Atkins knew the writing was on the wall with a playing career that never took him above the Double-A level in five years while he was with the Indians organization.

"I remember very well the day that I was standing in left field, and [Cleveland coach] Bud Black came out to me as a minor-league player and asked me what my life was going to be after baseball – while I was still in uniform!" Atkins said. "So, I knew all too soon that I needed to think about that."

Shapiro said the Toronto GM job boiled down to a competition between Atkins and Tony LaCava, a loyal Blue Jays front-office employee under the regimes of both Anthopoulos and J.P. Ricciardi.

After Anthopoulos left, LaCava was handed the GM's job on an interim basis until Shapiro sorted out who he wanted.

"In the end, I split hairs and thought carefully about it, and felt that Ross was the right person to take this organization and build upon its success," Shapiro said.

Shapiro said LaCava was equally qualified for the job, which is why he will remain in the organization as the club's new senior vice-president of baseball operations and assistant GM.

Atkins said he will allow LaCava to continue to act as the de facto GM until he can get the lay of the land in Toronto.

"I think it is important to state that Tony LaCava, for now, will hold that charge," Atkins said. "He'll hold that lead there, he will work us through the winter meetings and through this off-season as the leader of our decision-making. And I will look to support and complement him any way that I can." 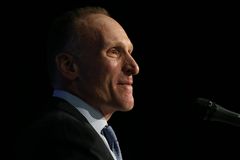 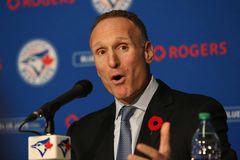 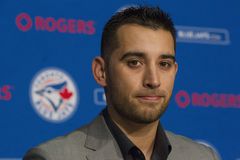