Dusty Baker got another managing job, this time with the Washington Nationals. And Major League Baseball got another black skipper, something the man in charge of the sport called "encouraging."

The Nationals announced Baker's hiring on Tuesday, nearly a month after firing Matt Williams when the club missed the playoffs.

With Baker joining the Nationals, baseball avoids what would have been its first start to a season since 1988 with zero black managers.

"I am certain that the Nationals, like all of our clubs, hired the best person for the job. It is encouraging that in this case the best person turned out to be African-American," baseball Commissioner Rob Manfred wrote in an email to The Associated Press. "This is a positive step and I am intent on making continued progress on diversity in the managerial ranks going forward."

When the Seattle Mariners fired Lloyd McClendon last month, it left no black managers in the major leagues. No season had started without at least one since 1988; in April that year, Frank Robinson replaced Cal Ripken Sr. with the Baltimore Orioles. Robinson later managed the Nationals.

"Dusty Baker is highly qualified, has years of managerial experience and is a proven leader," Manfred wrote.

In the 66-year-old Baker, the Nationals get someone who has worked 20 seasons as a manager in the majors and whose 1,671-1,504 record — a .526 winning percentage — includes the second-most victories among active managers. He led the San Francisco Giants to the 2002 World Series and reached the post-season a half-dozen other times.

He becomes the second-oldest manager in the majors at the moment, a few weeks younger than Terry Collins, who just led the New York Mets to the World Series.

Baker also managed the Chicago Cubs and, most recently, the Cincinnati Reds, who fired him in 2013. He has a reputation for being able to handle different clubhouse personalities, including managing Barry Bonds while with the Giants.

"We were looking for a manager to help us achieve our ultimate goal of competing for a World Series championship," Nationals owner Ted Lerner said in a statement. "During our broad search process we met with many qualified candidates, and ultimately it was clear that Dusty's deep experience was the best fit for our ballclub."

The Nationals were said to have settled on hiring former San Diego Padres manager Bud Black last week before contract talks with him broke down.

Washington said general manager Mike Rizzo and Baker will wait until Thursday to hold a news conference; Rizzo spoke about Williams' firing on a conference call.

In the news release about Baker's hiring, Rizzo said: "We are excited to bring him to Washington and put his steady demeanour, knowledge and many years in the game to work in our favour."

Rizzo let Williams go a day after Washington, which had World Series aspirations, finished the regular season at 83-79, seven games behind the New York Mets in the NL East.

Williams, who played under Baker with the Giants, had never managed in the majors when he was hired for the 2014 season. The Nationals won their division and he was voted NL Manager of the Year; a division series loss to San Francisco followed.

Williams then presided over a 2015 season filled with defeats, discord and the embarrassing spectacle of a dugout dustup between NL MVP front-runner Bryce Harper and teammate Jonathan Papelbon during a game the day after the team was eliminated from playoff contention.

Williams said he had no idea of the extent of the skirmish until much later in the day, even though he was in the dugout at the time, Williams said he hadn't been aware of exactly what happened — including that Papelbon grabbed Harper by the throat. None of his players or coaches told him about it right away, and he said he hadn't asked to know more.

On the day he announced that Williams would not return, Rizzo was asked what sought in Williams' replacement.

"Communication in the clubhouse, communication within the coaching staff, is vital," Rizzo said on Oct. 5. "Experience is always helpful. It always adds a layer of expertise to anybody's resume. We feel that where we're at in our timetable of winning a championship, we certainly would lean toward someone that has some type of managerial experience, especially at the major league level." 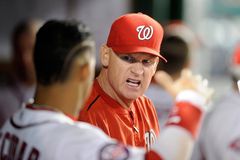 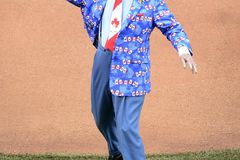