For Vanessa Riopel, there's nothing quite like releasing her curveball, then watching it dance through space before it dives away, dipping beneath the path of a swinging bat for an emphatic strike three.

Executing a brush-back pitch is almost as exhilarating, as is the feeling of standing on the hill gripping that small leather-covered ball, holding total control of the baseball game's tempo.

The softball option never interested Riopel, not even when she went countless summers without seeing another little girl on the diamond, nor these days, as the guys size up the petite blond woman when she takes the mound in their men's league.

Riopel has always wanted to be like the major-league pitchers who wind up on TV, the ones she has studied, with games on pause, zeroing in on the way their fingers grasp the hardball, filing it all into her mental tool box. But professional baseball for females is a global rarity, outside of a small Japanese pro league. It's not an Olympic sport for women, and females have often left it behind in early childhood to play softball.

Riopel, among others, sees great reason to keep that baseball door open.

The 25-year-old Quebecker is one of 18 women selected after a week-long tryout camp in Toronto, where 32 of Canada's best female baseball players competed to be part of something monumental for their sport. The squad chosen Sunday at the Rogers Centre will represent Canada as women's baseball makes its debut in the Pan Am Games this July in Ajax, Ont.. It's the first time the women's game has been included in a major international multisport competition.

If you're surprised Canada has a women's national baseball team, you're not alone. Canada's best female ball players face one question constantly.

"Maybe after the Pan Am Games, people will stop asking me 'Isn't it softball you play, like underhand pitching?'" said Riopel, a teacher and the only female in a Junior AA league in Victoriaville, Que.

Up to now, the biggest international event for this Canadian team has been the Women's Baseball World Cup, held every two years since its inception in 2004. Playing in each of those six World Cups, Canada has earned three bronze medals and one silver. The women finished just shy of the podium at the most recent one, last fall in Miyazaki, Japan. In the current International Baseball Federation rankings, Canada is fourth behind Japan, the United States and Australia.

Unlike many athletes who will represent Canada in the Pan Am Games, though, these women aren't carded Olympic athletes, who get financing under the national Own The Podium program. They have full-time jobs or study at university. Many got hockey or softball scholarships while maintaining their baseball careers on the side.

"Participation in the Olympics set off a wildfire of young girls playing hockey in Canada, and now we have a different stage of our own – the Pan Am Games – to show girls that if they love baseball, there are opportunities to play it internationally," said Ashley Stephenson, 32, a third baseman from Burlington, Ont., who has been on the national team for more than a decade. "In 2004, when Canada first got a women's national team, we didn't have that to aspire to."

But they are far from mere weekend-warrior ball players. Baseball has taken them around the world. Many have spent Canadian winters in Australia playing in an elite women's league. Some have even been approached about playing in the Japanese women's pro league. The Canadian team goes to Cuba for a short training camp each February.

"No, women's baseball isn't in the Olympics, and no, there isn't the opportunity to go play NCAA baseball on a scholarship for women, but those things didn't stop us from sticking with baseball," said Autumn Mills, a 26-year-old pitcher who may race back and forth between her duties as an athlete and a Halton Regional Police officer during the Pan Am Games. "The only difference between our game and the men's is size and strength. We have the baseball knowledge."

The women were evaluated this week through physical testing and five days' worth of exhibition games against Triple-A midget and bantam boys' teams from the Toronto area, fist-bumping and hollering in the dugout like teammates, but also battling one another for coveted roster spots. Duane Ward, Devon White and Roberto Alomar were among former Blue Jays who popped in to help.

The women use aluminum bats and the pitching ranges in speed from some 65 to 75 miles an hour, while some pitchers from the back-to-back World Cup-champion Japanese team can throw in the 80s.

"It's hard for people to comprehend that women do play baseball, the same sport the guys play, 90-foot bases, 60 feet 6 inches to the pitching mound," said veteran first-baseman and cleanup hitter Kate Psota, 28, also from Burlington. "At the Pan Am Games, you're going to see smart baseball, great technical baseball. We don't hit the ball as far, but we hit it just as often, and the women make plenty of diving catches."

Among the players on the team is Stéphanie Savoie, a power-hitting catcher with a rifle of an arm, from Drummondville, Que. She has been voted the world's best backstop at the past two World Cups. The program is experiencing its best depth of nationwide talent, as the selection camp had invitees between ages 16 and 32, representing many provinces.

"Our national program has grown a lot since we began 11 years ago, with some provinces really stepping up their programs and developing great players," manager André Lachance said. "The Pan Ams have really elevated their dedication. They showed up in better shape than I've ever seen them."

Canada kicks off play in the Pan Am Games against Cuba on July 20.

Canadian Pan Am Games uniforms pay homage to the past
April 29, 2015 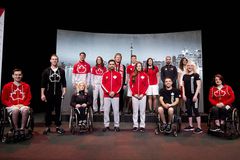 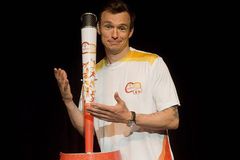 Kelly: Why the UFC's Ronda Rousey is the most notable fighter on Earth
May 15, 2015 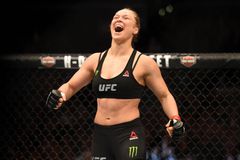