The only major question was whether it would be unanimous – and it was.

Aaron Judge and Cody Bellinger are baseball's Rookies of the Year, after their record-setting home run binges left no need for any dissenting opinions. Judge led the American League with 52 homers, the most ever by a rookie. Bellinger hit 39 and had to settle for the National League's rookie record.

Judge and Bellinger received every first-place vote available from the Baseball Writers' Association of America. Judge became the first New York Yankees player to receive this award since Derek Jeter in 1996. Bellinger gave the Dodgers a record 18th Rookie of the Year winner.

"Watching him from the West Coast, what he did on the East Coast, was awesome," Bellinger said. "I was a big fan of his, and met him during the All-Star game, and he's a humble dude. I think we're both reflecting, now that the season's over, on the kind of seasons that we've had."

This was the first time both Rookie of the Year awards were unanimous since 1997, when Nomar Garciaparra of Boston and Scott Rolen of Philadelphia won.

Judge is also an MVP finalist.

"Obviously it was an amazing, remarkable year that no one would have predicted," Yankees general manager Brian Cashman said. "When you drop 52 – I think he really should have had 53, one that instant replay didn't protect. ... It should be a higher number. It was just an incredible year."

Ichiro Suzuki in 2001 and Fred Lynn in 1975 are the only players to win the AL MVP and Rookie of the Year awards in the same year.

The Yankees entered this season with marginal expectations by their standards, but the prodigious power of Judge and catcher Gary Sanchez transformed them almost overnight into an exciting young team with tremendous potential. They made the post-season as a wild card.

"It's exciting times right now to be wearing pinstripes," Judge said. "To come up through the minor leagues with a lot of these guys, watch them develop, and now to see what they're doing at the major league level is really impressive."

Judge's 495-foot shot on June 11 was the longest home run in the major leagues this season, according to Statcast . Although he struck out 208 times in the regular season and 27 more in the post-season, the 25-year-old outfielder is one of a handful of reasons why the Yankees suddenly seem to have one of the brightest futures of any team in baseball.

New York came within a victory of the World Series this year, losing to Houston in Game 7 of the AL Championship Series. Bellinger's team made it to that final step, but Los Angeles fell to the Astros in a seven-game World Series.

Bellinger is the second straight Dodgers player to win Rookie of the Year. Shortstop Corey Seager did it last year.

"The future is bright in L.A.," Bellinger said. "I know that I'm excited, as well as the other teammates. Obviously, we didn't have the end goal this year, but we're going to try and take it to the next level next year."

Bellinger made his big league debut in late April. By the time he turned 22 on July 13, he had 25 home runs. The 6-foot-4 first baseman is an appropriate counterpart to the powerful Judge. They even hit from opposite sides of the plate: Judge is a righty and Bellinger swings left-handed.

"He's not just a guy that went up there and hit home runs," Judge said. "He was a guy that played high-calibre first base for them. He could go out there and roam centre field, left field, right field, wherever they needed him. To have that type of versatility and produce the numbers he did is something that you don't find too often." 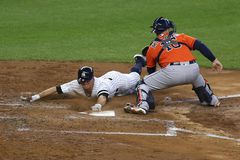 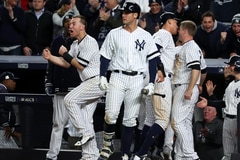