The Minnesota Timberwolves have taken on yet another new look, with D’Angelo Russell on his way to join pal Karl-Anthony Towns and Andrew Wiggins heading west to the Golden State Warriors.

In a swap of high scorers consummated just a few hours before the NBA deadline on Thursday, the Timberwolves acquired the dynamic point guard they’d been seeking for awhile in Russell and pulled the plug on their development of Wiggins, the mercurial first overall pick of the 2014 draft.

The deal also sent two little-used Golden State players, guard Jacob Evans and forward Omari Spellman, to the Timberwolves and routed two draft picks to the Warriors. They’ll get Minnesota’s first-rounder and second-rounder in 2021, unless the first-rounder is in the top three. Then it would roll over to 2022.

That means the Timberwolves, who overturned half of their roster this week, will have two first-round picks this summer, their own that’s likely to be in the top five and another one from Brooklyn via Atlanta courtesy of the four-team trade they helped finalize on Wednesday.

Russell had been on Minnesota’s radar for months, a dynamic point guard in his fifth season in the league after going as the second overall pick in the 2015 draft.

The first choice that year was Towns, a friend of Russell around whom the front office has been trying to rebuild the roster. Minnesota will be Russell’s fourth NBA team. He averaged 23.6 points per game for the injury-wrecked Warriors, a career high, after arriving in an off-season trade with Brooklyn.

The Wolves tried to woo him then, too, but Russell instead steered that sign-and-trade swap toward the Warriors, the five-time defending Western Conference champions who’ve won three NBA titles during that span. The 6-foot-4 Russell is playing the first season of a four-year, $117 million contract and is shooting a career-best 37.4% from 3-point range. He played in his first All-Star game for the Nets last season.

Wiggins, who was acquired from Cleveland the summer he was drafted in a trade that sent Kevin Love to the Cavaliers, never fulfilled his potential with the Wolves. He’s a shooting and slashing wing with the athleticism and frame to dominate on the perimeter, averaging 22.4 points this season. That’s an uptick from the past two years, but he’s still been capped by a pattern of inconsistency. He’s largely been a defensive liability, too, for a team that has persistently ranked among the easiest to score against in the league. The 6-foot-7 Wiggins is in the second season of a five-year, $147 million deal.

The Timberwolves, who have lost 13 straight games, have bottomed out in their first year under president of basketball operations Gersson Rosas as he attempts to remake the roster for a faster-paced, 3-point-heavy offence as directed by rookie coach Ryan Saunders.

When he was hired last spring, Rosas dismissed the notion of trading Wiggins and doubled down on the organization’s desire to continue to invest in his improvement. Wiggins is close to Saunders, and his skill set fit better with the new system.

“The reality is this: If I go out on the market to get a player,” Rosas said then, “I’m not going to find a player that’s got a bigger upside than Andrew.”

Rosas engineered Minnesota’s involvement in a four-team trade that saw five players depart, including defensive ace Robert Covington, and a first-round draft pick arriving. Russell is not a strong defender, but his passing and shooting ability ought to fit well with Towns on a team that has lacked a true ball distributor at the point since Ricky Rubio was dealt three years ago.

Towns was close to Covington, who came to Minnesota last season from Philadelphia in the deal that sent Jimmy Butler to the 76ers. After the Wolves lost to Atlanta on Wednesday, Towns was as sullen as ever.

“You obviously see my patience running low with a lot of things,” Towns said. “There’s no excuses.”

The Warriors are the only team below the Wolves in the Western Conference this season, with stars Steph Curry and Klay Thompson on the mend. The Warriors also struck a lower-profile deal before the deadline, sending Glenn Robinson and Alec Burks to Philadelphia for draft picks. 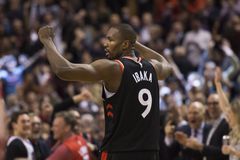 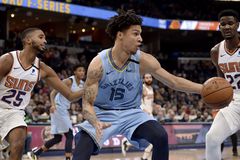 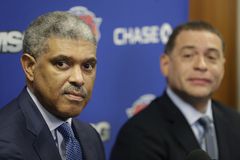