John Coon
SALT LAKE CITY
The Associated Press
Published May 2, 2021 Updated May 2, 2021
For Subscribers
Comments
Text Size
Please log in to listen to this story. Also available in French and Mandarin. Log In Create Free Account

Bojan Bogdanovic scored 34 points – including six 3-pointers – to lead the Utah Jazz to a 106-102 victory over the Toronto Raptors on Saturday night.

Jordan Clarkson added 15 points for the Jazz, Joe Ingles chipped in 15 points and nine assists while Rudy Gobert added 13 points and 16 rebounds. Utah held Toronto to just 13 points in the fourth quarter to win for just the second time in five games.

“This one feels good because it was a fight,” Gobert said. “Nothing was given to us. We had to go get it over 48 minutes.”

The Jazz limited the Raptors to 6-of-24 shooting in the fourth after Toronto shot 52 per cent from the field through the first three quarters.

Bogdanovic’s final 3-pointer punctuated an 11-3 run that started with an outside basket from Royce O’Neale and put the Jazz ahead 101-96 with 5:16 left.

Toronto went nearly four minutes without a field goal until Van Vleet and Anunoby scored back-to-back baskets to cut it to 105-102 with 20.2 seconds remaining. Ingles made 1 of 2 free throws in the final seconds to seal the comeback win.

“We were switching things when we needed to,” Jazz coach Quin Snyder said. “We were helping each other. We were physical.”

The Raptors lost their third straight game despite committing just 10 turnovers after getting shut down in the fourth quarter.

“We just picked the wrong time to get cold tonight,” Van Vleet said. “Execution was pretty good. We just ran out of gas there at the end and couldn’t make enough shots.”

Bogdanovic and Clarkson each scored back-to-back baskets as part of a 9-0 run that gave Utah a 20-16 lead midway through the first quarter. It highlighted a productive opening quarter for Bogdanovic. He scored 17 points on 7-of-10 shooting in the first 12 minutes – a career-high for a first quarter.

Toronto countered with three straight 3-pointers to keep the Jazz from building a bigger lead. The Raptors then surged ahead 41-33 early in the second quarter after Birch scored three baskets and assisted another over a two-minute stretch.

Van Vleet had the biggest impact offensively before halftime for Toronto. He scored 21 points on 7-of-11 shooting. His final basket of the half gave the Raptors a 62-53 lead.

“They played their hearts out,” Raptors coach Nick Nurse said. “They played very well. There’s a lot of great numbers – a high-assist, low-turnover game. You know, we did a lot of really good things.”

Utah rallied to take a 68-67 lead early in the third quarter after Gobert capped a 12-3 run with a layup. Toronto countered with three consecutive baskets, culminating in a 3-pointer from Malachi Flynn to surge ahead 74-68.

Raptors: Kyle Lowry did not play (rest). Van Vleet played for just the sixth time in the last 14 games. He missed eight games in April with a hip flexor injury. All five Toronto starters made a 3-pointer in the first quarter. Birch finished with a career-high six assists. Raptors outscored Utah 13-4 in fast-break points and 15-7 in second-chance points.

Jazz: Donovan Mitchell will be sidelined at least one more week while recovering from a right ankle sprain. Mitchell has missed eight straight games since injuring his ankle against Indiana on April 16th. … O’Neale finished with 10 rebounds. Utah gave up 29 points off 21 turnovers. The Jazz outscored Toronto 32-13 in bench points.

Trent Forrest has seen an increased role with the Jazz over the past couple of games with both Mitchell and Mike Conley sidelined. The rookie guard came up with some big plays down the stretch against the Raptors.

Forrest had a two-possession sequence during Utah’s go-ahead fourth-quarter run where he blocked Van Vleet’s step-back jumper and then sank a 3-pointer at the other end. He finished with seven points and three assists in 15 minutes.

“He is big time for us,” Bogdanovic said. “Whenever he stepped on the court, we got something big from him.”

Forrest is averaging nearly 17 minutes per game over his last three games, averaging 6.0 points and 4.0 assists per game in that stretch. 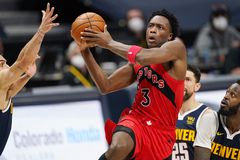 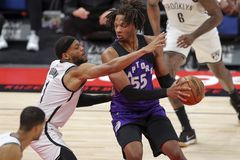 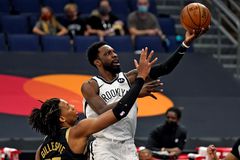