They are 10 years old and best friends forever.

“Forever” beginning today, when Fisher Cation and Trey Greger have already nailed down permission to stay up late to watch, they fervently hope, the Toronto Raptors defeat the Golden State Warriors in Game 5 and claim the first NBA championship decided outside the United States.

The best friends are also in negotiations with their parents to see if they might join one of the many “Jurassic Park” gatherings – this one in downtown Ottawa – that have sprung up around the country in support, believe it or not, of a professional sports team playing out of usually derided Centre-of-the-Universe Toronto.

Perhaps because there are none of the regional jealousies that so divide hockey, “We The North” has also spread east and west – and even south when thousands of Canadians showed up in Oakland, Calif., to sing O Canada and cheer on their team through Games 3 and 4.

It may also be about timing. In a spring where only three Canadian hockey teams managed to make the playoffs – the Toronto Maple Leafs, Winnipeg Jets and Calgary Flames – and none moved beyond the first round, in an early baseball season where the Toronto Blue Jays have been terrible, the Raptors have filled a void and, in doing so, their attraction has spread far, far beyond the known base of the Greater Toronto Area.

Fisher and Trey are part of a movement that was not foreseen by Fisher’s grandfather, a sports writer who has spent a lifetime around ice. Fisher was put into skates before diapers. He skated on the outdoor rink in the schoolyard, on the canal downtown and in rinks around his home in a western suburb of the nation’s capital. He skated well and was signed up for hockey as soon as he could hold a stick. He played a couple of seasons and then … quit to play basketball.

He says he feels “more involved” with a basketball than he ever did with a puck. Trey adds that there is so much more scoring in basketball that a game never gets dull, never seems locked up.

Today, the hockey net has been shoved off the driveway and into the bushes to make more room for the boys and girls who gather to shoot baskets and work on their between-the-legs dribble. Fisher wears a Raptors T-shirt, Trey a Kawhi Leonard jersey with No. 2 on the back. He wears the jersey to watch each Raptors game, and when he is sent to bed at the half, he lovingly spreads it over his bed so it will be the first thing he sees when he wakes.

Monday, however, he will wear it until the end.

“This,” Trey says, “is a once-in-a-lifetime opportunity – 24 years and the Raptors are in the finals.”

The boys love the way announcer Matt Devlin shouts out things like “from Yellowknife” and “from Halifax” whenever a Raptor scores a long three-pointer, called a “trey” by players and fans. They shout analyst Jack Armstrong’s familiar “HELLO!” when they sink a nice bank shot in the driveway. They love the generosity and exuberance of towel-waving superfan Nav Bhatia. They understand that many see Drake, the rapper fan of the Raptors, as a “funny guy” and others see him as “a jerk.”

What their parents love is the exercise, the unlikelihood of injury and the costs, basketball comparing to hockey as skipping stones compares to cutting diamonds.

For Christmas, the two boys and many of their friends asked for and received “shooter sleeves” that they wear everywhere, even to school. Fisher says the sleeve helps bring blood and strength to his right arm; Trey says, simply, it’s “all about looks.”

Now almost six months later, basketball has been dealing a bit of a body blow to hockey, a game that novelist Morley Callaghan once called “our own national drama” and writer Roch Carrier once declared that “Hockey is life in Canada.”

Nearly a half century back, Bruce Kidd and John Macfarlane wrote that, “In a land so inescapably and inhospitably cold, hockey is the dance of life, an affirmation that despite the deathly chill of winter we are alive.”

In a town such as Ottawa, after a record-breaking winter and a dismal, cold and wet spring, that “dance of life” is taking place under driveway and schoolyard basketball nets.

Or perhaps it is all just as simple as Charlie Kitts told The Washington Post last week: “Canadians want a winner, and we haven’t had one for a long time.”

Mr. Kitts tends bar at the Naismith Sports Pub in Almonte, hometown of James Naismith who, while teaching physical education in Springfield, Mass., tried to give his charges something to run off energy during the winter by nailing peach baskets high above the gymnasium floor and have them try to land a large ball in them.

Almonte is just a few minutes down the road from where Fisher and Trey are standing far back in the driveway and trying for three-pointers. They have seen the statue to Naismith on Mill Street, a bronze figure that, in recent weeks, has been subject to more selfies taken than Prime Minister Justin Trudeau.

Mr. Kitts is right in his simple analysis. The last Canadian team to win the Stanley Cup was the Montreal Canadiens in 1993, the same year the Blue Jays won their second and last World Series. Grey Cups in football have been raised in cities east and west, and the Mann Cup, emblematic of Canada’s other national sport, lacrosse, is yearly claimed by a national team, most recently twice in a row by the Peterborough Lakers. But there is something significant lacking: the U.S.A.

It was the late poet Al Purdy who understood this dynamic so perfectly when he declared that hockey is “a Canadian specific to salve the anguish of inferiority by being good at something the Americans aren’t.”

And so here we have a case of a Canadian team on the verge of being superior to any American team in basketball – yet there is only one Canadian, St. Lucia-born Chris Boucher, on the entire Raptors roster, and he’s played just four minutes in the playoffs. The president of the team is Nigerian, the coach American, most of the players from the U.S. There is a Spaniard, a player from the Republic of the Congo …

But there is also Pascal Siakam, who politely asks the delighted Canadian and bewildered American media if anyone has any questions in French for him.

And Mr. Devlin, the American native who has called Raptors games since 2008, went to an immigration office with his family the day after the opening match of the final and officially became Canadian citizens.

But most important, there is Mr. Leonard, a 27-year-old from Los Angeles who has mesmerized “We The North” with his final-second winning shot in Game 7 of the Eastern semi-final, who plays a game far less flamboyant and over the top than, say, a Charles Barkley or Dennis Rodman.

Instead, Mr. Leonard plays a game more in keeping with the sporting values passed down by the likes of Jean Beliveau and Gordie Howe: remain humble, deflect praise, simply go about your job and get it done.

More Canadian than that you cannot get. 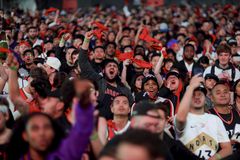 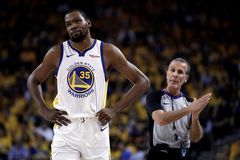 Yes, those are Raptors fans lined up for Jurassic Park three days before Game 5
June 9, 2019 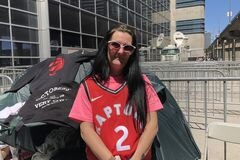