“Ask me next week when we’ve gone through this next one,” Thomaidis said this week from Edmonton.

The Canadians tip off their second of a three-pronged qualifying process on Thursday when they host 26th-ranked Cuba at Edmonton Expo Centre. They’ll play Puerto Rico (No. 24) on Saturday and the Dominican Republic (40) on Sunday, needing to finish top-two for a berth in one of the final qualifiers in February.

Canada clobbered this week’s opponents by a combined 92 points at the first qualifying event in September in Puerto Rico, despite missing WNBA standouts Natalie Achonwa and Kia Nurse.

Still, Canada, which was recently ranked a best-ever fourth in the world, is leaving nothing to chance this week. Nurse, who flew from Australia to play, and Achonwa highlight one of the strongest Canadian women’s teams ever assembled.

The FIBA Americas championships, traditionally held the summer before the Olympics, used to be the main Olympic qualifier for both Canada’s men’s and women’s teams. But FIBA completely rewrote the Olympic qualifying protocol for Tokyo.

The men played several series of games over two seasons to qualify for last summer’s World Cup. But, fielding a roster that was missing almost all of its stars, Canada failed to earn an Olympic berth at the World Cup in China. The men must now win their last-chance qualifying tournament in June (opponents and host venue TBA).

On the women’s side, the top-two finishers in each of this week’s qualifying events that are happening globally will be drawn into pools of four that will play in February (Canada will not host). The top three in each will book their Olympic berths.

Thomaidis appreciates that the new format allows her to bring her team together three times within a short span, but laments the lack of practice time. They’ll play Thursday after just three days of practice – and three days to shake off the jet lag.

“It’s really nice to be able to have these touchpoints and to get together with our athletes halfway through the season and then again in February, but the limited training time really poses a challenge for sure,” the coach said. “We’re going to learn a lot through this process, as far as how to structure our training, how much to put in, and how much is review and how much can they handle.

“We’re in a unique situation in that we’re crossing a number of time zones for our athletes to get back here, and some other teams aren’t in the same boat, so that’s a whole different challenge as well from the sport science perspective. Lots of things to take into consideration.”

Nurse, who is spending her second winter Down Under – she helped the Canberra Capitals to an Australian league title last winter – is one of a number of players who flew halfway around the world to play this week.

“It’s definitely a different schedule than what we’re used to,” she said. “Obviously for us, we’re fortunate that we don’t stay in one place very long, so I guess we’re kind of used to travel and living out of suitcases. But very fortunate to be able to see people obviously before the Olympics.”

Nurse noted that when Canada won its Olympic qualifier in 2015, the players didn’t see one another until the following summer ahead of the 2016 Rio Olympics, where they lost in the quarter-finals.

“So it’s great to continue to build chemistry and continue to get better, and I think it’s great that our leagues overseas do stop as well to allow us to come and do this,” Nurse said.

Like FIFA does with World Cup qualifying, FIBA shuts down global leagues to allow the women to play, and so Canada will have a full complement of players for the final round in February.

Thomaidis says she is excited to see what her team looks like this week, with the addition of Achonwa and Nurse.

“I think we’re going to have a size advantage on some of these teams, I think we’re going to be very dynamic and really rely on our depth and athleticism, play an up-tempo style of game, we want to get after it defensively,” Thomaidis said. “And again, just keep building on the success that we had last month.” 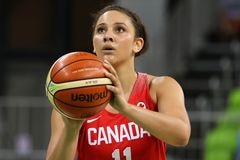 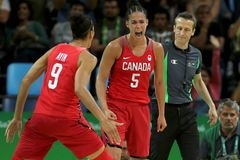