The Canadian women’s soccer team hopes to build on the Toronto Raptors’ NBA championship triumph by making some history of its own at the World Cup.

The soccer women have been following the basketball playoffs from France, which hasn’t been easy given the six-hour time difference with Toronto. The visiting Raptors captured the championship with a 114-110 win over the Golden State Warriors in Game 6 on Thursday.

“If you saw Kadeisha’s goal celebration, it was basketball-themed,” veteran midfielder Sophie Schmidt of Abbotsford, B.C., told a news conference in Grenoble on Friday, referencing Kadeisha Buchanan’s goal in the 1-0 win over No. 46 Cameroon last Monday in Montpellier. “We’re very excited for the Raptors. It’s massive for Canada.

“I’m not sure if anybody woke up at 3 a.m. to watch the game [Thursday]. … But first thing we did when we woke up was check our phones. That’s massive for Canada and we’re hoping to get the result [Saturday against No. 19 New Zealand] and have another success story for Canadians to celebrate.”

It’s a measure of the penetration of the Raptors’ success that the basketball question came from a BBC World Service reporter rather than a Canadian journalist travelling with the fifth-ranked team.

Buchanan, a 23-year-old from Brampton, Ont., who plays her club soccer for European champion Lyon, is a huge Raptors fan. After a solo celebration following her headed goal against Cameroon, a group of the Canadian players gathered up and Buchanan fired an imaginary basketball into an imaginary hoop held by fullback Allysha Chapman.

In Calgary, Stampeders receiver Juwan Brescacin of Mississauga broke out his Raptors jersey on Friday as the team prepared for its season-opener on Saturday against the Ottawa Redblacks.

“As soon as I can remember watching sports, the Raptors have always been my team,” the 26-year-old said. “I’ve been through all the heartache.

“I just wanted them to close the game out and be NBA champions for the first time ever.”

His feelings about the Raptors winning the NBA championship weren’t far off Brescacin’s euphoria of winning a Grey Cup last November with the Stampeders.

Brescacin said when the Raptors won Game 6 to claim the title on Thursday, he screamed for joy, drank a bottle of water and called his dad Justin Jones, who once played professional hoops for the Sheffield Sharks.

“We just talked about the game and how big it was for the city and just how happy we were,” he said.

Both Brescacin and Stampeders defensive tackle Ese Mrabure-Ajufo of Toronto grew up going to Raptors games.

“I predicted they would win, but that turnover at the end by Danny Green and [Pascal] Siakam, I had to stand up and I started sweating a little bit, too, for sure,” Mrabure-Ajufo said.

“My heart was racing like I was in the game and like I was about to get on the court. [Steph] Curry took the shot, he missed and I just knew, all right cool, we were good, we won.”

Meanwhile, Toronto Blue Jays first-round pick Alek Manoah, who signed with the club on Thursday, watched Game 6 with family in a hotel room near the baseball team’s training facilities in Dunedin, Fla.

“It’s actually funny because my stepdad is a Golden State fan and it was a close game the entire way through,” the pitcher said.

“I was extremely excited at the end that the Raptors won and extremely excited to see the support that Toronto gives that team. Not even Toronto, just Canada in general, the support they have for that team. And being able to bring a championship to Canada, it just means so much for the people there and that support group they have, and obviously it means so much for those players. I’m really looking forward to enjoying that feeling one day with the Blue Jays.”

Weather could be a factor again in Women’s World Cup clash between Canada and New Zealand
Subscriber content
June 14, 2019 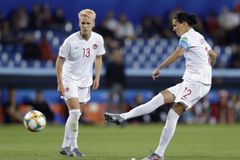 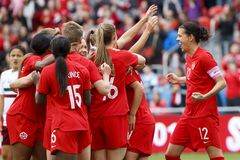 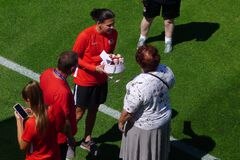