What do you get when the Raptors’ NBA championship celebration intersects with its 25th anniversary season? An unprecedented occasion for the club’s marketing department to dial up its imagination.

Plans for this distinctive season include a popup museum of its 2019 championship memorabilia inside Scotiabank Arena’s Galleria, and replica championship rings for the fans inside. A series of 95-Rewind nights will refashion the original hardwood court from the team’s first season, as well as the white dinosaur jersey. An 18-foot Raptors-themed art installation will come to life during Toronto’s all-night contemporary-art showcase Nuit Blanche this weekend, before moving to fan-filled Jurassic Park for opening night.

The club eschewed the traditional idea of a 25th-anniversary logo. It wanted to break from what it calls a “sea of same,” NBA teams that have commemorated milestone seasons with conventional logos featuring block numbers, roman numerals or flowing banners. Instead of a logo, the Raptors will promote a simple gesture they hope fans across Canada will flash with their two hands – a 25. One hand holds up two fingers, like a peace sign; the other holds up five fingers.

“We pride ourselves on being different,” said Jerry Ferguson, senior director of marketing at Maple Leaf Sports and Entertainment, as he stood beside a row of posters in a suite at Scotiabank Arena, to unveil the creative direction for the Raptors season. “We wanted to find a way for it to be participatory for our fans, and not just give them a logo that they can get on a T-shirt or hat.”

MLSE’s marketing team hopes that fans, who embraced the We The North battle cry, find their own unique ways to adopt the two-handed gesture – using it in selfies, making it with anything from emojis to foam fingers.

The 2-5 gesture is the inspiration for the giant art installation to be revealed at Nuit Blanche at the corner of Queen and Bay streets, in front of Toronto’s Old City Hall. The Raptors commissioned Toronto artists Esmaa Mohamoud and Bryan Espiritu to create two hands that stand 18-feet tall, modelling that gesture. One giant hand shows an intricate canvas that illustrates the first 25 years of the franchise, while other five-fingered hand features chevrons on an open palm to illustrate that the future is within reach.

The giant hands will move to Jurassic Park, outside Scotiabank Arena, in time for the Raptors’ home opener against the New Orleans Pelicans on Oct. 22. As the Raptors receive their championship rings, and the 20,000 fans inside get replicas, one of the 18-foot hands outside will be unveiled to show its own giant replica ring.

In co-operation with creative agency Sid Lee, the Raps marketing team had begun conceptualizing its 25th-anniversary season long before last year’s playoffs extended into a championship. They came up with the 2-5 gesture, and wrote a marketing slogan that could trace back to the team’s humble and rocky beginnings: “Twenty-five years ago, we were a basketball team, playing in a baseball stadium in a hockey town.”

After the Raps stunned the defending champion Golden State Warriors in mid-June to win the club’s first NBA title, the marketing team added an additional line to that slogan: “Today we’re world champs.”

“So how perfect that we would have envisioned two hands in a 25, like they were standing ready for us to drop a ring on one of those fingers,” said Shannon Hosford, MLSE’s chief marketing officer.

Raptors all-star point guard Kyle Lowry gave input on the design of both the championship banner to be unfurled from Scotiabank Arena’s rafters, and the diamond championship ring made by Canadian company Baron.

The arena’s museum will display items from the team’s run to the NBA title, such as game-worn jerseys and shoes. The Larry O’Brien Trophy will also be there, and journey out to Jurassic Park for fan selfies.

After the championship is celebrated on opening night, the franchise will turn its focus to commemorating its 25 years. There will be six ‘95-Rewind’ themed home games, when the Raps will wear the original white dino jerseys and play on a purple-accented hardwood floor like that of their debut season inside the SkyDome.

Those rewind nights include games against the Orlando Magic, Milwaukee Bucks and Memphis Grizzlies (who plan to wear original Vancouver Grizzlies jerseys for a classic Canadian matchup). Another will be the return visit of Raptors NBA Finals MVP Kawhi Leonard as a new member of the Los Angeles Clippers (Dec. 11). The last will be the final visit of Vince Carter as a player (April 10 with the Atlanta Hawks).

MLSE says its research shows an interest from its fans in revisiting the team’s many eras, from NBA startup, through lean years, the playoff strides, and finally to a championship team.

One example, it says, was a black long-sleeved shirt that OVO gave to fans at one of the home playoff games, which featured a variety of logos from Raptors history. MLSE noticed fans buying them online, on sites such as Kijiji, for hundreds of dollars.

“We had already talked about wanting to be authentic to our journey as we celebrated our 25 years,” Hosford said. “That was just one of the indications to us that we were going in the right direction.” 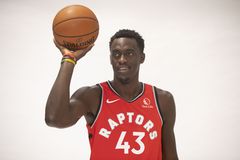 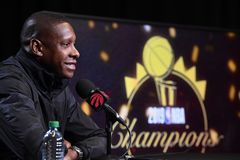 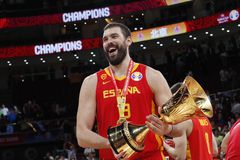