Nick Nurse has quite a few reasons to be thankful for David Stern.

The coach of the NBA champion Toronto Raptors first encountered Stern around 20 years ago. Nurse, who was coaching in London, met Stern – then the NBA commissioner – through a mutual friend and remembers how fascinating it was to have conversations with him. Fast forward a few years, and Nurse had an idea to bring a team from what was then called the NBA Development League to his native Iowa.

Stern and the NBA liked the idea. The Iowa team was born. Nurse was its first coach. The rest is history. And Nurse is one of countless people reflecting now on Stern’s impact, after the man who ran the NBA for 30 years died on Wednesday about three weeks after a brain hemorrhage.

“There’s no denying how much he grew the game. He was the leader behind all that,” Nurse said. “Obviously, lots of important people play important roles there, but still, somebody’s got to lead that thing and he was doing that at a level that was unseen.”

For all of Stern’s accomplishments – and there are many – growth of the game may be the biggest one of all.

Nurse is the perfect example. If what is now called the G League wasn’t born, at Stern’s behest, then Nurse probably wouldn’t be coaching the reigning champions right now. And if Stern didn’t push to reach out into more markets, including Canada, then the Raptors might not even exist.

“This was his baby,” Toronto guard Kyle Lowry said. “He helped grow this thing into what it is today. And you’ve got to give him a lot – I wouldn’t say all – but a whole lot of the credit.”

Stern, when he stepped down as commissioner, said growth of the league was his top achievement.

“My greatest accomplishment was in hiring the now 1,200 people – that used to be 24 – that have taken the league to where it is,” he said.

Some of Stern’s other accomplishments of note:

Stern turned the NBA’s all-star game – which long predated his work with the league – into a weekend festival. The slam dunk contest was added in 1984, the three-point contest in 1986, what started as the rookie game arrived in 1994 and the skills contest was born in 2003.

The game itself, always held on Sunday night to cap the weekend, is now just a part of the show.

“It was a showcase of what David Stern knew was the backbone of the NBA – its stars,” Larry Bird, the first three-point contest winner, said in 2014.

Boston’s Bill Russell was arguably the first black player to achieve superstar status in the NBA, though Stern always wasn’t a fan. He rooted for the Knicks, not the Celtics, and thought Harry Gallatin was a better player.

“That’s what fanship does,” Stern said.

In the end, Russell might have become Stern’s favourite player.

Stern loved Russell. He loved the way he expressed his political views. He loved his grouchiness. And when Stern saw the way Russell and Bob Cousy – a star white guard for Boston – played seamlessly together, he had a realization.

“Our sport was under duress because people said it was getting too black,” Stern said in his Hall of Fame induction speech. “I remembered this guy named Russell who played with this other guy named Cousy. The best basketball that I think ever existed in the world and it dawned on me that we had something to teach the world.”

With that, equality – all sorts of it, including racial and gender – became a passion of Stern. He championed the creation of the WNBA. He was Magic Johnson’s biggest advocate when the Lakers star announced he had been diagnosed with HIV in 1991. And he supported Johnson when he returned to the league after his first retirement, plus pushed for him to be part of the first Olympic “Dream Team” in 1992.

“We were able to change the world,” Johnson said.

The formula and the system has been tweaked a bit in recent years, but Stern also oversaw the league when the draft lottery was added and first used in 1995.

In short, the lottery allows non-playoff teams a chance to choose first in the next NBA draft. The NHL subsequently added a lottery of its own.

“The draft lottery is responsible only for ameliorating the possible side effects of having the same kind of draft that others have,” Stern said.

Stern inherited a troubled league – some teams were in terrible financial shape – when he became commissioner in 1984, and at that time adding a salary cap was considered risky.

Stern knew it would work. He was right, of course. The first cap was US$3.6-million. The cap now is around US$109-million. What it does, in simple terms, is make the teams and the players partners: If one side succeeds financially, so does the other side.

There was labour strife on his watch, numerous times – but the game has never been on better financial footing than it is now. 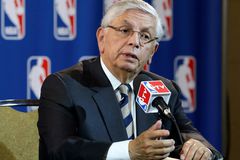 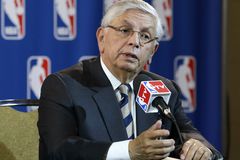