Coach Nick Nurse said the Toronto Raptors' double-overtime win over the Boston Celtics in Game 6 felt like “a chess match going at 100 miles an hour.”

So imagine the intensity Game 7 will have on Friday night (9 p.m. ET start), as both teams put their seasons on the line and fight for a spot in the Eastern Conference final.

For six wildly different games in this intriguing second-round playoff series, the Raptors and Celtics have thrown everything at one another as they alternated victories. There have been lineups big and small and defences in every shape. Each has inserted all manner of role players, and drawn up a variety of game-winning plays. There have been bumps, bruises, stitches and blood, pushing, shoving and fiery words exchanged.

“I said before [Game 6], when both teams bring it at a level where you know one can’t necessarily impose their will on another, that’s where the games become special,” Boston coach Brad Stevens said. “I wish I wouldn’t have said it, because it showed itself true, right? That was a special basketball game.”

After the reigning NBA champs tied the best-of-seven set 3-3, the series can be viewed in an entirely different light. Now both teams are worn down by heavy minutes played. They share equal numbers of inspired victories and cutting defeats. The Miami Heat sit watching, waiting to face the winner.

The series has been physical and hard-nosed. It features the NBA’s best two teams in defensive rating in this postseason – Boston is first in that category and Toronto is second.

A list of the NBA’s postseason “hustle” statistics is chock-full of players from the Raptors and Celtics. Hustle stats are a list of the deeply appreciated but rarely referenced plays that help win games, but don’t appear in any box score. Kyle Lowry tops the list in total charges drawn (7), while Kemba Walker is third (5). Lowry and OG Anunoby are first and second in loose balls recovered, 20 and 14, respectively. A whole host of players from both teams – such as Serge Ibaka, Pascal Siakam, Daniel Theis and Kemba Walke – litter the list of players who have contested the most shots in these playoffs.

Boston’s coach sees a common identity between the Raps and Celtics.

“Two teams that in a lot of ways, hang their hat on toughness and defending,” Stevens said. “And then, willing themselves to figure out a way to win games and, you know, I think that’s why I have nothing but respect for Toronto.”

Many in the basketball community commented on the intensity of Game 6, labelling it an instant classic, some saying it was the most exciting game of this postseason. Lowry’s gutsy 33-point performance prompted tweets from his peers, as he piled in six three-pointers, added eight rebounds and six assists, a pair of steals and a blocked shot in a dogged 53 minutes to help the Raps avoid elimination.

“Kyle Lowry is not appreciated as he should be #Winner,” tweeted Philadelphia 76ers star Joel Embiid.

“I love watching Kyle Lowry play!,” tweeted Magic Johnson. “I call him the Little General because of his toughness, leadership, scoring ability, basketball IQ, and will to win.”

Many players have played heavy minutes, and they face an unrelenting schedule of games every other day in the NBA’s bubble, so both teams focused on recovery and film study Thursday. They talked strategy, waiting for the chess match to kick up again.

It brings to mind something Raptor guard Fred VanVleet said last month before the playoffs began. Now it seems to truly resonate.

“It’s going to be hard to beat us four times,” VanVleet said in mid-August. “If you can do that, we’ll shake your hand and congratulate you. But I think we all like our chances.” 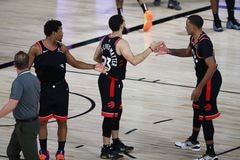 Opinion
Toronto Raptors did many things wrong, but still managed to force a Game 7
September 9, 2020 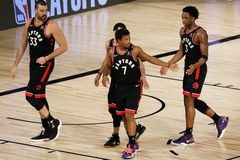