This week a big, sophisticated North American city went out of its mind over the future of a basketball player. A local news helicopter followed his suspected movements and carried them live. Fans swarmed the hotel where he was supposed to be having meetings. A sports broadcaster carried a breathless “Kawhi Watch.”

Over the top? Embarrassing? Juvenile? Pathetic, even? Some people thought so. Toronto, they said, was swooning like a ditzy teen over a pop idol. A successful, dynamic city shouldn’t be so needy. Why would it go into such a frenzy to keep an overpaid jock? Didn’t it have more important things to think about?

Let’s not be so hard on ourselves. Everyone needs a hero from time to time. Kawhi Leonard fits the bill. He helped give Toronto its first professional basketball championship. He brought the whole city to its feet with his death-defying buzzer beater. He inspired countless kids to take to the court and work on their skills. Those indelible memories remain, even now that reports say he is departing for the L.A. Clippers.

Mr. Leonard has a quiet way about him. In interviews, he often seems close to catatonic. He reserves all his intensity for the court, where he is relentless. That makes him even more appealing.

A million people poured into the streets of a buttoned-down city to see him hoist the trophy from a parade bus. It was a glorious moment, the kind that doesn’t come often. Naturally, Toronto wanted to make it last. Just as naturally, it wanted its hero to stick around and try to repeat the miracle next season.

Like the championship run, the Kawhi Watch brought the city together. Neighbours chatted about it on sidewalks. Office coffee corners buzzed over it. Cabbies offered their opinions. All week, the city was on the edge of its seat again. Would he stay or would he go?

The fever of uninformed speculation and rampant rumour reached its peak on Wednesday, the day of the helicopter chase. Thursday, July 4, gave way to silent worrying. Someone labelled it the Fourth of Kawhi. By Friday afternoon there was still no word.

Were the pleas to get him to stay a little much? Of course they were. That was part of the fun. Long before the final buzzer, restaurants were posting Kawhi Eats Free Here signs. They called it Ka’wine and Dine. A condo broker offered him his choice of luxury penthouse. A food company said he could have as much of their macaroni and cheese as he wanted. T-shirt slogans displaying his image proclaimed Kawhi Believe, Kawhi Me a River and Fun Guy, a reference to how a deadpan Mr. Leonard described himself at a news conference.

The mayor himself helped launch a petition urging the superstar to sign with the Raptors. John Tory asked Torontonians not to bug Mr. Leonard if they saw him in public. It might scare him away.

But along with the silliness, there was a note of civic pride in the Kawhi campaign. Winning the championship made Toronto glow all over. Seeing all those people cheering in the streets brought home what a vibrant, diverse metropolis it has become. “You’ve inspired us so much! Given us so much pride and unity. I love this city, grew up here and after living away 10 years came back because I missed it so much. I know you and your family could have a great life here!” said one contributor to the petition. “Kawhi, please stay because you are a fun guy and we are a fun city!!!” said another. Still another wrote: “Kawhi, you should stay because you embody what it means to be a Canadian due to your kind spirit, humble attitude and hard work.”

Finally, there was this killer pitch to the millionaire athlete. “I am committed to providing 20 per cent of the apples from my tree to you this apple season.” Twenty per cent, no less. Now if that doesn’t seal the deal, nothing will. 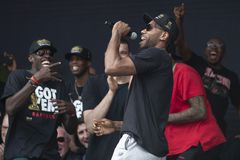 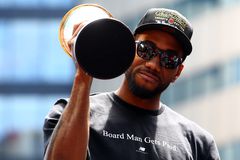 From public sightings to a helicopter pursuit, Toronto won’t take its eyes off Kawhi Leonard
July 4, 2019 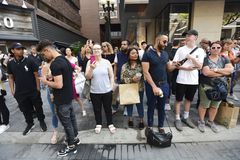