Some teams put an exclamation point on a victory. On Tuesday night, the Toronto Raptors knocked the Orlando Magic’s teeth out with their keyboard.

This series was a proper five-game kicking, the sort unseen in Raptors’ history. It wasn’t just its brevity. It was its brutality.

Toronto started the game on a 28-7 run. Every single one of those baskets seemed to be a lay-up. At one point, Pascal Siakam gave up on a cut to the basket and blind-passed to Marc Gasol. Why? Just because.

The Raptors won 115-96, a score that does not reflect how one-sided it was. Most of the 4-1 series played that way.

The margins of victory are different this year, but they’re not what’s changed. What’s changed is that the Raptors have stopped trying so hard.

Not the players, of course. They’re trying. Some of them are trying at truly elite levels.

But the club writ large. For the first time in Raptors history, this franchise doesn’t feel like the NBA’s poor country relation.

This series was over a couple of days ago. Everyone came back to Canada to play out the string. However, you are supposed to at least pretend this is still a competition. That’s how they sell all those ads.

No one could bring themselves to pretend.

The Orlando media asked their own coach how proud he was about the season his team has had, which is to suggest that it is over. They asked him this during his pre-game news conference.

“I’m not thinking about it,” Magic coach Steve Clifford lied.

Most of the rest of Clifford’s comments – pre- and post-game – were paeans to the brilliance of the Raptors.

“This is by far the best they’ve had here in this stretch,” Clifford said. “This is a terrific team. Terrific team.”

Clifford talked up the Raptors’ balance, their ruthlessness and their championship chances. It wasn’t a concession speech. It was a job interview.

On the other side, Raptors coach Nick Nurse said the only way he could see his team improving was being uniformly excellent “for the full 48 minutes.” Which is impossible. Which they went out and did.

This was still pre-game. Nurse then started in on the Maple Leafs (does that hurt?), wishing them luck and gushing about coach Mike Babcock.

Nurse is sitting up there before tipoff wearing a baseball cap with an “NN” logo – his own initials – laying his blessings on the hockey team in Canada and you’re thinking, ‘Wait, are the Raptors big league now?'

Yes, I guess they are.

As a general rule, this country doesn’t have big-league teams. It has teams that play in the big leagues, which isn’t the same thing. Canadian sports teams have no swagger.

The Leafs have some. Not much. Some. The Canadiens have more. The Blue Jays once had a bit and now have a double-limp instead. But that’s it. None of those teams have ever had much south of the border.

The Raptors were always the worst offender. Even when good, they couldn’t help but be the keeners of the NBA. This is the franchise a broadcaster once sniffed was “the world champions of giving away free T-shirts.”

Not so long ago, the Raptors really cared about those T-shirts. Hung on the back of every seat in the arena, the team created a brand-new look for each home playoff game. That’s a lot of T-shirts. And these were pretty nice T-shirts – in particular, many of us enjoyed the one featuring the psychopathic beaver.

During this playoff run, it’s the same T-shirt every time. This T-shirt is derivative in its design, dreary in its execution (e.g. no fauna of any sort and definitely no beavers) and mediocre in its quality. I don’t want to look a gift horse in the mouth, but this is a pretty terrible T-shirt.

If you spend a few hundred bucks on basketball tickets in Toronto and want a nice T-shirt to mark the occasion, you’re going to have buy one.

The Raptors have turned down the volume on the ‘We’ve arrived! For real this time! Okay, this time! All right, this …’ soundtrack. They don’t spend whole news conferences telling you how much they believe in their group (which is another way of saying that you don’t).

They are zen in their outlook, detached in their approach and a little bit big for their britches. Great teams often are.

The human embodiment of this big-leagueness is Kawhi Leonard. You could break down all the parts of his game that are special, but it’s easiest to say that he does what he likes out there. Leonard bullies people.

On Tuesday, he scored 27, hit five three-pointers and was a plus-38 for the evening. It still didn’t feel as though he pushed himself very hard.

Leonard’s unshowy self-confidence spread osmotically through the team during the Magic series. Toronto used to be a group of guys as steady as a shaken bag of cats. Every game tightened up late. Not one killer in the bunch.

There are a couple of them out there now, but only because Leonard plays the role of Red Baron. Show him the other team’s best player and he makes straight for him.

Leonard for DeMar DeRozan was a great trade when it was made. Then he started turning a bunch of lovable losers into closers and gave the franchise permission to take itself seriously. So what do you call it now? Best trade in civic history? We’re about to find out.

By his celebratory standard, that’s like dancing on a table top.

Toronto will face Philadelphia next. There’s a team with some unearned swagger. Orlando was a no-name club with no particular qualities. The 76ers have a bunch of names, but have achieved just as little and strut around like the Showtime Lakers.

That’s not just a good test, but the ideal foil for Toronto. These new Raptors won’t just want to beat Philadelphia. They’ll be out there looking to put the 76ers in their place. 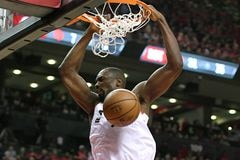 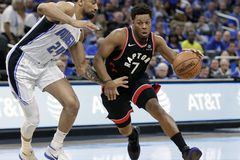 Leonard’s big night propels Raptors to dominant win over Magic and one victory away from clinching series Subscriber content
April 23, 2019 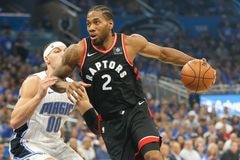