Kevin Garnett always found Seattle to be a difficult place for opponents. He played in 27 games there during his NBA career, leaving the court as a winner only eight times.

He remembers those days. And respects them, too.

In a wide-ranging interview this week with The Associated Press, Garnett covered plenty of topics, including the announcement over the weekend that he officially is a member of the Class of 2020 for the Naismith Memorial Basketball Hall of Fame, his relationship with fellow inductee Kobe Bryant, the coronavirus pandemic and his plans for the next five and 10 years.

But there was also a surprise: Garnett revealed a deep affinity for Seattle, to the point where he said he’d like to see the NBA return to that city – and said he would bring a team there if he could.

“If I have a dream, I would say that I would love to give be able to go and buy the Seattle SuperSonics and reactivate the Pacific Northwest,” Garnett said. “Seattle was huge to our league. I would love to be able to do that. That’s what’s up. If there’s one thing I could do tomorrow, it would be that.”

These days, it’s not that uncommon for Garnett to be thinking big.

He found out late last week that he had been officially selected to the Hall of Fame, part of a nine-person group that will include four going in as players – himself, Bryant, Tim Duncan and Tamika Catchings. He raved about each for various reasons; Bryant for his competitive fire, Duncan because they were elite at the same position, Catchings for her body of work.

He said he still savours his battles with Bryant and Duncan.

And the news came at a time where the coronavirus pandemic overshadows everything. Garnett has even limited how much news he can absorb, saying too much of what he sees is “scary.”

They are a necessary distraction, in what has been a trying year. Garnett does not have great things to say about 2020, with the pandemic coming when he is still personally reeling from Bryant’s Jan. 26 death in a helicopter crash.

“I ain’t going to front, man, since Kobe died, it’s been like upside down. 2020 has been [awful],” Garnett said. “So, I’ve just been trying to maintain and ... appreciating some of the small intangible things and actually enjoying life a little bit or trying to and be productive.”

For Garnett, that passion intersects with one of the passions Bryant had: Creating content. Bryant was connecting with people through children’s books, documentaries and other projects, and Garnett has a similar diversity in his content plans these days.

Garnett has a company called Content Cartel that he’s working hard to continue building now, even when basketball is in its hiatus for at least another several weeks.

And if he had one piece of advice for players today, as they deal with these uncertain times, it was this: Stay ready.

“Tomorrow is everything,” Garnett said. “So I think players obviously need to be locked into tomorrow and trying to create a tomorrow for not just them, but for their families. You’ve got to stay ready. I would stay as sharp as I could. It’s always something that you can do. We’re in this all together, man. This ain’t someone or one single individual going through it. We, everyone around the globe, are going through this.” 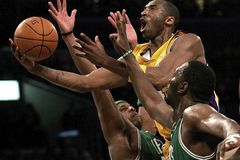 Kevin Garnett says 'farewell' after 21 seasons in the NBA
October 28, 2016
Person with knowledge of deal: Garnett gets 2 years, $16M from Timberwolves
July 9, 2015
Report an error
Due to technical reasons, we have temporarily removed commenting from our articles. We hope to have this fixed soon. Thank you for your patience. If you are looking to give feedback on our new site, please send it along to feedback@globeandmail.com. If you want to write a letter to the editor, please forward to letters@globeandmail.com.
Comments