The Raptors are getting healthier by the day, and Norman Powell and Marc Gasol showed that while helping Toronto demolish the visiting Washington Wizards 140-111 on Friday night.

Powell led the Raptors with 28 points in just his third game back from an 11-game layoff with a shoulder injury, scoring on everything from dunks to finger-rolls, along with four three-pointers.

Gasol, in his second night back in action after a 12-game absence to heal a hamstring injury, scored a season-high 20 points, along with six rebounds and five assists. That included a career-tying six three-pointers for the Spanish big man, none more entertaining than the calm, cool buzzer-beater he drained to end the third quarter.

“You never know in an NBA season what could happen – there are lots of variables. I think this team has done a great job of taking it on the chin and adjusting to the injuries and taking advantage of opportunities, playing hard, playing together and trusting the coaches,” said Powell. “That’s what you need in an 82-game season when lots of things are gonna happen, but as long as you trust each other you can figure it out along the way and I think we’ve been able to do that.”

Toronto’s Fred VanVleet, who is overcoming a hamstring injury, was not ready to return Friday night but is expected back Saturday. He’s the last of the Raps’ injured core still out after a rough first half of the season, in which nearly every star was sidelined at some point.

The Raps, for a second successive game, went with a big starting lineup – Gasol and Serge Ibaka, alongside Pascal Siakam, OG Anunoby and Kyle Lowry. It was one of 10 starting fives the Raptors have used this season, as Nick Nurse reiterated that he wants to keep his starting lineup fluid game to game.

Nurse described his feeling about the starters, saying they looked “big, and long, and wide – almost a little bit intimidating at the defensive end.”

The Raptors jumped to an easy 20-7 lead in the opening six minutes. They breezed past the Wiz offensively, turned them over seven times and prompted the visitors to call two frantic early timeouts.

Powell stole the ball from Isaiah Thomas and sped off for a breakaway dunk just 10 seconds into his first shift off the bench. He rollicked for nine first-quarter points to go with 11 from Anunoby and the Raps were well in command.

Lowry banged his right knee late in the first quarter while trying to absorb a charge from Washington’s Jordan McCrae. Toronto’s star point guard limped off to the locker room clenching the neck of his jersey with his teeth as he winced in pain, but returned to the bench just minutes later and to the floor midway through the second quarter. By then, his team was up by an imposing 23 points.

Back on the floor, Lowry didn’t look hobbled. At one point, he dribbled in on Gary Payton II, stepped out from a screen by Ibaka, then vaulted strangely over both of them to hit a 31-foot three-pointer. Jaws dropped throughout Scotiabank Arena, and his teammates shook their heads in amazement at their all-star point guard.

Things spiraled out of control for Washington, which is without injured John Wall and Rui Hachimura as they hover among the bottom four teams in the Eastern Conference with a 13-28 record. The Wizards have lost 11 of their past 16 games.

Nurse credited Powell and Gasol for the time they spent working on skills and conditioning while they were recuperating, and the assistant coaches who successfully put them through the work. “Fresh as daisies,” was how the coach described Gasol and Powell as they have returned to play.

Gasol had been playing for 19 straight months by the time he played to and NBA Championship and then a gold medal at the FIBA Basketball World Cup. While healing the lower body during the injury layoff, he was able to spend time working on his shooting mechanics, and it’s clearly paying off.

Powell had an upper body injury, but also got some valuable work time in during his recovery process.

“With the injury, I was able to get on the court fairly quickly and they cleared me to start shooting,” said Powell when asked what he did during his absence from game action. “I was working a lot with [assistant coach] Patrick Mutombo trying to simulate game situations, game speed, a lot of conditioning and running. I kept myself adjusted to the pace of the game and I think that really helped.”

With their 41st game in the books, the Raps have a 27-14 record at the official halfway mark of the season.

“They’re probably in the best position of everybody, because no one expects them to be where they want to be and they have every bit a chance to be in the Finals,” Wizards coach Scott Brooks said of the Raptors. “They’re right there with the best teams in the East.”

Toronto will be right back at it Saturday night in Minnesota against the Timberwolves. That will be the first of a two-game trip, which concludes Monday in Atlanta against the Hawks. The team returns Wednesday to play host to the Philadelphia 76ers. 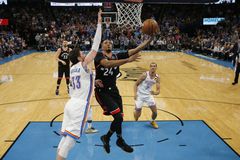