Pascal Siakam admits he performed below expectations during the Toronto Raptors appearance in the NBA’s bubbled playoffs. Instead of quietly slinking away from that disappointment, he invited cameras inside his off-season training this fall to document how he would respond.

In the past 18 months, Siakam became a champion, landed a huge contract and earned an NBA all-star nod, but then couldn’t find his rhythm in the bubble. He underwhelmed while his Raptors were beaten by the Boston Celtics in the second round of the playoffs and faced an avalanche of scrutiny. Now the 26-year-old enters his fifth NBA season eager to show he can stack up to the league’s best.

Siakam becomes the latest pro athlete to take command of his own storytelling. The star forward from Cameroon just launched a new three-part YouTube series titled Humble Hustle, which goes inside his workouts in Los Angeles with famed development coach Rico Hines during the short NBA off-season.

“I think we’re in an era where we can all decide to control what we put out there,” Siakam said on a video call with reporters after Wednesday’s practice in Tampa Bay. “I love YouTube, I love watching videos and content. So just finding ways to create your own content to put out.”

He said his partnership with Red Bull gave him the people and resources to pull off some polished-looking stories for his own YouTube channel – something he had been wanting to try. Having to rebound after his substandard playoffs provided the perfect story arc to kick it off.

“The bubble wasn’t Disneyland, I’ll tell you that,” he says in the video series. “I love that, the fact I was struggling and have to get back up.”

Before the COVID-19 pandemic shut down the NBA, Siakam averaged 23.6 points and 7.5 rebounds last season on 46-per-cent shooting from the field and 80 per cent from the line. When play restarted at Walt Disney World, Siakam’s numbers dropped to 16.9 points and 6.8 rebounds on 39.5-per-cent shooting.

The Raptors need the old Siakam back, especially because Serge Ibaka and Marc Gasol left in free agency. He must quickly adapt to playing alongside different big men: newcomers Aron Baynes and Alex Len, and returning Raptor Chris Boucher, whose role will evolve.

Siakam said he worked on his balance, his strength at the rim, on finishing better, being more explosive, and moving better. He usually likes to get away from cameras and enjoy his privacy during the off-season, but he made an exception in recent months to show himself ‘back in the lab’ working.

“It was definitely weird, because I’m definitely a private person. You know, I take pride in that – having that circle of people I’m with all the time, and being away from the scene a little bit,” Siakam said. “So it was a little weird, but I just thought ‘why not?’”

After returning from two preseason games in Charlotte, the Raptors held their first team practice at their new temporary practice facility on Wednesday, inside a hotel ballroom in Tampa Bay. The team erected it to replicate what they have in Toronto at OVO Athletic Centre, including basketball courts, a weight room, locker rooms, offices, a training room and space to watch film.

“It blew my expectations away … It’s amazing that they can do what they’ve done with this space,” head coach Nick Nurse said after the practice. “Our organization, they’ve given us everything we need to be successful.”

On Thursday, the team will experience another first. The players hope to practise inside their temporary stadium, Tampa’s Amalie Arena, also home to the NHL’s Tampa Bay Lightning, on their own personalized Raptors hardwood floor. The Raps will hold their first, and last, preseason game there on Friday, against the Miami Heat. A limited number of fans – a first for the Raps since the shutdown – will be able to attend. Fewer than 3,200 seats will be available for Friday, compared to 3,800 seats for regular-season games. There will be no floor seats and no seats sold within 30 feet of the court. Additional measures will include fans wearing masks, physical distancing in the stands and a health-survey screening for all visitors upon arrival.

“We’re just confident that they are taking all the measures and protocols and things that need to be done to make it safe,” Nurse said. “It’s got to be done that way.”

Toronto’s regular season opens in Tampa on Dec. 23, as they play host to the New Orleans Pelicans. 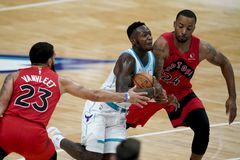 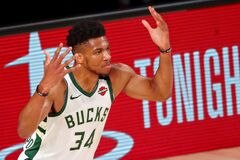 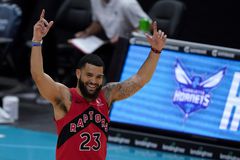