Shortly before 4 p.m. ET on Wednesday, it was an oddity that the Milwaukee Bucks had not yet appeared for their scheduled game in the Florida bubble.

NBA officials went to the Bucks locker room to figure out what was going on.

Their opponents, the Orlando Magic, had come out to warm up. A few minutes before tipoff, they left as well. The NBA boycott of 2020 was on.

And just like that, we began to reimagine the relationship between labour and capital, at least as it applies to professional sports.

The issue of a boycott was being discussed by the Toronto Raptors on Tuesday afternoon.

On Tuesday night, Toronto players met with their Boston counterparts to discuss a plan of action following the police shooting of Jacob Blake in Wisconsin. The two teams were scheduled to begin a playoff series Thursday.

On Wednesday afternoon, Pascal Siakam came out to speak on behalf of the Raptors. He refused all questions of a basketball nature. He only wanted to talk about the Blake incident and its aftermath.

Someone asked if he regretted entering the bubble.

Siakam did not wind around to an answer. He seemed to be talking aloud to himself.

The next player scheduled to speak, Serge Ibaka, took a pass. At that point, it was unclear where this was headed.

A few hours later, the Bucks made it clear.

Shortly thereafter, the league’s unofficial spokesperson, LeBron James, tacitly endorsed the slowdown with a tweet: “WE DEMAND CHANGE. SICK OF IT.”

James’s Los Angeles Lakers had been scheduled to play in the evening’s late game.

Within minutes, the NBA postponed the rest of the evening’s program. According to a league communique, all those games will be rescheduled.

Then we heard that every player in the league had been invited to a meeting in the bubble to discuss next steps. And then Major League Baseball’s Milwaukee Brewers called off their game against the Cincinnati Reds. And then the NHL announced a … sigh … “moment of reflection” before Wednesday’s games. Why bother doing anything if that’s what you’re going to do?

Hockey aside, the whole thing was starting to get a Ten Days That Shook the World vibe, and not just because so much was happening so quickly.

There is no precedent for this sort of concerted political action in modern professional sport. Athletes have refused to work or been refused the opportunity to do so, but there is no high-profile instance in which the players as a group have taken a principled stand that costs a lot of people a lot of money and their employers have so meekly complied.

There are too many moving parts in sports to allow such freedom – schedules, fans in attendance, broadcasters, advertisers, sponsors. All those considerations were pushed aside Wednesday by a unique combination of political agitation and a global health crisis.

However, we’ve been headed in this direction for decades, since the advent of players’ unions, free agency and the disruption of media that allowed the pros to control their own brands.

Now, at least temporarily, the athletes have taken control of the means of production. They will determine when, if and how sports continue. They are in a position to issue demands and expect they will be met. They can revisit their positions later and amend them. They can do whatever they like.

And no one – least of all ownership – is in a position to issue counter-proposals. The moment is too fraught for that. An open argument might provoke tangible unrest among real, non-basketball playing people. Handled poorly, this could get ugly in a hurry.

NBA players just moved their relationship status from “friends of the cause” to “on top of the barricades.”

It’s not clear what happens next to the NBA season. As of this writing, no consensus had been announced.

Guessing where this goes from here is a mug’s game, because you’d be working off paradigms that got wiped away on Wednesday night. The rules of what is and isn’t possible have shifted. The players’ key demand – “change” – will mean a dozen different things to a dozen different people. We could now be entering a period of sustained activism, or one of factionalism, or some combination thereof. Things could get started again and end just as quickly.

It’s an overused cliché in sports that an injured player is “day-to-day.” We’re all day-to-day all the time. But now the NBA is, too. You’d put the likelihood of a completed postseason somewhere around 50-50.

And let’s say they do manage to get it done? This isn’t over. Having so decisively taken power, the players would be foolish to give it back. Which isn’t to say they won’t. Only that it wouldn’t make much sense.

That means the NBA players’ union has just ceased to be a bunch of rich guys agitating for improved free-agency considerations. Instead, they have become a 21st-century Paris Commune.

How long before the NFL players’ union and the MLB players’ union start thinking the same thing. (The NHL has already proved how little it is interested in rocking the boat.)

Those other sports lack the cohesiveness of the NBA players, or the pliability of NBA owners. But once you see something is possible, it becomes far more so. This doesn’t end here.

The events of Wednesday night have their roots in righteous anger and a very specific moment in time. But that’s how most seismic change begins. 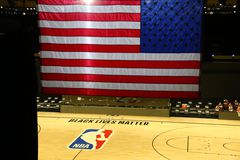 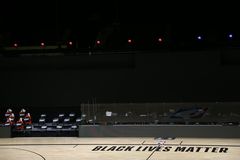