Nikola Jokic had 23 points, 18 rebounds and 11 assists for his 12th triple-double of the season to lead the Denver Nuggets over the short-handed Toronto Raptors 133-118 on Sunday night.

Jokic has 43 triple-doubles in his short career, completing his latest by feeding Jerami Grant on a dunk that helped the Nuggets pull away from the Raptors, who lost their third straight.

Grant finished with 16 points for Denver, which had eight players score in double figures.

Toronto played without Serge Ibaka and Fred VanVleet for a second straight game, but got a career night from OG Anunoby, who finished with 32 points on 12-of-16 shooting.

Jokic had 10 points and 10 rebounds at halftime and was already three assists shy of a triple-double.

The Raptors withstood the hot shooting to tie it at 60 in the second quarter, and trailed just 73-69 at intermission. It was a two-point Denver lead late in the third quarter, but the Nuggets opened up a 112-101 lead with 8:10 left in the fourth.

Toronto twice cut the deficit to five points, but Denver closed it out for the win. Jokic got his ninth assist on a court-length pass to Gary Harris for a dunk midway through the fourth.

Toronto’s next game is at Phoenix on Tuesday night. 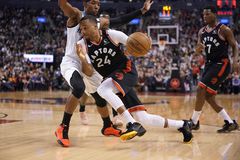 Norm Powell cleared to practise as he nears return to Raptors lineup
February 27, 2020 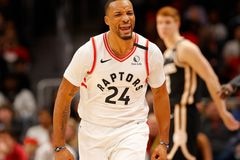 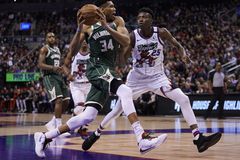