The immediate aftermath of an NBA championship is an experiment in social chaos.

Suddenly, there seem to be a million people with backstage passes wandering around in the bowels of a stadium. The place reeks of Champagne. Decorum disintegrates. The players will talk to – even hug – any schmuck who approaches them.

For just a moment, the NBA becomes a classless society.

A bunch of us were standing around in the midst of this tumult at Oracle Arena on Thursday night, after the Toronto Raptors beat the Golden State Warriors to win the NBA crown, trying to be still while everyone else wasn’t. There was an especially loud clatter and a bunch of hooting from behind a curtain leading to the Raptors’ locker room.

Ten heads turned to see who was doing all this inarticulate bellowing. Kawhi Leonard stepped from behind the curtain.

“What’s uuuupp???” Leonard yelled at no one in particular. Everyone gawked.

Not because he was wearing ski goggles, completely soaked and was awkwardly palming a bottle of plonk. But because Leonard had spoken. Out loud. In public. In front of humans he is not related to.

That was a new one.

Leonard – usually so taciturn that were he to stand in your living room for five minutes, you’d mistake him for furniture – had suddenly grown a personality. An NBA title does strange things to a man.

Throughout the celebrations, a lot of mental energy was devoted to reading Leonard’s expressions. He was happy. Smiling, even, which looked vaguely painful.

But was he happy happy? Was he stick-around-for-a-while happy? Was this win the incentive Leonard requires to re-sign with the Raptors and turn one great campaign into the league’s next Ottoman Empire?

When Leonard was (hurriedly) quoted as referring to the Raptors as “they” in his postgame remarks, rather than using “we,” it was an all-caps SIGN and PORTENT of DOOM.

Except it wasn’t. He hadn’t said that. The Raptors’ future is now being determined by the dispersal of random pronouns. That’s how silly this has become.

Anybody who says they know what Leonard is thinking is only guessing. Leonard has never spoken about his plans. He’s never leaked his plans. He doesn’t have to tell anyone his plans until the free-agency window opens on July 1, and even then he can wait as long as he likes before deciding.

Raptors executives will tell you they believe they have the inside track on securing him, but none will go on the record or even appear very confident while speaking in secrecy. They know how bad that will look if it doesn’t work out.

After Thursday’s win, Leonard finally admitted what everyone had assumed – that he hadn’t been filled with joy when he found out he’d been traded to Toronto.

“We all know where my destinations were,” Leonard said.

Actually, no, we all don’t. No one is sure where Leonard wanted to go. Because he doesn’t tell anyone anything, ever, under any circumstances. It’s an effective system of deterrence.

But, according to Leonard, he gave in quickly to the idea. He texted Kyle Lowry a day after the trade and said, “I know your best friend [DeMar DeRozan] left. I know you’re mad. But let’s make this thing work out.”

Everybody on the outside thinks this stuff is the CIA meets Google’s underground bunker meets the Illuminati. That there are a bunch of minions running around, manipulating events. They’ve seen too much television.

This is how sports actually works at the highest level – one stranger texts another stranger and goes, “So whaddya think?” and then they win it all. Simple.

That’s how the next bit will go as well.

Leonard will probably end up in the place that is easiest for him. Home in Los Angeles is one option, but Toronto must seem pretty easy, too. The Raptors kept him healthy, surrounded him with quality and can offer him far more money – about US$190-million, give or take, over five years – than anyone else.

The person who will do the offering is also an X factor. Almost simultaneous with Thursday’s victory, ESPN’s Adrian Wojnarowski – the voice of God, in NBA media terms – reported the Washington Wizards are preparing to offer Raptors president Masai Ujiri as much as US$10-million a year to take over their operation.

It’s an unheard of amount for that sort of job. Whoever takes it will earn their salary. The Wizards are a colossal, unfixable mess.

Ujiri does like a challenge. His wife, Ramatu, is from D.C. There are reasons to think this a credible threat.

But Ujiri has it good in Toronto, where he is still under contract. He can do what he likes here. He has no minders. After Tim Leiweke left as Maple Leaf Sports & Entertainment’s chief executive in 2015, and though he has no pure business experience, Ujiri was offered Leiweke’s job.

That’s the esteem in which he was held by his employers. We can safely assume that esteem has grown exponentially since.

This is despite reports Ujiri was involved in a shoving match with an Alameda County sheriff’s deputy immediately after Thursday’s game. This silly incident – in which Ujiri was apparently denied access to the floor because he wasn’t wearing a gold arm band – highlights how tumultuous things get after a final. This is doubly true of an NBA Finals, where there is no barrier to the court.

What exactly did this officer think was happening? That a 6-foot-4 man in a $4,000 suit holding a credential in his right hand was storming the floor? To do what exactly?

The only infraction committed here is the criminal absence of common sense.

In a sane world, it would be settled with a quiet word and a mutual apology. But we do have the news cycle to think of.

As for Ujiri leaving, it would be an odd sort of person who would spend five years building themselves a dream house, drive the final nail and then say, “I guess I’ll move now to a tin shack down by the river.”

The more likely scenario is that Ujiri stays in Toronto and gets the mother of all raises. That may be contingent on one small administrative task – signing Leonard. Should he manage that, Ujiri becomes the biggest dog in a league of full of alphas.

Ujiri looks up to a few executives. Prime among them is R.C. Buford, the seldom-heard-from Svengali behind the San Antonio Spurs’ unlikely dynasty.

If Ujiri signs Leonard, he’s the new Buford. But even more so, since Ujiri didn’t build his team through the randomness of the draft. He did it by force of will.

When you worry about what happens next, that’s what you might put your faith in. That everything to this point – though not easy or predictable – has made sense. You can see where the pieces were meant to fall, in what logical order and why they did so.

Leonard wants stability. Toronto gave it to him. Ujiri wants control. Toronto surrendered it. Ujiri needs Leonard and, on some level, Leonard needs Ujiri. Their legacies are now twinned.

If one man succeeds, so does the other. There is no more mythic NBA story than one involving a student and a teacher – Bill Russell and Red Auerbach; Michael Jordan and Phil Jackson, etc.

Neither Leonard nor Ujiri is working for money any more. They’re working for history. The two of them have done something special together. Now they can do something epochal.

The Raptors stand on the frontier of back-in-the-day Boston Celtics territory. If they stick together, they can do something big.

That’s a powerful incentive for elite sportsmen. To make your mark in a lasting way in a field that is, by its nature, ephemeral. You can’t be the best forever, or even very long. The best is always changing.

But the best of an era? The sort of best that is spoken of decades later? That’s a distinction attainable by very, very few.

That’s what the Raptors could do next. All they need is the co-operation of two men who demonstrated this year that those are the terms by which they define themselves. 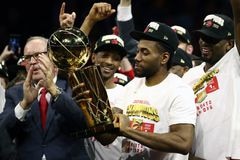 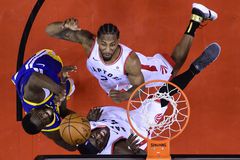 Opinion
The Raptors steal the Warriors’ identity – and Kawhi Leonard takes his place as a Canadian sports hero
June 19, 2019 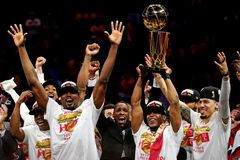